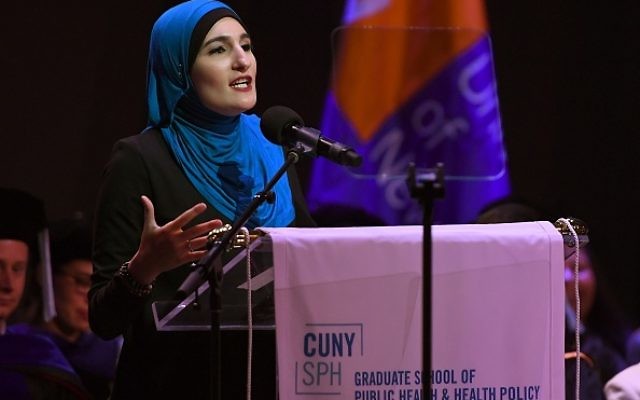 Linda Sarsour, co-organizer of the National Womens March and one of TIME Magazines 100 Most Influential People speaks the keynote speaker at the CUNY Graduate School of Public Healths inaugural commencement ceremony June 1, 2017 at the Apollo Theatre in Harlem. / AFP PHOTO / TIMOTHY A. CLARY (Photo credit should read TIMOTHY A. CLARY/AFP/Getty Images)

Palestinian-American activist Linda Sarsour said she is the target of  the “right wing, alt-right” and “right wing zionists” after being accused of withholding $100,000 that a fund she helped launch had promised to a neglected Jewish cemetery in Colorado.

The money would be disbursed, she said, after the organization handling the fund received a detailed plan from the cemetery.

Sarsour was responding Tuesday to an article on the Jewish news website The Algemeiner alleging that a campaign she set up in February to raise funds for vandalized Jewish cemeteries in St. Louis and Philadelphia failed to deliver funds promised to the Colorado cemetery.

The Muslim-led crowdfunding campaign raised $162,000 from nearly 5,000 donors, exceeding in the first few hours its $20,000 goal to help repair the Chesed Shel Emeth cemetery in St. Louis. Jewish leaders who otherwise object to Sarsour’s support of the Boycott, Divestment and Sanctions movement against Israel appreciated her gesture.

According to the campaign, some $40,000 was sent to the cemetery in St. Louis. Another $5,000 each went to help a vandalized Jewish cemetery in Rochester, New York, and repair the Chicago Loop Synagogue following an anti-Semitic attack. The Philadelphia cemetery turned down the money, saying it was not in need of further assistance.

The Algemeiner reported Tuesday that the Golden Hill Cemetery in Lakewood, Colorado, had yet to receive a check for approximately $100,000 as promised by Celebrate Mercy, a Muslim nonprofit that partnered with Sarsour on the project.

Golden Hill was not among the vandalized cemeteries, but rather requested funding from Celebrate Mercy at the suggestion of Jennifer Goodland, a local history buff and photographer who had taken pictures of the cemetery’s overgrown plots and toppled headstones. In a Facebook post Wednesday, Celebrate Mercy said it was awaiting a revision of Golden Hill’s “detailed funding request” and that “we are doing our due diligence to all the campaign donors to carefully evaluate all proposed costs and set up a disbursement schedule for the funds based on achieved milestones.”

“Over the next few months, we intend to fully disburse all remaining funds to help other vandalized Jewish cemeteries and centers nationwide,” the Facebook post read.

Goodland, commenting on the Celebrate Mercy Facebook page, supported the nonprofit’s assertion that the funding would follow a careful review process.

“This is not the kind of project someone does overnight,” she wrote. “The cemetery has been holding meetings with other grant organizations so that we best know how to proceed and truly maximize your humbling and generous offer.”

Neal Price, a caretaker of the cemetery, told The Algemeiner that he and other officials had met in June to discuss costs and create the plan Celebrate Mercy had requested, but that he had not heard from Goodland or Tarek El-Messidi, Celebrate Mercy’s founder, in weeks.

New York State Assemblyman Dov Hikind, a Democrat from Brooklyn, accused Sarsour of “fraud” because Golden Hill had not received a disbursement.

“Sarsour is a fraud,” Hikind said in a statement following publication of the Algemeiner article. “She talks out of both sides of her mouth. One minute she’s claiming to be a disciple of the great Dr. Martin Luther King Jr., and the next she’s standing with a terrorist on stage at an event, and singing praises of that terrorist to an audience. I won’t be the least bit surprised to hear that her little Jewish cemetery publicity stunt wasn’t quite what she made it out to be.”

In April, Sarsour appeared at an event in Chicago with Rasmea Odeh, a Palestinian woman who is being forced to leave the United States for not telling immigration authorities that she was imprisoned in Israel for her role in two terror attacks. In May, Hikind objected when the City University of New York School of Public Health chose Sarsour to deliver the keynote speech at its graduation, saying Sarsour supports terrorism and radical Islam.

Sarsour hit back on Facebook, writing: “I have the unfortunate receipts of what it costs to be a target of the right wing, alt-right, right wing zionists. This has caused my family great emotional stress & trauma. It’s not free to keep my family safe. I just want people to know I am taking names of media outlets and prominent individuals who have used the last few months to defame my character. I may be quiet but they will pay with their pockets.”

Sarsour noted that El-Messidi had visited the Colorado cemetery in February and was awaiting plans from the cemetery officials.

“Once they had a plan to take on this huge project Tarek would be ready with the funds,” she wrote.

“You can call me what you want BUT DO NOT EVER QUESTION my integrity,” she also wrote, adding: “I am exhausted. I am tired of the lies, lies, and more lies. It’s too much and it reignites the most vitriolic human beings on this earth. I am not safe and someone will pay for this with their pockets. Big time.”