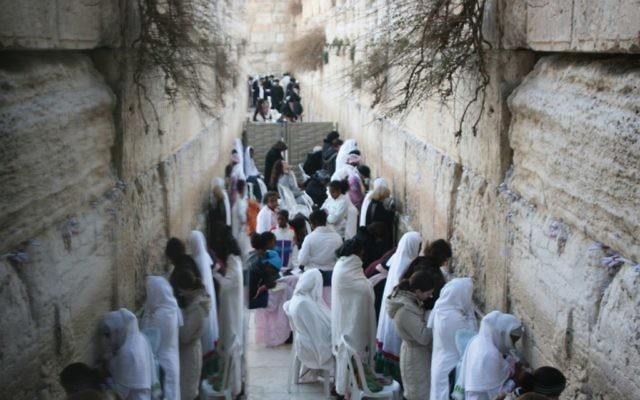 Away from the Western Wall controversies, a sense of awe. Talya Zisken

“And the light is good, what a delight for eyes to see the sun!”

The Kotel is open 24/7, 52 weeks a year, a controversial, inspiring and enigmatic place full of paradoxes. It is historical and religious, at once private and public — a physical space and a spiritual space. And it binds the generations.

Twenty-one years ago, my mother, Ellen Esther Kahn, may her memory be a blessing, and I meet daughter/granddaughter Talya at the Western Wall plaza, on her high school class’ return from Poland. The students’ Israeli flag is handed over to a bride and groom, magically present at 5 a.m. We join the community of netz/sunrise at the Kotel — some women near, almost one with the stones, some next to the mechitza in sync with a minyan. One woman answers “Amen” to another’s recited-aloud prayers. The light is soft, heartwarming, mysterious.

A homeless woman sleeps on the stone bench at the back of the plaza. Beggars congregate, pray and ask for charity. “Every beggar is perhaps the Messiah,” observed Israeli poet Zelda.

Early morning Rosh Hodesh — women praying, individually and in groups. At times, an awkward, almost-conversation between the daily ultra-Orthodox group, whose members have been coming to the Kotel since 1967, and the monthly Women of the Wall group, which has been gathering for over 25 years.

Prayer — different modes, manners, milieu, emphases, concerns, questions, politics, dissent — hopefully for the sake of Heaven. The many worshippers reach the Amidah (Standing Prayer) at the same time. Fragility, beauty, illumination, an opening in the silence.

Hearing the birds in the silence.

Doves, swallows, sparrows and common swifts, with 88 nesting sites in the Wall, swing around, swoop down, scream, on the wing. They become part of the prayer, connected to the community before they leave on their journey back to Africa. A little bird is stuck between the stones, together with the petakim — folded notes carrying dreams, demands, hopes, poems, tokens, tears, thanks. In a time of virtual instant messaging, mail is still placed in the world’s largest mailbox.

In the plaza, A., in charge of maintenance of the Wall area, puzzles aloud as to how to extricate the little bird. The recommendation of an Israeli ornithologist elicits the comment: “Look at life — God’s ways — I am standing exactly in this spot and someone walks by with the information I need.”

My father, Herbert Naftali Kahn, may his memory be a blessing, comes straight from the New York-Tel Aviv flight to the Kotel, before doing anything else. Before reuniting with the beloved Jerusalem grandchildren, he recites the 15 Shir Hama’alot/ Song of Ascents (Psalms 120-134), sees the Levites singing on the steps of the Temple. “May the Lord bless you from Zion and may you see the good of Jerusalem all the days of your life.”

Psalms echoing over the generations. The world over, secular and religious, Jews and non-Jews, consoled and inspired by their words. The Psalms’ “clear minimalist language in direct contrast to our daily life. … May we be precise in our speech … remember to be discerning … and know that words are never just words,” Israeli President Reuven Rivlin said several months ago in announcing the “929” study project on Psalms. (Reading the 929 chapters of the Tanach with new eyes: one chapter a day, every day, in sequence).

Kabbalists and soldiers, babies and the elderly, presidents, celebrities, pilgrims and poets, and a great mix of people from different countries and cultures come. Mexican-Jewish girls, soon returning to Mexico, weep; an older Christian pilgrim crawls on bleeding knees to the sacred space; selfies are photographed with the Wall landscape. Tourists from Seoul and Brooklyn, Johannesburg and Bombay pray, arms swaying.

Remembering to give thanks for the divine promise, the divine gift, the miracles of daily life, the miracle of the building of Israel, rebuilding of Jerusalem. Touching the Wall, kissing the Wall — some stones smoother, “more kissed than others,” a woman suggests — unending prayer of the soul. Praying in Yerushalayim — yira/re’iya/shalem/shalom — awe, vision, wholeness, peace.

Longing for the presence of God, searching for clarity, beyond the constraints, beyond the conflicts, beyond the Kotel, walking, wandering, dreaming, moving from pain into healing, praising, asking, thanking without words/aloud and then, sometimes leaping into…

Sisu et Yerushalayim, gilu ba kol ohaveha. (Rejoice with Jerusalem, be glad for her, all who love her.)

And all who are beginning to love her.

Felice Miryam Kahn Zisken is a poet, translator and editor who made aliyah from New York to Jerusalem in 1971.