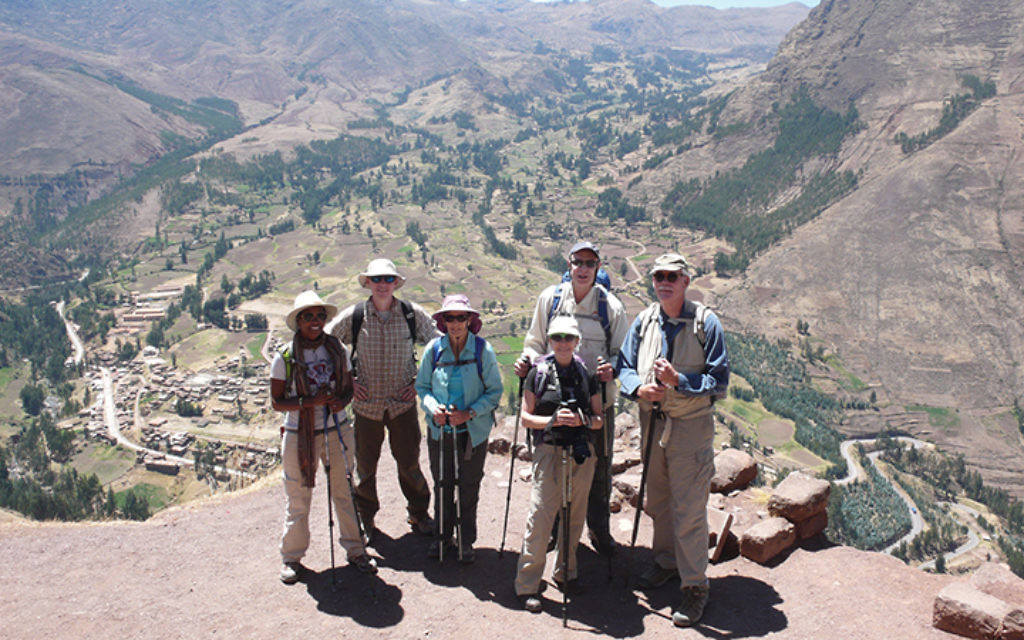 Since the early 1990s, Jerry Polizzi of Cleveland has biked through Provence and along the Danube, attended tennis camp in Georgia, sung with choruses in Maine and Québec, hiked across Sicily, visited the ballet and opera in New York City, and canoed through the Florida swamps.

He has done all this and more through experiential, immersive trips organized by Road Scholar, a Boston-based, nonprofit educational travel outfit that caters to adult “lifelong learners” like Polizzi, a retired government research analyst. The 78-year-old Manhattan native is one of a growing number of seniors eager to combine their free time and wanderlust with newfound knowledge, especially in the company of fellow philomaths.

They’re in luck: In addition to traditional senior tours, today’s lifelong learners will find myriad opportunities to suit every intellectual bent and itinerary, from Israel missions to cruises down the Mekong. Later this year, Polizzi plans to survey Revolutionary War history in Saratoga Springs, then head to Tuscany for cooking classes – his 26th and 27th trips with Road Scholar, according to his own estimate.

“It’s a chance to get off the beaten track and see places you wouldn’t ordinarily see,” said Polizzi of the so-called “experiential” travel offered by outfits like Road Scholar. “For example, in Sicily, a professor of volcanology led us up Mt. Etna. He knows the history, culture, flora and fauna of the area. He also knows about the Mafia. You don’t get that on other trips.”

Road Scholar is the indisputable giant of the movement, with 5,500 scholar-enhanced trips this year to 150 countries and all 50 states. At any given time, there are 2,000 Road Scholars cruising down the Ganges or the Mississippi, hiking through the Kalahari or the Grand Canyon, digging up ruins in Israel, immersing in French language in Provence, or taking the grandchildren on a wildlife safari in the Yucatan.

Road Scholar is especially popular among Jewish travelers, “perhaps because we have a heavy focus on education,” said Senior Vice President JoAnn Bell. For Israel travelers looking for something different, the non-profit organization offers novel ways to experience the Holy Land: There are tours devoted to hiking, birding, archaeology, history and culture, and language immersion in Jerusalem.

Founded in the mid-1970s as Elderhostel, Road Scholar essentially pioneered senior educational travel – but these days, age is less of an emphasis, said Bell. “Our travelers used to range from 60 to 80 with an average of 72. Now they range from 50 to 90, and the average is still 72,” said Bell. That average may skew lower with the addition of popular “intergenerational” excursions, in which grandparents and grandchildren explore specially designed itineraries together – “a great bonding experience,” Bell noted.

Road Scholars like Polizzi keep returning because the programs are varied, offer a relative bargain – averaging $1,000 domestically and $4,000 for international trips, about half the rates of many commercial trips – and incorporate the kinds of scholars rare on traditional tours.

Many of those scholars are also signing on for university alumni travel, a popular option for those nostalgic for the quad. Listening to that Classics lecture while strolling through the Acropolis is really the ultimate field trip – and in most cases, it’s not limited to graduates.

It’s also not limited to seniors, although those with the time and money to spend an average of $4,000-8000 per person cruising the Adriatic or trekking Antarctica with the Columbia University Alumni Travel Study Program are typically in the 55-80 age range, according to Mike Gilbert, president of Travel Study Services, the firm contracted by Columbia to operate alumni trips. “These are designed to be informative, and to do it in a comfortable way,” Gilbert explained of the tours’ appeal.

The one-to-two-week, “mostly inclusive” excursions often feature Columbia professors; about a third of Columbia’s offerings are land-based, with another third small-ship ocean cruises – which often combine a few dozen Columbians with alumni and professors from five or 10 other schools, Gilbert said.

Cuba is the hottest current destination for many programs, with Iberia and Iceland not far behind and Antarctica riding a tide of interest. Gilbert noted that alumni tours are especially popular for less-accessible but intriguing destinations like Southeast Asia and Cuba, which can be complicated to organize independently.

Apart from comfort, for the intellectually curious, well-curated alumni journeys have a lot of advantages. “You travel in a small group with well-educated people for the camaraderie of it – the unique and elevated conversations that are going to happen at the bar or around the dinner table every night,” said Gilbert. (Not to mention the spontaneous round of “Roar Lions Roar” on the Yangtze.)

If alumni travel is a field trip, a travel seminar in Israel, Spain or Prague with the Florence Melton School of Adult Jewish Learning is more like grad school field work: fun and exciting, but also intensely cerebral and wholly immersive. Shoppers and those inclined to linger by the pool should look elsewhere — but for the seriously studious, Melton offers an experience its participants describe as life-changing.

Melton, a project of the Hebrew University of Jerusalem, is most famous for its two-year adult Jewish learning curriculum. But the school brings the same intellectual rigor and team of world-class thinkers to its week-and-a-half-long excursions through Israel, Spain, and Central Europe. Melton CEO Judy Mars Kupchan explained that participants delve into Jewish texts and historical ideas — but they do it while walking the land and meeting Israelis and Diaspora locals, “not sitting in a classroom,” she said. Prices start around $3,000.

Mingling with locals is the emphasis on travel missions organized for donors of
UJA-Federation of New York – except those locals just happen to be “the most important and influential leaders of the Jewish communities,” from prime ministers to chief rabbis, said Mark Medin, UJA-Federation’s Executive Vice President of Financial Resource Development. So while Melton travelers focus on historical texts, Federation travelers sign on to hear first-hand from residents about the contemporary challenges facing Jewish communities from Argentina to Ukraine.

The Federation hosts 25 to 40 travel missions each year, to Israel and anywhere else it sponsors initiatives; about half the trip is devoted to sight-seeing, so Venice travelers still get their gondola ride and plenty of gelato. But since they’re intended as opportunities for donors (most are over 55) to explore Federation projects first-hand, the trips “provide unique, behind-the-scenes access” to people and places that casual travelers never see, Medin noted.

Non-donors will get their chance to peek next year, when UJA-Federation celebrates its 100th anniversary with a massive, centennial Israel mission to coincide with Yom Ha’atzmaut, Israel’s joyous Independence Day. All are welcome, and more than 400 are expected to show up; with such a diverse group, travelers will choose an educational “track” to suit their passion, with program focuses ranging from Arts & Culture to Technology and Geopolitics.