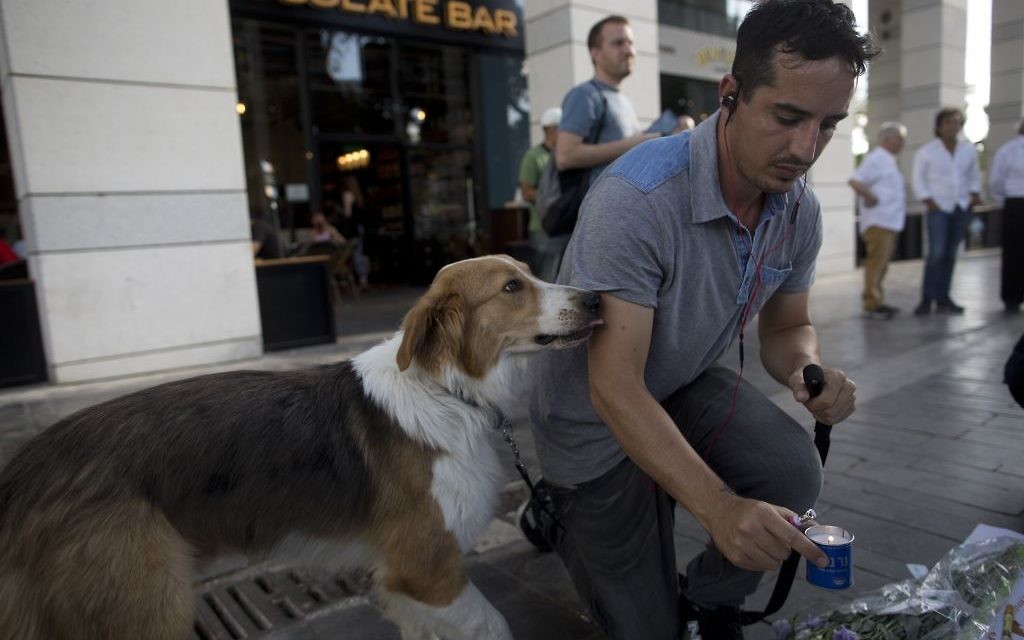 Tel Aviv — The day after two Palestinian cousins shot up a restaurant at Tel Aviv’s Sarona Market, killing four Israelis in the worst terrorist attack in an eight-month wave of violence, the plaza outside the upscale mall was teeming with politicians, curiosity seekers, police special forces and wait staff still slightly stunned from the news of the attack.

“I didn’t think there would be anyone here today. … Of course it’s scary. It’s nerve racking,” said Liora Zaydo, a pastry chef who works at the morning shift at the mall, but knew co-workers who were on duty at the time the shots rang out. “You’re much more suspicious. You’re looking a lot more over your shoulder.”

Not far from a makeshift memorial of candles at the site of the shooting, which was carried out by two suit-wearing gunmen from the West Bank village of Yatta, a group of Israeli 20-somethings donned stickers reading “Tel Aviv is taking a breath” and quietly sang from the Sabbath eve liturgy “Lover of my soul, merciful God.”

At a separate table alongside the Max Brenner restaurant where the shooting occurred and where Knesset members had ordered up meals in solidarity, Chabad Rabbi Joseph Gerlitzky offered passersby an opportunity to wear phylacteries. “When you put on tefillin, it puts fear into the enemies of Israel,” he said, citing a passage in the Talmud. “We believe the government is going in the wrong direction: every time they talk about territorial concessions and land for peace [deals] only makes the violence worse.”

Indeed, hanging over the Sarona Market aftermath and the rest of the country in the aftermath of the shooting was the question whether Israel’s new government and its new defense minister, Avigdor Lieberman, would take the country in a new direction.

At the height of a wave of stabbing attacks in the West Bank and Israeli cities last year, Lieberman, at the time a member of the parliamentary opposition, called on the Israeli government to respond with an “iron fist” — suggesting that assailants be killed on the spot among other get-tough measures such as stripping residency from some Palestinians involved in attacks.

“He should live up to his words before he came into office,” said Gerlitzky.

But even though Tel Aviv attack marked the first opportunity for Lieberman to put some of his hardline remarks into action, security experts said they saw little that was new in Israel’s response: a closure on the Palestinian village where the terrorists were from; a cancellation of permits to work in Israel for relatives of the assailants, and a revocation travel permits for tens of thousands of Palestinians for the holy month of Ramadan.

Despite the collective punishment, Israeli analysts said that Lieberman’s response doesn’t mark a departure from how Israel has been handling the eight months of unrest and suggested that he’s seeking to prove his credentials as a responsible and moderate leader now that he’s in office.

“There’s no escalation — it’s the same policies that [former Defense Minister Moshe] Yaalon has been following since the start of the knife intifada, even though this is the incident with the largest number of casualties,” said Gerald Steinberg, a political science professor at Bar-Ilan University.

“Overall, Lieberman tried to reinforce the image he’s tried to project since the appointment: that of a cool and rational Lieberman rather than a bellicose Lieberman.”

Indeed, on entering office, the new defense minister reiterated his commitment to a two-state solution, stressed the unity of the Israeli people over the unity of the “land” and stressed the importance of avoiding “wars of choice” — statements that many saw as an effort to calm Israeli and international fears about war mongering statements he’s made in the past.

Those initial comments, and now the government’s reaction to the bombing, bolstered expectations that the responsibility of serving in such a sensitive role would have a mollifying effect on Lieberman. “Coming in, he made a huge effort to look moderate, mainstream and middle of the road,” said Ehud Eiran, a political science professor at Haifa University.

“The question is whether this represents a real transformation to a more moderate Lieberman, on the road to a bid for leadership, or whether this is his opening move to calm things down, then afterward he’ll tack closer to the rhetoric he aired before entering the government, which is more aggressive.”

Although Lieberman reportedly inquired during a security cabinet meeting about the possibility of demolishing the homes of the terrorists within 24 hours, it was rejected by the attorney general as legally impossible.

Amir Tibon, a diplomatic correspondent for the website Walla!, said that for the time being, Lieberman is expected to defer to the opinions and recommendations of the Shin Bet and the military regarding the Palestinians.

“He sees [the defense ministry] as a possible springboard for the prime minister’s office, so I think he’ll be very cautious,” Tibon said. “The question is what happens if there are more and more attacks and there’s more pressure on him and he looks like he’s losing political support. One attack isn’t going to tell us.”

In the hours after the attack there were already political arrows on Twitter implicitly aimed at Lieberman. Bezalel Smotrich, a lawmaker from the pro-settlement Jewish Home party, tweeted, “I’m concerned that the terrorists left the scene alive yesterday.”

Lieberman is the first Israeli defense minister to hail from a Jewish settlement in the West Bank and now oversees the military, which has functioned as the legal sovereign in the area since 1967.

Natan Sachs, an analyst at the Brookings Institute, wrote in an email that although Lieberman’s short-term response to the Tel Aviv attack has indeed been measured, it’s the defense minister’s tendency for “reflexive hawkishness” on daily decisions in the Palestinian territories that could trigger an escalation. He added that in the event of major confrontation, Lieberman may feel “compelled” to live up to previous aggressive comments like advocating conquering the Gaza Strip in 2014.

With tensions eased in central Tel Aviv after a three-day weekend for the Shavuot holiday, restaurateurs in the vicinity of the attack were hoping that that inevitable initial drop in business would correct itself within days.

Yoav Alon, a partner in an eatery blocks away from Sarona, recalled how he advised diners to remain inside the restaurant after passersby reported hearing gunshots. With people outside running back and forth and emergency vehicles flooding the road, guests continued with their dinners even as they knew something was seriously amiss nearby.

“We didn’t want to create a situation of panic,” he said. “It was bizarre. We understood something had happened but we didn’t know what.”

Though guests came by on Thursday to express solidarity, the overall business impact has been negative.

“Unfortunately, we are familiar with these things. People aren’t in the mood to go out. The effect is that for a couple of days you really feel it,” he said. “Going out to a restaurant is fun — it’s an escape. Once you see things [like the shooting] it hurts the experience.”