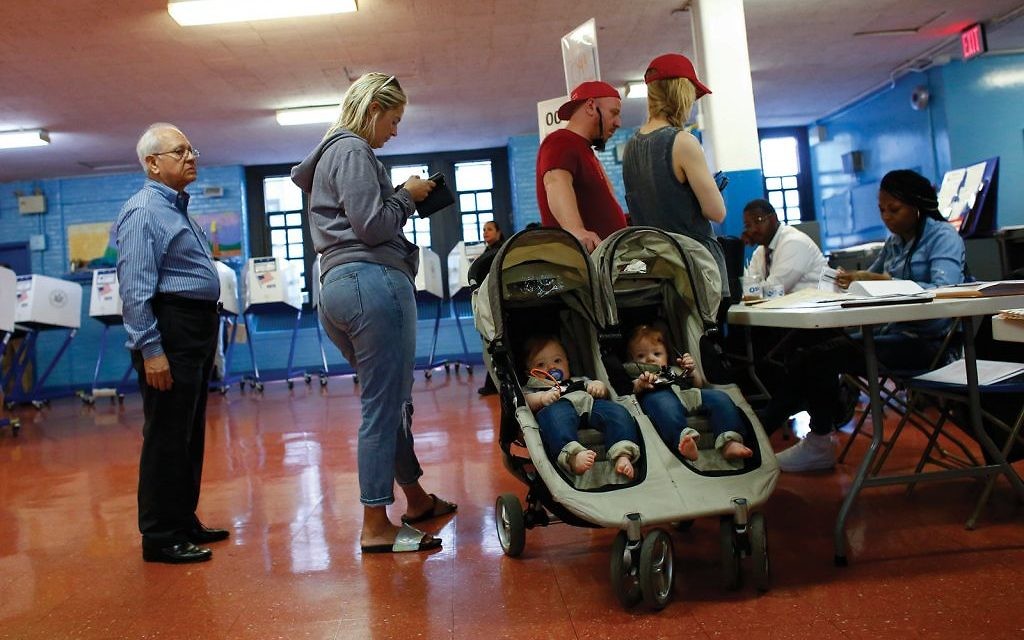 On the day of the Democratic Primary, on Seventh Avenue in progressive Park Slope, Rita Knox was standing with Hillary.

Leaving polling site at P.S. 321, just four blocks away from the Park Slope Food Coop — the scene of heated discussions on buying Israeli products — the retired real estate broker said she's been standing with the former secretary of state, in fact, since she first ran for senator, in 2001.

"She’s got a remarkable intellect," Knox said of former New York Sen. Hillary Clinton. "She was for healthcare reform and women’s equality way before that became fashionable. She showed exceptional negotiating skills as secretary of state, and her work ethic is comparable to none."

She also likes Clinton's stance on gun control and admires her involvement in the global health initiative.

"Her thinking goes way beyond the national into the international," Knox said."I think in the field of possible candidates she just rises way above them. I don’t think anyone can get close to her.

Up on the Upper West Side, Muriel, 89, was feeling the Bern. The retired anthropologist, who declined to give her last name, said she likes Vermont Sen. Bernie Sanders' platform, especially his focus on economic inequality.

“Bernie generally says things that I am in agreement with, like who has the upper hand and that it is unjust that they do. Hillary Clinton does not seem to me to be sufficiently critical of the powers that be.”

As New Yorkers went to the polls Tuesday for the first primary election in decades in which New Yorker’s votes could determine who wins, liberal bastions like Park Slope and the Upper West Side were being closely watched in the wake of the fireworks over Israel during last week’s Democratic debate in Brooklyn.

While young progressives from all demographic groups are flocking to Sanders, older liberal Jews tend to be more divided. The latest poll, conducted April 10-13, shows that Clinton holds a 2-to-1 lead over Sanders among Jewish Democrats, 65 percent to 32 percent, according to NBC 4 New York/WSJ/Marist.

Of the dozen and a half Jewish voters interviewed across both neighborhoods, all of them supported Sanders on the issues — including his controversial, evenhanded stance on Israel.

The divide on Israel between the candidates sharpened dramatically over the past two weeks due to statements Sanders made, first in a Daily News editorial board interview and then again at last week’s debate: that Israel should pull out of “illegal” settlements in the West Bank; that Israel used “disproportionate” force in Gaza in 2014; that the U.S. has to be “evenhanded” in its dealings with the two parties; and that in order to make peace “we are going to have to treat the Palestinian people with respect and dignity.” He also raised hackles — and concerns — when he mistakenly told the Daily News that 10,000 Palestinians were killed in Gaza rather than 2,100 (10,000 Palestinians were injured, not killed).

“I think Hillary is by far the most qualified. She’s been fighting for a long time for progressive causes: universal healthcare, women’s rights, climate change, and she’s the most qualified to deal with international issues,” she said as she walked down Seventh Avenue carrying a large Hillary sign and assorted campaign literature.

Berman is a member of J Street, the dovish lobby group, and for the most part agrees with Sanders on Israel. But she thinks, on Israel, as on other issues, Hillary is “more realistic.”

“I feel the situation with Israel is so dire and she has much more of a chance of succeeding in bringing Israelis and Palestinians together,” she said.

Noting that she thinks Clinton has a better chance of winning than Sanders in November, she said she thinks, “it would be fabulous to have a woman in the White House.”

Bob Boorstyn, a retired professor of electrical engineering, said he voted for Clinton Tuesday because although he agrees with Sanders’ platforms, including on Israel, he doesn’t see his progressive platform as “achievable.”

“I’d love it if he could do all that he says he can do but he can’t,” he said. “And lately he’s being a little bit negative.”

A 34-year-old attorney, who declined to give his name, filled in the Sanders bubble. Yes — Israel played a role in his decision, but for the better. “I think I agree with him there. It’s a sticky situation. I appreciate that he’s not pandering to people who think that Israel is always right.”

Another voter said she cast her lot with Sanders because she needed to vote her “conscience.” Declining to give her name because she believes in the “secret ballot,” the 60-something special education teacher said she "prefers his positions on the issues" and sees Sanders as "more genuine in wanting to solve these issues" than Clinton.

Her father was a union organizer, she said Sanders’ focus on income inequality hits home.

"It's time for the country to move back in a progressive way, to look out for people who can't necessarily look out for themselves," she said.

On the Upper West Side, views were similar, though nearly all of the voters refused to give their last names.

Near the polling place on 76th Street between Columbus and Amsterdam, Ellen and her husband, a couple in their 70s, said they voted for Clinton “because she has the knowledge and experience and the ability to win.”

Mia, a 30-something voter said she chose Clinton also because of her experience.

“She is the most experienced candidate that we have ever had. I support all her policies. I also support Bernie Sanders but decided to vote for her because of her experience.”

Candace, who was in her 60s, fell into the “I love Bernie’s platform but it’s unachievable” group. “I love Bernie but he doesn’t have anything in place,” she said.

Karen Zimmerman, also in her 60s, said she voted for Clinton, “because I’m a woman and for many years we have wanted a woman who is able to be a president.”

“She seems to be extremely capable,” she added of Clinton. “Bernie sounds like a wonderful man and I think that a lot of ideas that he has are very important, and I hope Hillary will accommodate them in some way.”

Ziva, a 54-year-old teacher, calls herself “an enthusiastic and reluctant Bernie voter.”

“I am a Hillary supporter, although I really appreciate Bernie Sanders pushing things to the left, to break up the banks and to have a carbon tax. I love that he has energized the base,” she said.

She said she feels “good” about Clinton, and completely “detach[es] her from her husband.” But Sanders, she said, he’s “brave.”

“He is turning things on their head. … I think that’s pretty exciting. If not now, when? I am happy to support the revolution.”

Jackie, in her early 70s, said she’s supporting Sanders because, “First of all I trust him. Here is Hillary Clinton in a nutshell: she was in Harlem recently and WNYC reported that she had criticized Bush. Later that same day on Staten Island, she found something to praise Bush about.

"Deceitful, that’s Hillary Clinton in a nutshell. I would rather vote for someone like Bernie who has high ideals and might get some small part of what he would like to do than vote for someone who has no ideals whatsoever.”

Although the Upper West Side and Park Slope are bastions of liberal Jewry, liberal Jews in other neighborhoods also spent the run-up to the primary weighing their decisions.

In Otha, a hip coffee shop in Williamsburg, two 30-somethings, one Jewish, one not, talked politics.

“Hillary might be upholding the status quo, but at least we know she won't go messing the status quo up. I mean, aren't you concerned about what Bernie said about Israel?” the non-Jew of the pair asked.

“That's why I'm voting for him,” his friend replied. “It's about time that somebody took a real stand” about Israel, he said. Hillary, he said, is unlikely to make any principled changes in the U.S.'s Middle East policies, but Bernie, he said, "just might."

Over in Midwood, Brooklyn, near the bustling Orthodox shopping strip near Avenue J, a 61-year-old former speech pathologist, who asked that her name not be used, said she was so torn about whom to vote for that she didn’t decide until “the second I put the pen down [on the ballot].”

“I was going to vote for Sanders,” she said. “I really, really liked Sanders.” But when pen hit paper she went with Clinton, because she wanted “to be on the safe side,” regarding Israel.

The twist is that she agrees with Sanders on Israel. She voted against him because she was afraid his support of Palestinian demands goes further than what he spelled out.

“Everything Bernie says sounds OK, but at the same time, people around me said he was using code words,” she said, to signal a deeper support for the Palestinians.

Still, standing near the polling site a few minutes after voting, she said she was already regretting her choice. “This was my chance to do something bold,” she said.

Even liberal Jews who couldn’t yet vote were on the fence.

Evan, 7 ½ and on his way to Hebrew school, is more than a decade away from voting. But still, he was torn. “I like Bernie. My parents probably voted for Hillary. Hillary is going to win. If Hillary wins it will be a first woman. But it will also be a first if Bernie wins. The first Jew,” he said.

Note, April 20, 5 p.m.: A previous version of the story incorrectly stated who Rita Knox supports. She is a longtime supporter of Hillary Clinton.