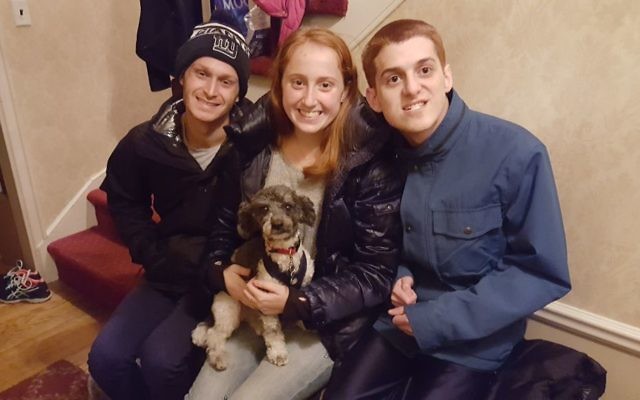 The author's children with their dog Ollie. Courtesy of Nina Moglinik

My son Noah is not going to college. He just isn’t capable of doing academic work. So I guess we dodged a bullet, of sorts, in not having to run him through the dreaded college admissions process.

But Noah has two siblings, an older brother and a younger sister. Both of them went through that process, though each from very different positions—one of great strength (based on the typical markers of applicant standing)–the other from a position of relative weakness.

Our approach as parents, however, was consistent. Nothing about the miserable process of applying to college was a referendum on their worth as human beings. That had been settled long before. We told them to expect rejection, since it’s built into the process. And we reminded them that this was their chance, their turn. Their father and I had gone to college and grad school, so this was about them, not us.

We didn’t hire anyone to coach our kids, even the child who struggled in school. I think of those folks frankly, as some version of vultures, preying on the insecurity—hysteria, even—of a certain group of parents who seem to think that the most important thing about parenting is where their kids go to college. Which brings me back to Noah, our son who was never going to go to college.

Noah is autistic. His IQ is in the mentally retarded range. His path in life was never going to flow through a campus quad, anywhere. But in some very important ways, his path in life is exactly like his college-going siblings. How? Well, Noah was raised with the same emphasis on character, responsibility and service that we worked dog-hard to instill in our other kids.   He has more of a work ethic—and more of a work resume—than the vast majority of young people his age, including college graduates.

It is both painful and amusing to read all the commentary about the college admissions cheating scandal. Much of it skips over the most essential thing, in my humble opinion: parenting should never be about prizes and bragging rights. It should be about cultivating the character of impressionable human beings so that when they go out into the world, you as a parent can be proud of who they are, not of where they go to school, where they work, how much they earn, or how networked they are.

Having raised our kids in a community full of striving, helicoptering parents, I got to see for more years than I care to count the idiocy of parental competition on behalf of kids, and the distorted and misplaced priorities that led some parents to emphasize everything but the character of their kids. As I told my own kids, if you are a dishonest, cheating narcissist and you go to Harvard, guess what? That’s still who you are.

Though it was often uncomfortable and isolating, it was ultimately liberating to have such different kids in a community full of so much conformity. I had no interest in following the herd off the loony cliff of college craziness. I chose instead to look at each of my kids and to think—with them—about what might be a good, appropriate environment for them. I wanted them to have a chance to thrive, to spread their wings, to make friends, to learn new things. I couldn’t care less about the status of the school, because I wasn’t going to put a bumper sticker on our car. And I told my kids repeatedly that it’s not about where you go, it’s about what you do with the experience, with the opportunity.

And for Noah, our child who was not college-bound, the same standards held true. What is good for him? In what kind of environment might he shine? Where might he have a chance to learn new things, perhaps to make a friend?

The latest college admissions scandal is about the thing that I think is most corrosive in our society: a failure of values, and a distorting and dangerous emphasis on the superficial, the status-oriented. I get why some parents focus on that: it’s much harder to raise kids of good character than to paper over every bump in a child’s life and to focus on collecting trophies and awards.

Teaching and modeling for your kids how to be the best version of a human being they can be is painstaking, nonstop, essential work. And it’s hard, sometimes excruciatingly so. But the payoff, if you succeed, is incalculable. We cheat our kids in the most profound way when we fail to do the crucial work of parenting. Even Noah could tell you that, in his own inimical way…