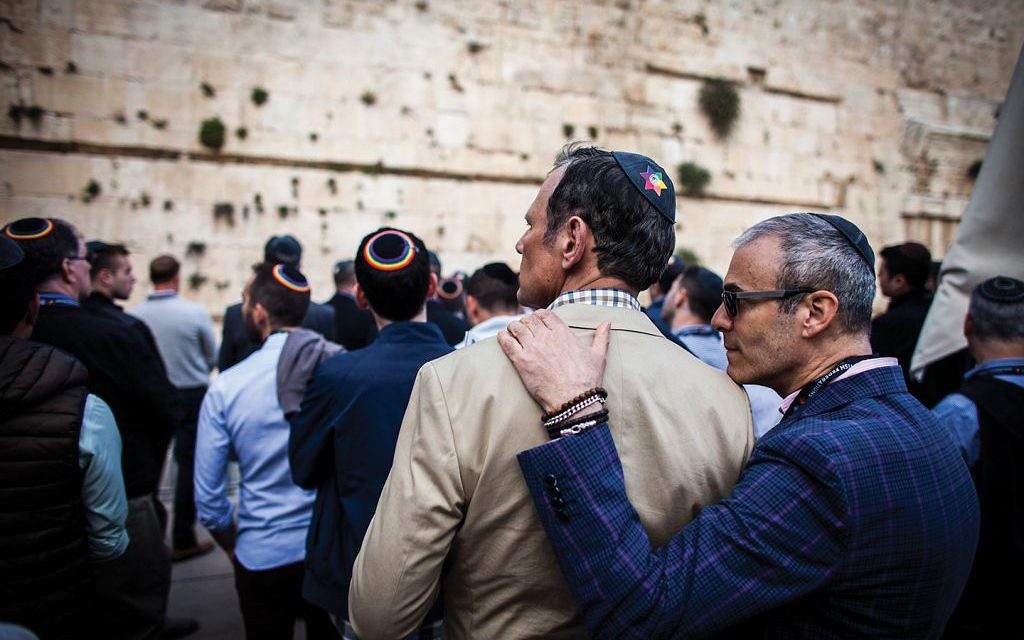 Jerusalem — Yad Vashem, Israel’s national Holocaust memorial and museum, is a mandatory stop for every mission organized by the Jewish Federations of North America, but Nazi persecution of the Jews, not persecution of gays and lesbians, is the central focus of the center.

Yet this week — Tel Aviv Pride Week — at least three of the museum’s tours, two of them for members of JFNA’s second and largest LGBT mission, delved deeply into LGBT persecution.

During a tour of Yad Vashem in Jerusalem on Sunday, the mission’s 100 participants learned about the Nazis’ demonization of the Jews and the liquidation of Jewish ghettos, for example, but also that the Nazis sent nearly 50,000 gay men to regular prisons and up to 15,000 to concentration camps, where some were forced to undergo medical experimentation. They learned, too, that gay men (lesbians much less so) were persecuted not so much to keep the German race “pure” but to keep the race going. The Nazis assumed gay men did not have children.

Unlike the many other tour groups in the museum, the mission spent significant time exploring a small exhibit on Anna Trauman, who, in 1942, sent a letter to Stephanie, her lesbian partner, before taking her own life.

In that letter Trauman told Stephanie, “I am becoming drowsy and my pulse is fading away. I am happily falling into a slumber. My life, a beautiful one, is coming to an end. I feel no bitterness.”

Although the letter does not explicitly reveal the women’s relationship, Roi Hanani, the guide, said that when archivists read some of Trauman’s previous letters to Stephanie, “it was very obvious they were romantic partners.” The museum subsequently retranslated the letter’s text, replacing “Dear” to “Beloved.”

The Yad Vashem tour, tailor-made for the LGBT mission, was part of an ambitious itinerary that combined sightseeing, social justice and meetings with Israeli counterparts. Participants were invited to dine with Dan Shapiro, the U.S. ambassador to Israel, and to meet President Reuven Rivlin at the President’s Residence.

The mission comes at a time when Israeli activists are pushing harder than ever for the right to marry in a civic ceremony, as well as other civil rights. The Chief Rabbinate, which has sole authority over marriage, does not recognize LGBT marriages or marriage between people of two different faiths. Members of these communities who wish to marry must do so abroad.

Early in the trip, participants met with recipients of Jewish federation grants made through JFNA’s Israel Religious Expression Platform (iRep). The platform offers funds to local Israeli groups committed to encouraging Israelis to consider alternative options for marrying outside the auspicious of the Chief Rabbinate.

Last Thursday, the group joined a Jerusalem memorial ceremony for Shira Banki, the Israeli teen murdered by a charedi Jew during the 2015 Jerusalem Gay Pride Parade.

Last Friday, they met couples, both straight and LGBT, who cannot marry in Israel due to the Rabbinate’s monopoly on marriage and the lack of civil marriage in Israel.

During a visit to Robinson’s Arch for Friday night prayers, many of the participants wore rainbow-striped kipot.

On Friday, the mission is slated to take part in Tel Aviv’s massive Pride Parade and related festivities.

William Kreisberg, a D.C.-based political consultant and federation board member, said the mission’s goal was to “engage” LGBT Jews who until now may have felt marginalized by the organized Jewish community.

Jonathan Ringel, an interior designer from Manhattan, experienced Israel as a gay teenager, when homosexuality in Israel was illegal.

“I felt forced to be closeted and my intention was never to come back,” Ringel said. Yet when he heard about the mission, “I was excited. My partner had never been to Israel and the fact that the federation, which I’ve always considered very heterosexual and conservative, organized such a mission told me there is more tolerance and change for the better, both in Israel and the States.”

Andrew Jimenez, a non-Jewish attorney from Ft. Lauderdale who accompanied his Jewish partner, Peter Rosen, on the mission, said he had expected “sentiments of hostility within Israeli culture” during this trip, his first visit to the Middle East.

“Instead, what I’ve encountered is incredible enlightenment and acceptance from everyone we’ve met. I’m well aware this isn’t reflected in every part of Israeli society, but at least LGBT culture is part of the cultural conversation,” he said.

Jimenez said he felt moved to take part in the memorial for Banki, especially because her murder was widely reported in American LGBT media.

“Being able to come here to Jerusalem and see that the community is resolved to grow from this event is very moving, and it’s something I’ve never seen back in my own country, where discrimination and hate crimes are common.”

Jimenez said the mission’s participants brought up LGBT rights in their meetings with everyone from NGOs to entrepreneurs.

“We brought up the fact that LGBT people are always going to be in the workforce and standing next to them in the military. We asked them questions like ‘How would you respond if employees told you they are LGBT?’ It’s something as a community we are instinctively passionate about. The reception has been overwhelmingly positive.”

Meredith Leeson, a bisexual lawyer and CPA from Washington, D.C., called the mission, which provided the ability to see Israel through an LGBT lens, “a once-in-a-lifetime” experience.

“This is our community. It enabled us to make connections and to look at everything through the eyes of the LGBT community, even when we were at Yad Vashem. Our discussions were impactful,” she said.

For Leeson, meeting Israeli LGBT activists as well as straight interfaith couples, among others, who are unable to marry in Israel “was really enlightening.”

She was especially pleased to hear an Orthodox rabbi discuss marriage laws as part of a panel discussion. “He was willing to speak to us and share his views. And he answered our questions.”

Tom Canning, spokesperson for the Jerusalem Open House, an organization that focuses on community building, services and social change for the LGBT community, said the mission’s visit to JOH gave the city’s often-struggling community strength.

“It’s important that people know how important the Jewish community in America, and especially New York, has been to the LGBT community here in Israel. American olim were very involved in our center’s creation, and also financially since then. “For us, a visit like this is very strengthening.”

Canning informed the American delegation that Tel Aviv’s openness and tolerance doesn’t extend to other parts of Israel.

“I spoke to them about our work with unique communities: LGBT charedim, LGBT Palestinians served within our center. We spoke about the Jerusalem Pride march, which is still considered very controversial and which doesn’t receive widespread support from the municipality or society. I spoke about the impact of [Banki’s] murder on our community, and the work we’re doing to bridge tears created with the religious community.”

(JOH runs an education program and encounters with rabbis.)

Canning said he urged the mission participants “to get involved with Jerusalem Pride, to get their communities engaged.”

Kreisberg, co-chair of the D.C. delegation on the mission, said mission participants are eager for such involvement.

“We’re a broad tent and getting broader,” he said.