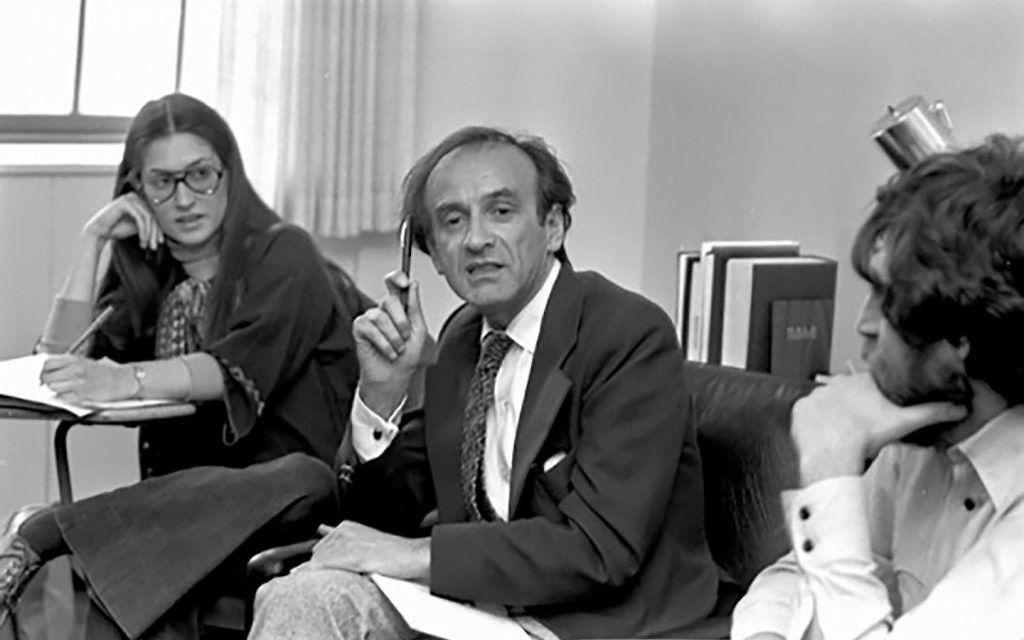 Elie Wiesel leading a seminar at Boston University in the late-’70s. BU.edu

Someone has got to do the worrying, so I suppose I will take up my share without delay.

Elie Wiesel has rejoined his parents and sisters in the world of truth. What does that leave our world?

Professor Wiesel’s classes at Boston University were always titled “Literature of Memory.” Then there was a subtitle that indicated the actual content of the class: Rabbi Nachman and Kafka; Job; Literature of Friendship; Writers on Writing; Suicide and Literature; Jewish Women’s Voices. The point was that in literature was to be found the wellsprings of memory, and in memory, as Professor Wiesel taught us in the name of the Baal Shem Tov, is to be found the secret of redemption.

With the rest of his time, he strove to teach these lessons to the rest of the world, the remainder of humanity who did not make the cut into the 50 students in his seminar. He spoke at the United Nations, in the Bundestag, at the 100 other universities that granted him an honorary degree, on television, in synagogues and community centers. When given the opportunity, he addressed the King of Sweden and the Nobel Prize committee, and from that platform, the entire world.

His message of memory, engagement as against indifference, solidarity with victims, and common sense self-preservation against the most destructive tendencies in the human soul fill bookshelves. He tried all the media I can think of. He wrote books, he wrote plays, he wrote editorials. He spoke on the radio, he spoke at the 92nd Street Y, he spoke before national legislatures and he spoke to broadcast journalists. He wrote addresses and lectures, he wrote poems, he wrote a cantata, for goodness sake. He wrote in English, he wrote in French, he wrote in Yiddish, he wrote in Hungarian, he wrote in Hebrew. And his writings were translated into dozens of languages to be read worldwide. He prayed. He even sang.

And somehow, inexplicably, the world remains silent, to borrow a phrase. Thankfully, there was not another Holocaust in Europe with gas chambers and trains and Jewish victims. But there was rhetoric from the Arab world promising to eradicate the Jewish state from the face of the earth. And far more genocides and attempted genocides and ethnic cleansings and assassinations and wars and abductions and disappearances. And worst of all, more indifference to suffering and to persecution and fanaticism and to violence.

How has this happened? When one powerful person puts in such an effort; when he exhorts and inspires so many to do so much against the more violent and intolerant angels of our nature — how can it be that the world is not more peaceful and tolerant and humane?

And that took place on his watch. Elie Wiesel walked among us, a living witness to what indifference can permit. Now he no longer does, and we are faced with the inevitable question of what will happen when there are no more Holocaust survivors living among us? Who will have the moral gravitas to speak out, to sound the alarm against indifference, suffering, persecution, inhumanity wherever it needs to be sounded: in the White House, in the UN, in the halls of power?

I’m worried that Elie Wiesel’s passing will be noted on social media, on the news, and on the covers of a few magazines. And then next week, it won’t be noted at all. That his testimony will be shelved among a host of witnesses to injustice and inhumanity, and slowly or quickly fade from public consciousness. That the day will come when the shame we feel in countenancing a world that had both Elie Wiesel in it and at the same time contained victimization, fanaticism and inhumanity will fade. That we will no longer feel that shame.

What shall we do?

A few years ago at a synagogue in Dallas, someone did exactly what Professor Wiesel asked us to do at the conclusion of each semester’s seminar. This person saw me from across the synagogue, and came over and said hello, and said: “Remember that we studied together in Elie Wiesel’s class? Remember the books we read together, and the discussions we had?” And we renewed our friendship.

Why should this call be limited only to those fortunate few students who registered for Professor Wiesel’s university courses? Why can’t anyone who read his books or heard him speak become a student of his?

In that sense we were all students, so we can all be teachers. Let us gather a group of friends, or a few friends, or even one friend to meet regularly, to read and to discuss, and to deepen the bonds of humanity that unite us.

Let us strengthen our ability to hear the cry of the victim, even when it may conflict with our own self-interest. Let us not forget, let us not rest, let us not be indifferent, until the world is as it could be. We may never in our lifetimes be satisfied with the situation, but that is of little consequence. We will take the satisfaction that we did not stand idly by the blood of our brother, and as Elie Wiesel proved from the story of Cain and Abel, “whomever kills, kills his brother.”

What piece of rabbinic wisdom could be more appropriate to the life of Elie Wiesel, or to those of us who live One Generation After him than the words from Pirkei Avot, The Ethics of the Fathers: “You are obligated to complete the work, but neither are you free to desist from it.”

Rabbi Joseph Kanofsky is the rabbi of Kehillat Shaarei Torah in Toronto. He received his Ph.D. in literature from Boston University under the direction of Elie Wiesel and was a Wexner Fellow at the Rabbinical College of America.