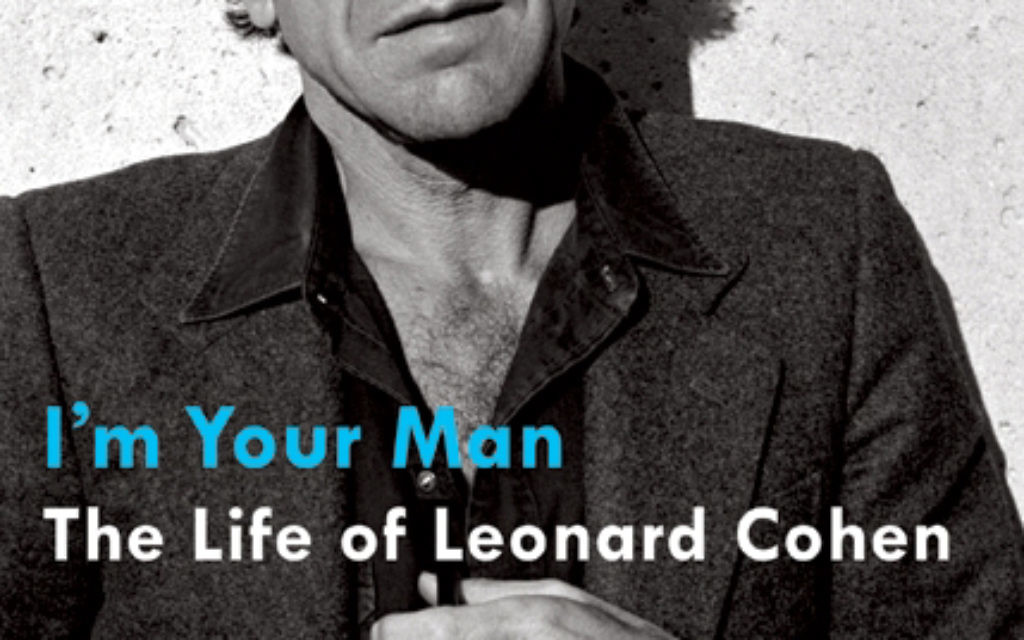 With the Days of Awe upon us, the sense of fear and trembling is almost palpable in the verses of the prayer U’Netana Tokef: “Who by fire, who by sword, who by beast.” Leonard Cohen’s whimsical take on these questions could come as light relief.

But then song aptly titled “Who by Fire,” is shadowed by the troubling question: “Who may I say is calling?” According to Sylvie Simmons, author of “I’m Your Man: The Life of Leonard Cohen” (Ecco Press), this light-footed approach to the unanswerable, placing loss and redemption on the same line, serves as modern-day liturgy.

In this up-to-the-minute account of the life of one of the most beloved, influential singer-songwriters of our times, Simmons has chosen to introduce her subject by his most endearing trait: as the man in the suit. “Darling, I was born in a suit,” Cohen tells the author. It’s no surprise that his father, who died a young man, owned a men’s haberdashery.

Told in exhaustive detail, relying largely on long dialogues with the poet himself, “I’m Your Man” adheres neatly to a chronological order. It’s difficult at first to make the connection between a popular, well-adjusted young man — a camp counselor and leader of McGill University’s debate team — with the solitary artist whose 1966 novel “Beautiful Losers” brilliantly captured the fault line between enlightenment and mental breakdown.

Fitting verse or lyrical excerpts into key points of the narrative, the author maintains a clear focus on creative process, which dominates throughout the book, tracing the development of the poet’s literary and musical style, from the cafés of Montreal to Columbia University and, with literary grants in hand, to London, revolutionary Cuba and the Chelsea Hotel. Early on, Simmons risks invoking skepticism; from the endnotes it’s apparent that much of her material comes from interviews conducted with Cohen himself or people very close to him, raising the concern that she has been too protective. On the other hand, the author’s choice to shun hyperbole works well; the moment that altered Cohen’s course in life trajectory, it seems, was when he picked up a volume of poetry by Lorca. While this climactic episode lacks the drama one would expect, it illustrates how Cohen’s newfound attraction to words and language led him to carry a notebook everywhere he went, and soon he was rarely without his small guitar. These and other characteristics are used as props to portray him squarely as a workmanlike figure. His work habits — small hotel rooms with the beloved essentials of a bed and desk, and lyrics taking years to perfect — are featured no less colorfully than the love affairs he gracefully pursued.

An artist needs his muses, and these included a Norwegian beauty, Marianne Ihlen, whom he met on the Greek island of Hydra, and a quiet Canadian woman named Suzanne Verdal, who indeed served tea and oranges in her rundown apartment by the St. Lawrence River. The song “Suzanne,” the result of a love too delicate and pure for the rages of romance or intimacy, achieved startling success in the repertoires of folksingers Judy Collins and Joni Mitchell, and while Cohen’s early performances were shaky, the enthusiastic response he received nudged him ever closer to a contract from Columbia Records’ John Hammond.

Cohen’s apprehension that the thread between inspiration and diffusion could be perverted or broken is intelligently addressed in this book. As a longtime rock journalist, Simmons, well acquainted with the particulars of the music business, provides engrossing details about each of Cohen’s albums, his relationships with producers and managers, and how, early in his career, without musical sophistication or business savvy, he risked losing control over his own works. Fate would shine a positive light over this dilemma: For his 1985 album, Various Positions, released independently due to lack of support from his own label, Cohen would compose what would become his most revered song, “Hallelujah,” eventually covered by younger artists such as Jeff Buckley and Justin Timberlake.

The fruits of success could be bitter, however. To ground himself during very fraught recording sessions or concert tours, Cohen often sought the company of a Japanese Zen master, Roshi. Ultimately, in the ’90s, he exchanged the rigors of the “music racket” for those of a Buddhist monastery on Mount Baldy in California.

However, as Simmons points out, this strict immersion in no way lessened Cohen’s Jewish faith, and in fact deepened his learning of the Torah and esoteric traditions. Emerging from his five-year stay in the monastery as an ordained Rinzai monk, Cohen discovered that a new generation of performers was busy performing his music in his stead. Toward the end of the biography, Simmons relates the triumphs that would await him, notably with 2003’s “We Came This Far for Beauty” tour, in which numerous singers such as Nick Cave and Rufus Wainwright took to the stage to celebrate his music. No fewer than 50 albums have been recorded by various artists in tribute to Cohen’s work, and he has received countless awards from the music and literary establishments, as well as from the governments of Spain and his native Canada.

Toward the end of the book, the play-by-play detail devoted to recent recordings and concert tours is unnecessarily exhaustive, and while readers may take pleasure in the ongoing accomplishments of a beloved artist who still dazzles well into his 70s, one senses that the biographer is clinging to him like Cojen’s famous blue raincoat.

However, throughout, the many anecdotes she has culled have been put to good use to portray Cohen, the man and the artist. Simmons’ allusions to poems and lyrics highlight a deep understanding not only of the process of his work but of its content, and the influence it has had. Quoting a conversation between the singer and Rabbi Mordechai Finley, Simmons brings to light the liturgical feel in some more recent works, namely “The Book of Mercy.” Cohen’s reaction naturally points to the tradition whereby great Jewish poems from ancient times have been woven into the most heartfelt pleas and supplications in Jewish prayer books. In “I’m Your Man,” we see not only the life of one man who was transformed by words, but how we ourselves may be transformed by them.

David Koral is a regular contributor to eastvillageradio.com and a former docent at the Lower East Side Tenement Museum.