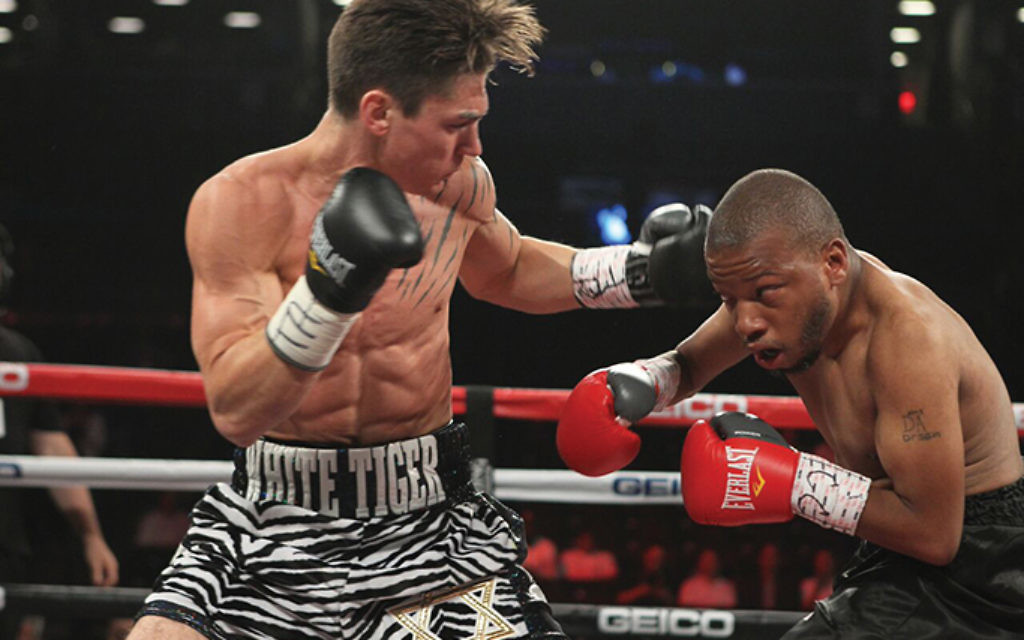 There have been dozens of Jewish boxers, but 26-year-old welterweight Dustin Fleischer from the Jersey Shore town of Monmouth Beach may be the first from a family of fighters — not all boxers but fighters. His grandfather Buzio was pumped full of Nazi bullets, left for dead in a horse barn, escaped, was captured and sent to a concentration camp, escaped, before killing several Nazis (who had been drinking) with their own guns, before escaping into the Polish woods and joining the resistance. In New York, Dustin’s father, Phil, joined the street-tough Jewish Defense League, rogue and rejected by what they sneeringly called “the polite Jews.” Most of the kids, Phil remembers, were the sons of Holocaust survivors. “Knowing what people went through,” said Phil, “if you had to defend [Jews] by picking up a bat, you did it. If pushed, we’re smart enough to do what we have to do.”

After the JDL, Phil took up boxing, had a pair of red boxing gloves tattooed on his arm. “I help train Dustin,” he says. “I probably worked his corner in about 70 [amateur] fights.” Dustin’s main trainer is Jamal Abdullah, who also trains “Prince” Charles Martin, a top-ranked heavyweight.

On a Saturday night in September, under the lights of an arena in Beach Haven, N.J., Phil worked Dustin’s corner, toweling his son’s face, as Dustin — a pair of red boxing gloves tattooed on his arm too, black tiger stripes tattooed over his biceps and left pecs, a Star of David on his tiger-striped trunks — won his fourth pro fight, his fourth knockout, against no losses. Dustin, nicknamed “the White Tiger,” pummeled his opponent into oblivion, two minutes and 43 seconds into the first round.

“It was probably one of the first times in Jewish boxing,” says Phil, “that a father and son worked a professional bout together. Hey, did I do a good job, Dustin?”

“Yeah,” says Dustin, “but you didn’t have to do much.” The father and son laughed. Dustin said the other fighter “maybe landed a jab on me.”

Last Saturday night in Quincy, Mass., Fleischer KO’d Oscar Diaz in the second round. After the fight, he said via Facebook, “We got a second-round KO! Not to toot my own horn but 5-0 [and five KOs is one helluva start to my career!] I’ve been hustling, fighting every month for the past four fights so I decided to take a week break after this one, but we look to fight again in December.”

In the autumn of 2014, Fleischer, with a sparkling amateur record of 112-18, seemed destined for a spot on the U.S. Olympics boxing team. But a bout with mononucleosis knocked him off. “We were ready to turn pro,” says Phil. “We were going to sign with one of the biggest promoters out there. They set us up for one fight before we’d sign a long-term deal. I looked at the date and said, ‘Wow!’ The fight was to be on Yom Kippur. Now, it’s one thing if you’re Sandy Koufax and you don’t pitch on Yom Kippur, but when you’re an amateur, basically a nobody, looking for your first pro paycheck?

Phil, a Reform Jew, remembers saying, “‘Dustin, they want you to fight on Yom Kippur.’ Dustin [who sometimes attends Chabad], said, ‘No way I’m fighting on Yom Kippur.’ I said, ‘I know, there’s no way.’ The promoter (he wouldn’t say who) told me, ‘Hey, we’ve got so many people coming to watch you.’ I said, ‘We’re Jewish. There’s no way he’s fighting on Yom Kippur.’ They seemed offended. I said, ‘Hey, if you don’t understand this, maybe you’re not right for us. We parted ways. Dustin was kind of depressed. I told Dustin. ‘Don’t worry. Things happen for reasons.’”

Then, Phil found out that Roc Nation, Jay Z’s entertainment company, which represented all-stars in other sports but had no fighters, hired David Itskowitch, who worked for HBO and Golden Boy, former boxing great Oscar de la Hoya’s company; the idea, he says, was to ignite a boxing promotion division for Roc Nation. “Everybody told me he was a real good dude,” says Phil. “I sent him Dustin’s resume: three-time Golden Glove champion; No. 2-ranked amateur in the United States; won the Olympic box-offs. I was asked, why we didn’t sign with the first promoter? I started stuttering the story, ‘Yom Kippur… Dustin’s Jewish.’ Itskowitch said, ‘I understand. I’m a landsman.’

“After seeing some tapes of Dustin,” says Phil, Itskowitch said, “We want to see you in action.” He arranged for Fleischer to get into the ring for a sparring session with Sadam Ali. Phil was taken aback. “Sadam Ali weighs 147; Dustin fights at 140. Salaam Ali is one of the top-rated welterweights in the world. So I said to Itskowitch, ‘You’re putting a kid who’s 10 pounds lighter into the ring with a guy who’s two fights away from a world title?’ Dustin told me, ‘Hey, no problem.’ After seeing Dustin go one round with Sadam Ali, David Itskowitch stood up and said, ‘I’m sold.’” Dustin now fights under the Roc Nation banner.

Though Fleischer’s entire career is only nine rounds old, fought against five opponents with a combined record of 2-12, hardly enough to get Fleischer ranked or considered a contender, his association with the Roc Nation promoters has inaugurated the kid’s career in style. At Fleischer’s first fight, earlier this year at the Theater at Madison Square Garden, reportedly among the 4,253 fans were Rihanna, Jay Z, C.C. Sabathia and Jake Gyllenhaal.

Fleischer tells us that he’d like to fight once a month, for a while, anyway. “I’m fighting four rounds, at this point, not 12 rounds, so there’s not the same wear and tear. Some people think, oh, you’re a professional athlete, you’re making major league money. Boxing’s really not like that, especially when you’re starting out. You have to keep fighting to build your record, [lift] my ratings, before eventually making real money.” He envisions a two-year run to contending.

When Dustin’s father had a difficult time with the family trucking business, Phil recalls Dustin taking time out from the ring, saying, “‘Dad, I’m going to come in and help you.’ When the business got on its feet again, he said, ‘Dad, I got you as far as I can; I have to go after my dream now.’ I said, ‘No problem, son. Thanks for helping me out. Now go after your dream.’”

“I started martial arts at age 5,” says Dustin, “and at 9, I got into boxing. My father took me to the gym with him. I watched him spar. I fell in love with it. I was very aggressive, very tenacious, even as a young kid, and in boxing you get rewarded for that. I was humble and confident at the same time. My nickname, ‘The White Tiger,’ comes from my martial arts background, from what’s called the ‘white tiger’ style of martial arts.”

“I like my nickname,” says Dustin. “It describes my style in the ring. The white tiger is unique, and no one else has my nickname. At first, I didn’t want to be labeled ‘white.’ I’m the grandchild of a Holocaust survivor, not a racist. So when Roc Nation first mentioned the name, I went ‘Whoa!’ But then I realized that anyone who knows me knows it’s not because I’m white but because of my martial arts background.”

Phil says, “Dustin mixes with everyone. He was taught by his grandfather, what counts is the character of a person. When my father came to America, one of his first friends was a black man. When they were in Florida, when my father’s friend was told to sit in the back of a bus, my father got into it with the bus driver.

“My father was different from other fathers. Somebody called him a dirty Jew, he cracked him. Another time, after a Jewish slur, my father just picked up a fire extinguisher and … my mother said to me, ‘You don’t know what your father’s been through.’ He looked at life a bit different.”

Grandfather Buzio, who died several years ago, “left me his Star of David necklace,” says Dustin. “I always wear that into the ring.”

The Fleischers are passionate Zionists, in the spirit of the old JDL. “Oh my God!” says Phil. “Oh my God! I can’t begin to tell you. But, hey, Dustin’s trainer is Muslim. Sometimes he lives in our house. One has nothing to do with the other. But, man, I couldn’t be more proud of that country; bless that country [Israel].”

Dustin says, “I want to go to Israel soon. I’ve never been. It’s something I feel I need to, and really want to do, in my life. I’ve been getting a lot of support from people in Israel, sending me messages” via Facebook, Instagram and Twitter (@TheWhiteTigerDustinFleischer; @dustinfleischer). One group gets together in their gym to watch me fight. They say I’m one of their favorite fighters now. They give me a great feeling. I want to see my homeland, to see that gym, too, and work with the kids.”

He looks at life a bit differently.