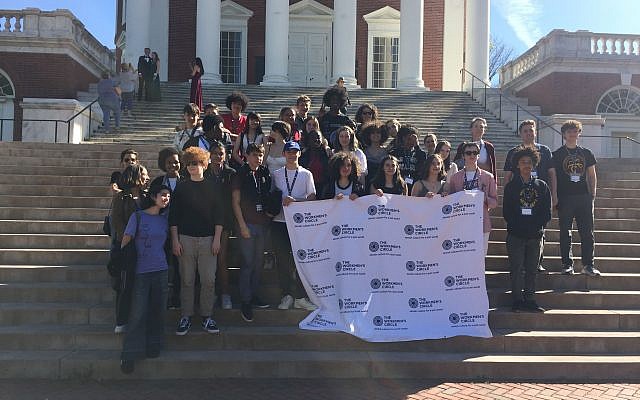 Middle and high school students during a Civil Rights trip hosted by The Workmen’s Circle. Photo courtesy of Jonah Massey

With a group of middle and high school students from the Workmen’s Circle, I traveled south from my home in Jackson Heights to come face to face with the history and current developments of white supremacy in America. My connection to the Workmen’s Circle, a secular Jewish organization dedicated to fighting for social justice, allowed myself and other kids the opportunity to visit historical grounds and meet with individuals, which expanded our understanding of the civil rights movement. My journey with the Workmen’s Circle forced me to face a complicated American legacy and think about what my generation has to do with it.

Our trip was an immersive experience; we had the opportunity to meet with activists, who actually made a difference in our country’s struggle for civil rights. We went to Moton High School—now a museum—in Farmville, Virginia, where we were lucky enough to speak to people who once were high school students in the area. The group we spoke with had either protested school segregation in 1951 or had experienced the consequences of the Prince Edward County school shut down between 1959 to 1964. Hearing how the protests of high school students influenced the Supreme Court cases that built up to Brown v. Board of Education inspires me to continue my own activism as a student in 2019. Learning about Moton High School in a classroom environment should be enhanced through listening to the people who were part of the history itself.

Studying about history is also relevant to current events. We visited Charlottesville, Virginia, where neo-Nazis and white supremacists held a Unite the Right rally not too long ago. It was also the site of numerous Confederate statues, testaments to how symbols of slavery are not only things of the past but things of the present as well. To hear that neo-Nazis chanted slogans like “Jews will not replace us” on the University of Virginia’s campus was an uncomfortable, terrifying reminder that a more progressive world has not erased white supremacy.

This past junior year, I was fortunate enough to have taken the American Studies course at my school, where two of my teachers coupled the curriculums of AP English Language and AP U.S. History into a critical and frankly, an enlightening class. Towards the beginning of the year, we read sections of Thomas Jefferson’s Notes on the State of Virginia, and I soon concluded that Jefferson was not a virtuous man. In his book, he reveals and elaborates on his unwavering support of white supremacy. He believed that Virginia and its strong foundation in white supremacy created a model for a utopian American society. The fact that Jefferson (along with other slave-owning white men) wrote the Declaration of Independence did make me falter in my resolute criticism and contempt. As the class advanced, and through debates with my classmates, I am now of the opinion that Jefferson contributed to the democratic systems of America and freedom in the modern world, but also contributed to America’s traumatic and harrowing history of slavery and oppression.

On the Workmen’s Circle journey, we also visited Monticello. I visited Monticello for the first time when I was in the 6th grade on a trip with my family. From that visit, I vaguely remember standing in front of the two towering trees at Monticello’s entrance, while my brother climbed amongst their branches. Otherwise, I only recall the fact that Monticello was a verdant and pleasant place. However, after my second visit to Monticello, I can clearly remember the handprints of enslaved children in its bricks. I can remember the painfully beautiful fields of Jefferson’s estate. I can and will remember that he enslaved over 600 African-Americans throughout his life, 175 of which he owned as he wrote the Declaration of Independence. I refuse to ignore Jefferson’s contributions to freedom because his hypocrisy reveals the greater hypocrisy of America’s foundation in slavery. My renewed visit to Monticello and my American Studies class exposed me to this oxymoron of unequal freedom, something necessary for future American introspection. Not American self-hatred or self-defense, but American acceptance and acknowledgment of the abhorrent aspects of history through learning and experience.

So where does this American legacy leave the 25 or so teens from the Workmen’s Circle who grappled with it? Not in a single, concrete place. It leaves us in a position to push forward and achieve what our forefathers did not accomplish. It requires us to try through trial and error to attain a more equitable and just society. The Workmen’s Circle is a way to begin this process. Our goal is to create un shenere un besere velt—a more beautiful and better world. And through the Workmen’s Circle, along with others my age and younger, I have already started to push forward—at the end of this journey we landed in Washington, D.C., lobbying for an array of acts that targeted problems like difficulties in voter registration and attaining immigrant driver licenses. But my first step, along with learning in an academic setting, was journeying to where history happened itself. I can now learn and work from there.

Jonah Massey is a rising senior at the Bronx High School of Science in New York City.