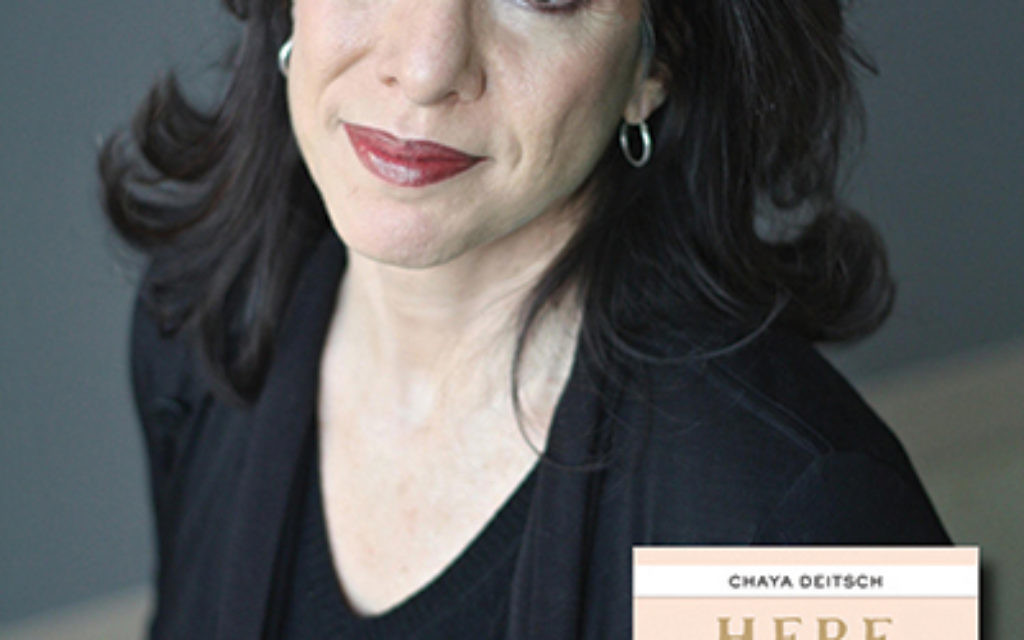 For years, hers was a cautionary tale.

“This is what could happen if you go to college or wait too long to get married,” said Chaya Deitsch, author of the latest ex-chasidic memoir, “Here and There: Leaving Hasidim, Keeping My Family” (Schocken), mimicking her detractors. A former member of Chabad Lubavitch, Deitsch, single and 52, described skipping weddings for years to avoid the pitying stares and whispers.

But unlike fellow authors in the fast-growing literary genre — including Judy Brown, Shulem Deen and Leah Lax — Deitsch never fully separated from insular world of her childhood. Today, close family ties keep her connected to a tradition she would otherwise have completely left behind.

“I wanted to talk about what it’s like to leave internally but still stay connected,” she told The Jewish Week, while sitting in a quaint coffee shop overlooking Bryant Park. Today, as a marketing professional for a financial firm, she makes wardrobe choices — a sleek blouse and blazer — that hold no hint of a chasidic past spent in thick knee-high socks, long skirts and tops pinned to cover the collarbone.

Deitsch left the community in her 20s after attending Barnard College (itself a rarity for a Lubavitch girl), where a world of art, literature and a diverse peer group left her craving an “unconfined identity.” She gradually shed the trappings of a chasidic life, and today, aside from the occasional piece of matzah on Passover, is uninvolved with ritual Judaism.

Still, in her new, aptly titled memoir, Deitsch describes the struggle to hold onto both worlds, even as her ties to the chasidic community fade. A deep nostalgia, and support from her immediate and extended family, keeps her close to the fold.

“Throughout this journey, my family has been so accepting,” she said, described how one aunt, upon reading her memoir, encouraged her to “write another one.”

“They felt the book was honest, and I was so careful to keep it a personal story,” said Deitsch, whose last name marks her as a member of one of the most affluent and well-respected Lubavitch families. A sprawling boys yeshiva campus on Eastern Parkway bears the family name, after a contribution by her grandfather, a successful businessman and close student of the late Lubavitcher Rebbe, Rabbi Menachem Mendel Schneerson.

Despite the familial accord, Deitsch stressed that the memoir was intended to be critical. “If everything had been hunky-dory, I wouldn’t have left,” she said. The secondary status of women in the Lubavitch community, which she witnessed time and again while growing up in New Haven, Conn., was the primary reason she left tradition behind, she said.

“I had enough of a healthy ego not to want to be stuck behind a curtain,” said Deitsch, referring to the mechitza in her childhood synagogue. One of five daughters, she described her Shabbat experience growing up, as one of the women scrambling to cook, set-up and clear while the men sat, ate and sang.

“It was horrifying that we would never really participate,” she said. “Even then, I had a deep sense of nihilism — life is short, and this didn’t seem fair.”

Today, Deitsch, who calls herself a feminist, still worries that her decision not to marry affects the way others perceive her story.

“It still sits there as part of the equation,” she said, reflecting on the larger issue of a society that is still unsure about “what to do” with women in their 40s and 50s who chose not to marry or have children.

Still, after years of self-reflection, she appears stronger.