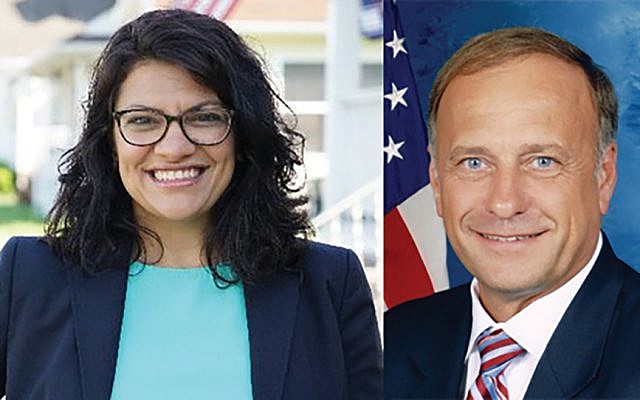 While a former Nazi and several Holocaust deniers went down to defeat in the midterm elections, the new Congress includes several members said to express anti-Semitism and others openly critical of Israel as a Jewish state.

Among those re-elected last week were Danny Davis (D-Ill.) and Andre Carson (D-Ind.), with ties to Nation of Islam leader Rev. Louis Farrakhan — who is widely condemned for engaging in Holocaust denial and anti-Semitism — and Rep. Steve King (R-Iowa), whom the Anti-Defamation League asked to be censured for his alleged anti-Semitic words and actions.

Among those elected for the first time was Ilhan Omar, a Democrat from Minnesota, who has declared Israel an “apartheid regime,” wants the U.S. to normalize relations with Iran, and in 2012 tweeted, “Israel has hypnotized the world, may Allah awaken the people and help them see the evil doings of Israel.” And Rashida Tlaib, a Democrat from Michigan who is the daughter of Palestinian immigrants and who supports cutting aid to Israel because it “doesn’t fit the values of our country.”

Among those defeated were a man who claimed 9/11 was the work of Israelis and Jews, a woman who invited a “messianic rabbi” to offer a prayer for the Pittsburgh synagogue victims, virulent anti-Semites, white supremacists and a woman who co-authored a book advancing anti-Semitic claims that Israel controls American foreign policy. 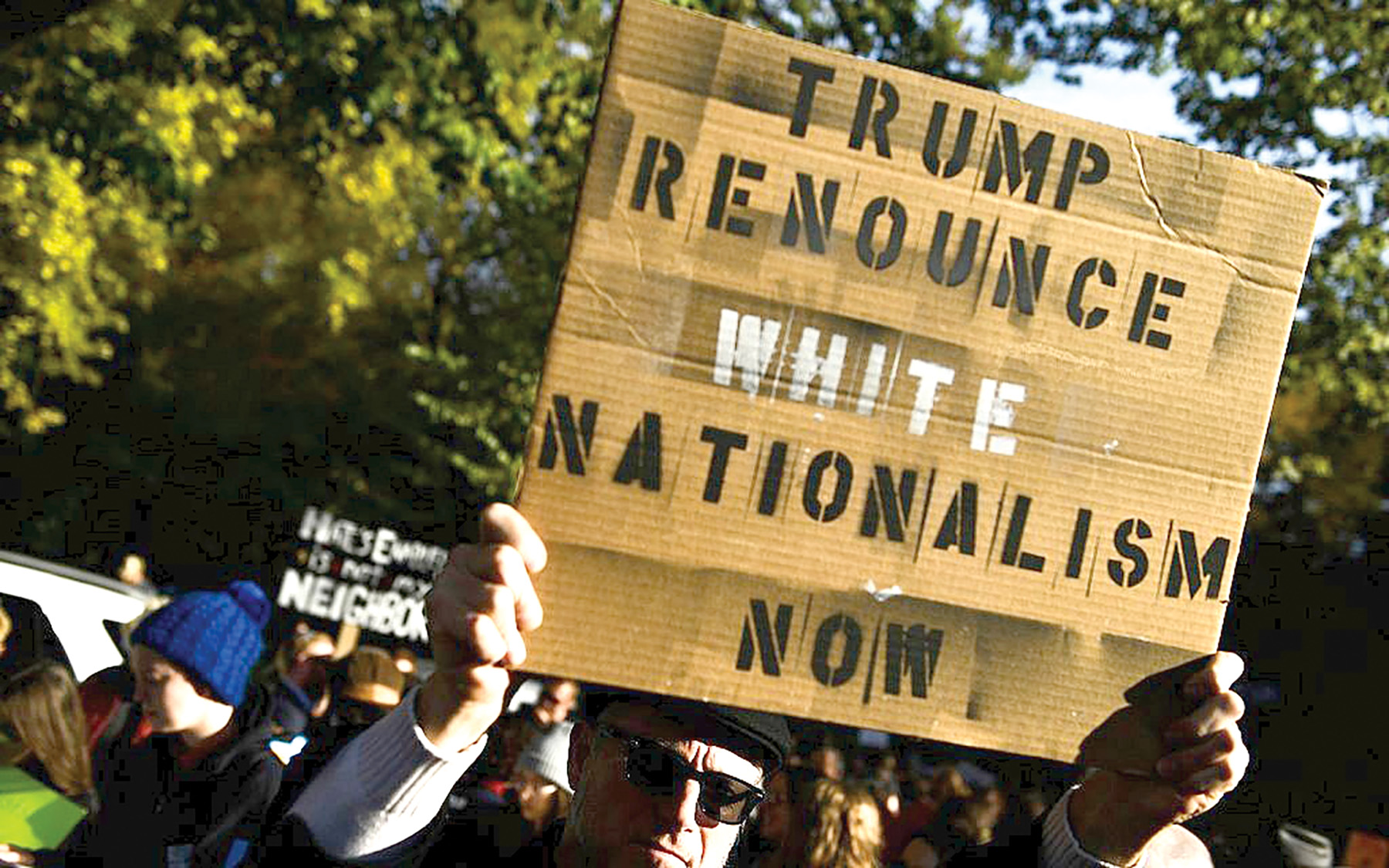 Protestors demonstrate against President Trump when he visited Pittsburgh after the Tree of Life massacre. In a new poll, 72 percent of Jews believe the president’s rhetoric and policies are “very” or “somewhat” responsible for inspiring the Tree of Life killer. Getty Images

“We’re seeing the mainstreaming of anti-Semitism,” observed Malcolm Hoenlein, executive vice chairman of the Conference of Presidents of Major American Jewish Organizations. But Jewish leaders said they must also learn to deal with the new political reality resulting from these midterm elections and cautioned that it would be wrong to totally dismiss members of Congress who hold different views on Israel. Tlaib, for example, supports a one-state solution, jeopardizing Israel’s status as a Jewish state.

Although saying that she completely disagrees with those who promote a one-state solution, Rabbi Jill Jacobs, executive director of T’ruah: The Rabbinic Call for Human Rights, said in an email that “holding such a position does not automatically make a person an anti-Semite.”

“As a Jewish community, we should be prepared to engage with these new members of Congress to encourage them to support the rights of Israelis and Palestinians and not dismiss them out of hand,” she said, adding that “we should similarly demand that those elected who support the extremist policies of the current Israeli government stop taking steps that bring us farther and farther from a peaceful solution.”

Hoenlein said American Jews, who generally hold the political middle ground, are today “losing the center in America to the extreme left and the extreme right. The country seems to be more polarizing, which is benefiting the extremes. We have to learn how to deal with [the new members of Congress] intelligently and not play up the many bad guys. We have to invite them — even some who expressed views that are troublesome but who know very little — and we have to do a real job to educate them and isolate those who harbor unacceptable views and attitudes.”

At the same time, Hoenlein noted, “we saw a tremendous outpouring [of support] in the wake of the Pittsburgh [synagogue] massacre.” He described the Pittsburgh tragedy as “the end of the age of innocence for American Jewry.”

A poll of American Jewish voters conducted on Election Day for J Street found that 72 percent of Jews believe that the comments and policies of President Trump were either “very” or “somewhat” responsible for inspiring the gunman who shot and killed 11 congregants during Shabbat services last month at the Tree of Life synagogue. Two other congregants and four responding police officers were also wounded by the gunman, who later surrendered.

Pollster Jim Gerstein of GBA Strategies, which conducted the poll, said the questions asked were designed to determine “whether the Democratic vote would be Democratic as usual or even more so in the age of Trump. … We had just had the worst attack on American Jews in history, and a president who had come to grieve” [with the Pittsburgh Jewish community] but they “rejected [him] because of what he had been doing.”

Gerstein said he was surprised at how high the number was of those who held the president responsible to some degree. He said the vote was “an extraordinary statement of how Jewish voters feel about this president and that they hear his dog whistles.”

Trump’s Jewish supporters have pushed back against the notion that the president’s rhetoric is directly responsible for the uptick in anti-Semitism since he took office in 2016; they have argued that the large number of hate crimes against Jews didn’t begin with Trump and that there are legitimate reasons to be skeptical of illegal immigration, believing the borders have to be secure.

Trump has insisted he is calling himself a “nationalist” because he “loves our country.” But he got pushback this week from French President Emmanuel Macron, who asserted: “Patriotism is the exact opposite of nationalism. Nationalism is a betrayal of patriotism. … In saying, ‘Our interests first, whatever happens to the others’ … you erase the most precious thing a nation can have … its moral values.”

Gerstein said his poll found that “Jewish voters disagree with him [Trump]. They think that right-wing extremism and racism and anti-Semitism is rising under this leadership. … Our findings showed that 76 percent voted for Democrats and that 19 percent voted for Republicans. That is a net increase of 16 points since 2016.”

Of all those elected to Congress last week, Rabbi Jacobs said she is “primarily concerned” about the re-election of Steve King, who “proudly associates with white nationalists.” In addition, she said she is concerned that “thousands of voters supported other Republican candidates who deny the Holocaust or who identify as Nazi sympathizers.” She said the Pittsburgh shootings prove that “can lead to deadly ends.”

The Anti-Defamation League found that “more than 1.8 million Americans voted for known extremists and bigots who were running for national offices. In races for the U.S. Senate and the U.S. House, extremists pulled in, on average, 29 percent of the vote.”

Corey Stewart, a Virginia Republican running for the Senate who openly spoke of his admiration for white supremacist Paul Nehlen, lost to incumbent Tim Kaine but still amassed 1.3 million votes — 41 percent of the vote.

Another big vote getter was Seth Grossman, a Republican who sought a House seat from New Jersey. The ADL said he “came within striking distance of winning, garnering 46.2 percent or 108,822 votes.”

“Grossman has praised racist opinion pieces that appeared on white supremacist websites, including American Renaissance and VDare,” the ADL noted. In addition, it said he has written on Facebook that faithful Muslims cannot be good Americans; Islam is a cancer; and gay men with HIV should have been quarantined in the 1980s.

Grossman’s candidacy was condemned by the National Republican Congressional Committee, which had asked him to drop out of the race.

“Despite their losses, [they] … were successful in another, critical sense,” the ADL said. “For the past several months, they enjoyed a very public platform for disseminating their vile ideologies to millions of potential voters. Moreover, the political atmosphere that allowed these candidates to compete also allowed others who are not on this list to rely on racist, anti-Semitic and bigoted arguments against their opponents.”

Asked if the number of extremist and bigoted candidates who ran in the general election this year was different from prior years, Jessica Reaves, senior writer at the ADL’s Center on Extremism, said people with “extremely problematic-to-racist views have run for office before, but the extent to which they feel comfortable expressing these views in public forums is extremely unusual. There has been a real shift in terms of political rhetoric and what is acceptable, and what people are willing to express in terms of the white supremacists we saw running.”

She said the shift was noticed for the first time in Charlottesville, where “these people were willing to stand up and express their vile points of view very publicly without masks on; they weren’t hiding who they are. …”

Reaves emphasized that both political parties “need to be extremely vocal and definitive in their condemnation of racist or bigoted or anti-Semitic language.”