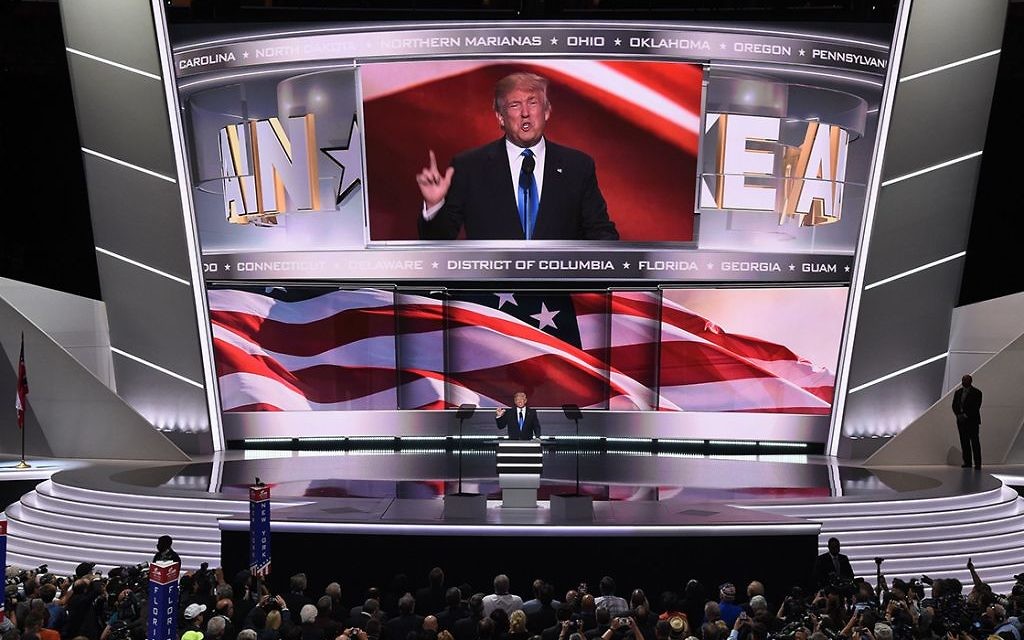 Cleveland — The “us” versus “them” campaign of Donald Trump moved into high gear here this week at the Republican National Convention as the party’s presidential nominee highlighted his pledge to be a law-and-order president.

In a rip-roaring speech, former New York City Mayor Rudolph Giuliani promised that Trump would “make America safe again” just as he had made the streets safe when he took office.

“I changed New York City from the crime capital to the safest large city in the U.S.,” Giuliani said. “What I did for New York, Donald Trump will do for America.”

But whether that message will resonate with Americans after a campaign in which Trump has alienated so many voters is debatable.

“It’s not an unreasonable play because people are worried,” said Larry Levy, executive dean of the National Center for Suburban Studies at Hofstra University, who was in Cleveland this week representing the center.

“They are making a bet that suburban swing voters, particularly women, are more concerned about the safety of their families and neighborhoods than they are about the social issues. Hofstra’s suburban poll shows that they have very different views than Republicans [on social issues].

Yet Levy added that he did not expect to see a change in the Jewish vote, about 70 percent of which reliably goes to the Democratic candidate.

“The Jewish vote has been pretty steady through presidential campaigns, and there is no reason it should change very much,” he said, adding that Jews generally have little impact because they are “relatively small” in number.

Although the Jewish vote would not be decisive in an election, should Trump carry Florida “the race becomes genuinely competitive,” said E.J. Dionne, a senior fellow at the Brookings Institution and a political commentator.

“If he doesn’t win [Florida], I can see him having a really tough time assembling an electoral-college majority.”

Dionne, following an American Jewish Committee conference on demographic change in which he participated, told The Jewish Week that Hillary Clinton, the presumptive Democratic presidential nominee, “has the capacity” of amassing “significantly” more than the 70 percent of the Jewish vote that Barack Obama received in 2008.

“Bill Clinton got 90 percent of the Jewish vote,” he said. “Hillary Clinton probably won’t get to where her husband was, but she could get a bump up over Obama’s numbers.”

Levy said that should Trump lose Florida, “he has virtually no margin for error in other states.”

But a Trump alternate delegate at the convention, Todd Shapiro of Manhattan, insisted at the New York delegation’s breakfast this week that young Jews today are not wedded to the Democratic Party like their parents and grandparents were.

“It’s an Internet generation, it’s political and people have different reactions towards things,” he said. “The Republican Party is becoming chic with Jews. There’s energy out there. Democrats don’t have the same edge. They expect Jews to be supporting them because it’s always been like that. But Republicans are bringing them in. I think Trump will get 30 percent of the Jewish vote, if not more. I think this will be a record turnout for the Republican Party by Jews.”

But another New York delegate, Nachmun Caller, the Republican district leader in Borough Park, lamented that Trump “hasn’t reached out to the Jewish community.”

He noted that before the New York primary in April, Ted Cruz came to Brooklyn to campaign “but no one presented Trump.”

Nevertheless, Caller said he believes Jews in Borough Park will vote for Trump as they voted for the Republican presidential candidates in 2008 and 2012.

“The leftist Democrats turn us off — they’ve destroyed our family,” he said, referring to Jews collectively. “I used to say, ‘We didn’t leave the Democrats, the Democrats left us.’”

Grover Norquist, president of Americans for Tax Reform and another speaker at the AJC event, said there have been “scores of demographic changes” that have taken place in the last 30 years that, if highlighted during the presidential campaign, could help Trump win because Clinton’s policies run counter to those changes.

He cited the fact that 14.2 million Americans now have gun carry permits and that Clinton wants to see changes in the structure of charter schools, the operation of car services such as Uber, the sale of e-cigarettes and the allocation of school vouchers.

“These demographics matter,” he insisted.

But at this point, the Trump campaign is taking a different approach. Its campaign chairman, Paul Manafort, reportedly told a breakfast gathering here that Trump is taking a page from Richard Nixon’s 1968 election playbook. It painted Nixon as a strong leader when Americans were concerned about chaos at home — including the assassinations of Martin Luther King Jr. and New York Sen. Robert F. Kennedy — and abroad.

Rep. Peter King of Seaford, L.I., who is a member of the House Homeland Security Committee and chair of the subcommittee on Counterterrorism and Intelligence, noted that in the 1960s and ’70s “a number of Jewish intellectuals left the Democratic Party for the Republican Party” over the issue of law and order.

“They felt you had to maintain security in the streets and I believe that Donald Trump will be able to show that his policies regarding supporting the police and speaking out against violence in the streets is stronger against Democrats,” he told The Jewish Week. “These are very sensitive issues — I’m not trying to exploit anything. But the reality is Hillary Clinton went to visit the mother of Michael Brown. … Michael Brown was the symbol of Black Lives Matter when it was lie after lie — hands up, don’t shoot — all of which was untrue.

“That’s where Black Lives Matter came from. To treat him as a civil rights hero, to visit his mother — why didn’t she visit the police officer in Ferguson, Missouri, Officer [Darren] Wilson, who did his job and had to leave his job because of all the national furor?

“It is the Democrats who are peddling this false narrative that police are targeting blacks, which all the statistics prove is untrue. … Cops are the ones who are saving black lives. They are the ones keeping all of us safe.”

King said also that a number of his Jewish friends tell him that they believe that the “Republican Party’s position — and Donald Trump’s in particular — is stronger on Israel than the Democratic position. Over the last seven or eight years, the Democratic Party led by President Obama has moved away from Israel. It is the most hostile relationship we have had with Israel since Suez in 1956.”

“Nevertheless, you don’t want to close the door on any opportunity, and a window that might be a little open now might become more open two months from now. So you have to be prepared.”