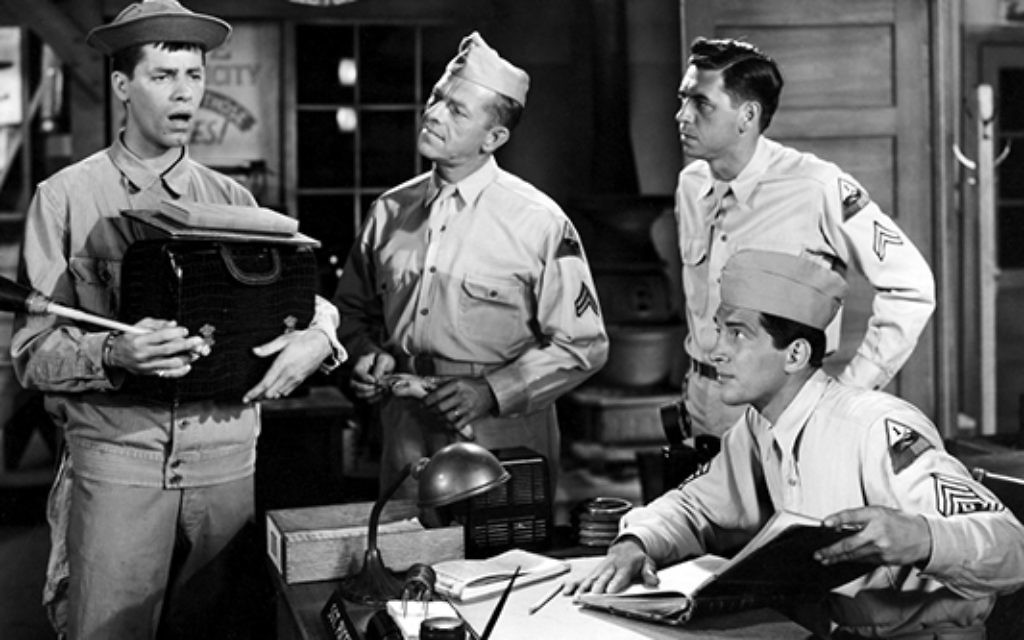 Through appreciation of both his comedy and humanitarian work, legendary Jewish entertainer Jerry Lewis is staying relevant at age 89.

The only comic to ever be nominated for a Nobel Peace Prize, Lewis added another award to his trophy case earlier this year, when he received the 2015 Distinguished Service Award from the National Association of Broadcasters (NAB). Gordon Smith, NAB’s president and CEO, said the organization was “honored to recognize not only [Lewis’] comedic innovation, but also his remarkable philanthropic efforts that have bettered the lives of thousands of children.”

Born Jerome Levitch in Newark, N.J., to Russian-Jewish parents, Lewis is best-known for his entertainment career — spanning comedy, acting, singing, film production, screenwriting, and film directing, all infused with his slapstick humor. But he has made arguably as significant of a mark in philanthropy, most notably as the longtime national chairman of the Muscular Dystrophy Association (MDA), where he raised more than $2 billion for MDA’s “Jerry’s Kids” initiative and hosted the organization’s annual Labor Day Telethon for more than 40 years.

“I think many people in later years associated him much more with the telethon than with his comedy. This work makes a perfect companion to his work as a comedian and shows that laughs by themselves are not enough in life,” Lawrence Epstein, author of the 2002 book “The Haunted Smile: The Story of Jewish Comedians in America,” told JNS.org.

On the comedic side, Lewis was originally paired up with Dean Martin in 1946, forming the famed team of Martin and Lewis. The duo grew popular through nightclub work, then starred in a successful series of comedy films for Paramount Pictures.

Prior to the recent NAB honor in the spring, Lewis’s accolades have included lifetime achievement awards from the American Comedy Awards, the Los Angeles Film Critics Association, and the Venice Film Festival. In 2005, Lewis received the Governors Award of the Academy of Television Arts & Sciences Board of Governors, and in 2009 the Academy of Motion Picture Arts & Sciences honored him with the Jean Hersholt Humanitarian Award.

Epstein said Lewis was a crucial element in the transformation of American culture after World War II.

“Lewis played a major, largely forgotten role in helping Americans recover after 16 years of the Great Depression and the war,” the author said. “Americans had forgotten how to let go, how to have fun. Lewis let them release their inner child. He was perpetually a 9-year-old caught in an adult world. By showing that 9-year-old, he taught audiences that had engaged in tremendous self-deprivation and sacrifice for so long how to start again, as a child would, to have fun.”

What exactly made Lewis so funny?

“His ability, very rare in the [American] culture at the time, was to silence his adult censor and seemingly behave in any way he wanted,” Epstein said. “The children in the audience were delighted because he was in essence giving them permission to do what they wanted and telling them that doing so was funny and good. He was like [Charlie] Chaplin in being very clever by using whatever props happened to be around him.”

Shawn Levy — the author of seven books, including the New York Times best-sellers “Rat Pack Confidential, Paul Newman: A Life” and “King of Comedy: The Life and Art of Jerry Lewis” — said religious observance hasn’t been a major priority for Lewis, but that his Jewish background still made a mark on both his comedic and humanitarian work.

“His grandmother sent him for Hebrew lessons so he could be bar mitzvahed, but he didn’t have a strong religious life,” Levy told JNS.org. “Philanthropy was part of the Jewish showbiz world, where he came of age. He was a professional entertainer from the time he left high school. Some of his comedy styles and showbiz idioms are very Jewish. ‘The Holy Fool,’ somewhere between ‘Fanny Brice’ and ‘Harpo Marx,’ the physical comedy and the characteristic of a man-child.”

Like many of his contemporaries, Lewis polished his entertainment skills in the resorts of New York’s Catskill Mountains.

“Lewis was a tummler (comic entertainer at a Jewish resort) at Brown’s Hotel,” Levy said. “So many comics of his generation — Danny Kaye, Sid Caesar, Mel Brooks, Woody Allen — all had that opportunity to break into show business by working at the Catskills hotels. Mainly it was a Jewish showbiz thing, so that’s a real strong part of his Jewish identity, that line of entertainment.”

Epstein sees another Jewish connection to Lewis and his work.

“It’s a stretch, but sometimes I see Lewis as a metaphor for Jews in the world, always an outsider, always needing to laugh,” he said.

Some of Lewis’s most popular films — encompassing his acting, directing, and writing — are “The Bellboy,” “The Ladies Man,” “The Errand Boy,” “The Patsy,” “The Family Jewels,” and “The Nutty Professor.”

“In the early 1960s, Lewis was the highest-paid film actor and he was given the most lucrative contract at that time for a television series,” Levy said. “This was just a few years after being the No. 1 nightclub act with Dean [Martin] and the No. 1 film, television, and radio act with Dean. There was a period of time, 1949-63, where he was at the top of the charts in multiple media.”

Levy said “The Nutty Professor” is regarded as Lewis’ masterpiece.

“It’s one of these occasions where an artist of strong gifts somehow gets out of his own self and transcends it. Jerry’s movies are filled with multiple identities and he plays multiple characters frequently,” said Levy. Decades later, in 1996, Eddie Murphy would play seven characters in the remake of “The Nutty Professor.”

Levy said Lewis’s entertainment career and humanitarian work combine to give him a unique multifaceted legacy.

“He has a real legacy as a filmmaker and a comedian that is genuinely deserved, and he gets overlooked sometimes, but he gets rediscovered,” said Levy. “The muscular dystrophy work that he’s done, the concept of the telethon… and even being able to talk about muscular dystrophy. I truly believe that if it wasn’t for Jerry Lewis, we would not be able to have that conversation.”