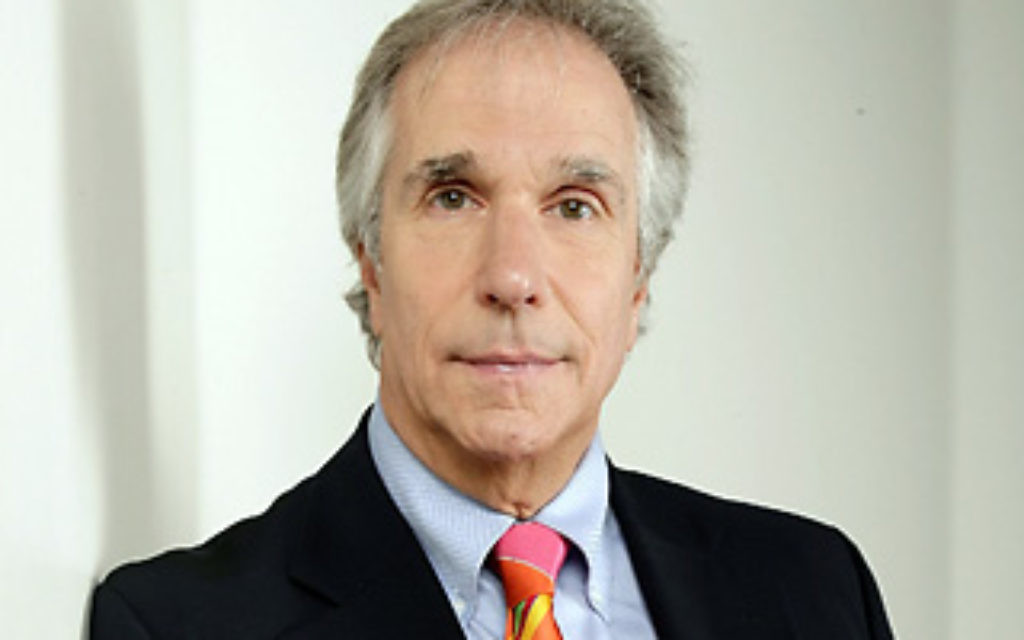 He tried out such stage names as Chester Flame and Peter Avalanche at Yale Drama School, but when he got the chance to star in TV and movies Henry Winkler stuck with the one his German refugee parents gave him.

“I am who I am,” says the pop-culture icon, who became one of the first Jewish superstars on network TV as the streetwise but sensitive greaser Arthur Fonzarelli on ABC’s “Happy Days”; the show ran 1974-‘84. He still acts on stage, TV and the big screen, but is also the co-author of 19 children’s books and author of a recent memoir — not bad for a kid who struggled with poor grades and low self-esteem as a result of undiagnosed dyslexia.

A Manhattan native, Winkler, 66, has three adult children with his wife of 33 years, Stacy, and will co-star in the upcoming comedy “Here Comes The Boom” with Kevin James and Salma Hayek. He also regularly appears on the Adult Swim comedy “Children’s Hospital” and has a recurring role on USA’s “Royal Pains.”

His memoir, “I’ve Never Met an Idiot on the River” (Insight Editions) is about overcoming challenges, his passion for fly-fishing and the personal growth and sense of accomplishment he gained from the sport after being coaxed into it by his lawyer. “My increased self-confidence has helped me to be a better actor, a better husband, a better dad and a better person,” he writes. The book is also a showcase of his outdoor photography. The Jewish Week recently caught up with Winkler by phone.

The Jewish Week: One of the first rules of publishing is: Give people what they want. You must have some amazing stories about your career and life behind the scenes at “Happy Days.” Why a book about fly-fishing?

Henry Winkler: My son asked me a few years ago, would I ever write an autobiography? This book is not just about inner peace, but about everything I have learned from fly-fishing over years that can apply to life. There are stories about the will to just take a chance, and I think that is very connected, for me, to fly fishing for trout.

Will you someday write that autobiography?

That’s a good question. I didn’t know I was going to write one book, let alone 19 novels, in my whole life. I always thought I was stupid and couldn’t write a book.

Do you enjoy writing?

I do. What I enjoy is going to the office with my writing partner Lynn Oliver and I think: Goodness, what are we going to write today, I don’t have the slightest idea, and by the time I leave I have six pages in my hand that never existed before. Every time it is a triumph and it’s shocking to me.

You had arguably the greatest role on television for 10 years. After it was over, it must have felt like leaving the presidency. How does what you do afterwards compare?

Everything compares differently, because it is oranges and apples. But it is true that when we finished doing the show, I sat in my office, I put my feet up on the desk and I literally had no idea what to do next. I was typecast. So a lot of roles weren’t coming.

Did you feel pressured to break out and do something completely different?

No, I felt a pressure to actually come up with something I wanted to do, to beat the fear that I had no idea [about what to do next]. I was just like a ship with no wind in its sails at the time. And finally, slowly but surely, the rest of my life started to take shape.

It seems like the character you played was almost the complete opposite of Henry Winkler. Does that make it easier to play?

It is easier to step outside of yourself completely. For me it is, absolutely.

Is there any similarity between you and Fonzie?

Of course there is a similarity between the actor and the part they’re playing. It is our job to find the similarities, because what we really do as actors is not be a star — what you do is illuminate life.

When you auditioned for the part, did you have an idea that it was going to grow into a sensation?

No. I had six lines. And then it grew.

Did you ever get a sense the character was over the top? You have become associated with the phrase “jump the shark.”

That was somebody’s opinion. I met that gentleman [Jon Hein] and did his radio show. We went on to be a hit for the next five seasons [after the shark episode]. It didn’t matter to me.

Adam Sandler mentions you in his Chanukah song. Why do you think it is that, as he says, so many Jews are in show biz? What is it about the Jewish experience?

I have always respected that you can take anything away from a human being, but you can’t take their imagination and their intellect. They travel with you wherever you go in the world. I think perhaps the oppression for all those thousands of years — if you don’t laugh, you don’t survive. I think it became a survival technique and an opportunity, a great one, because humor heals a lot of wounds. There is that whole theory that laughing makes you better.

What has being Jewish meant to you over the years in your career and in your life?

Did you find that growing up with dyslexia made you work harder to become an actor?

I sometimes wonder — I’m not sure that I would have had the most wonderful life if I was not challenged. My parents did not want me to be an actor; they didn’t want me to be who I wanted to be. But I got a lot a lot from their being survivors. It gave me a sense of that determination.