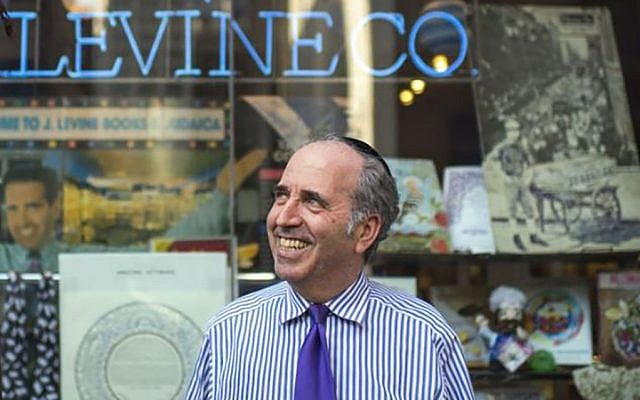 Daniel Levine outside of J. Levine Books on West 30th Street, which has drawn foot traffic from rabbis and professors, priests and pastors for more than 30 years. Steve Lipman

In the last 30-plus years, Daniel Levine, owner of J. Levine Books and Judaica in midtown, estimates that “hundreds of thousands” of customers have walked in the plate-glass front door of his business. Their ranks have included regular customers of all denominations of Judaism, rabbis and professors, priests and pastors, members of intermarried families, and representatives of several TV shows and movies looking to buy or rent some Judaica items.

As of next month, the foot traffic will cease.

Levine, who has headed the 114-year-old family business for 40 years, will announce next week that J. Levine’s 2,000-square-foot, brick-and-mortar store will close at the end of May, The Jewish Week has learned. Levine said he will be maintaining a scaled-down version of its online store (levinejudaica.com).

“There is no future for retail,” Levine said.

Levine, the firm’s fourth-generation owner, who brought J. Levine into the 20th century by computerizing his stock of more than 30,000 items and introducing an extensive online catalog, could not overcome the 21st-century challenge of the internet. “I didn’t see any way I could compete,” he said.

The business, which began on the Lower East Side in 1905 and moved to its present location, on 30th Street off Fifth Avenue, in 1983, fell victim to two powerful trends: assimilation (fewer Jews interested in Jewish tradition or in buying Jewish books or art or artifacts) and the growing prevalence of online sales (people still interested in Jewish tradition do business at amazon.com and at any number of internet-based booksellers, including the publishers themselves).

Levine, which weathered the national decline in business that affected many companies during the Great Recession that began in 2008, fell prey to the same shift in internet-based buying patterns that caused the Borders firm to shutter its stores across the country, forced Barnes & Noble to close many of its stores and has threatened many independent bookstores.

“The next generation doesn’t shop in stores,” Levine said. “That’s the nature of the world.”

Sitting in his cramped office one morning this week, awards he and his business have won lining his wall and trendy pop renditions of Jewish liturgy playing on a loudspeaker in the background, Levine said three full-time employees and two part-time ones, most of them long-term workers at the store, will lose their jobs when J. Levine closes.

“That’s the hardest thing for me,” he said.

On the front door he has posted hand-lettered sign that states, “SALE. Lots of books. 50% off.”

Inside the store, the shelves contain the books and CDs, kippot and taleisim, ketubot and Kiddush cups that for decades brought in tourists and residents of the borough. “They’re not going to go to [the Jewish bookstores in] Brooklyn,” Levine said of his Manhattan clientele.

Unlike many Manhattan firms, J. Levine, because of a close relationship with his building’s owner, did not have to contend with exorbitant rent increases, Levine said. Spiraling rent was the reason that Manhattan Judaica, located near the heavily Jewish Diamond District on West 47th Street, cited for going out of business eight years ago.

The closing of J. Levine leaves Manhattan, once home to dozens Jewish of bookstores, most of them early in the previous century on the Lower East Side, especially on Norfolk Street — where J. Levine began — with two free-standing ones:

In addition, Jewish bookstores and gift shops are located at Manhattan museums and other Jewish institutions, and at a dwindling number of synagogues. And many Jewish community centers offer a large selection of books during their annual bookfairs.

In the outer boroughs, especially in the heavily Orthodox neighborhoods of Brooklyn and Queens, Jewish bookstores are flourishing.

The wider reduction in the number of Jewish bookstores is “not a sign that Judaism is in decline,” said Jonathan Sarna, professor of American Jewish history at Brandies University; it’s a sign that customers are buying their Jewish stuff in different ways.

He compared the situation of Jewish bookstores to that of kosher butchers, whose business suffered when kosher meat became available, at cheaper prices, in large Jewish and non-Jewish supermarkets. “There was no way that many kosher butchers could compete. It does not mean that fewer people are keeping kosher.”

“There is a certain sadness” to Jewish bookstores closing, said Jeffrey Gurock, professor of American Jewish history at Yeshiva University. In their heyday, he said, “they were cultural institutions where Jews ran into each other and discussed Jewish books.”

In other words, he said, they were social meeting places, not simply business venues.

Jewish bookstores often serve as the location for afternoon mincha prayer services, attracting worshippers from nearby office buildings; Levine would give a two-minute dvar Torah after Mincha in his aisles.

Gurock added that large number of Jewish books “are readily available” at large, “general market” bookstores like Barnes & Noble – or were available, until those stores suffered their own decline. The prevalence of non-Jewish stores selling a wide range of Jewish books shows “how integrated Jewish culture is into the general market” of US culture, Gurock said.

The closing of J. Levine is “a message to others who are thinking of opening Jewish bookstores” said Sarna. “It’s cheaper and easier to shop at Amazon.”

Sarna said that when he gives speeches, where his books are often available for sale, he typically hears people tell him, “I bought your book at Costco. It’s cheaper there.

J. Levine has been a presence in Manhattan since large number of Jewish immigrants began arriving here in the early 1900s.

It was founded by Hirsch Landy, a Torah scribe from Lithuania who immigrated to the United States in 1905 and settled on the Lower East Side. His son-in-law, Joseph Levine, expanded the business, and Levine’s three sons developed the firm into a department store of Jewish books and Judaica.

Daniel Levine, who first envisioned a career in show business, took over J. Levine after two of the brothers retired, and the third — his father Seymour — made aliyah.

At one time, Levine said, walk-in business accounted for about 80 percent of his business. In recent years, he said, it decreased to 50 percent, as he expanded the firm’s online presence. Every year — except in the weeks before major Jewish holidays — he would notice fewer people coming in.

Next year, Levine said, customers who wish to buy a Haggadah or a box of shmura matzah for the holiday from his business will have to do it with a computer click, not by walking in the front door.