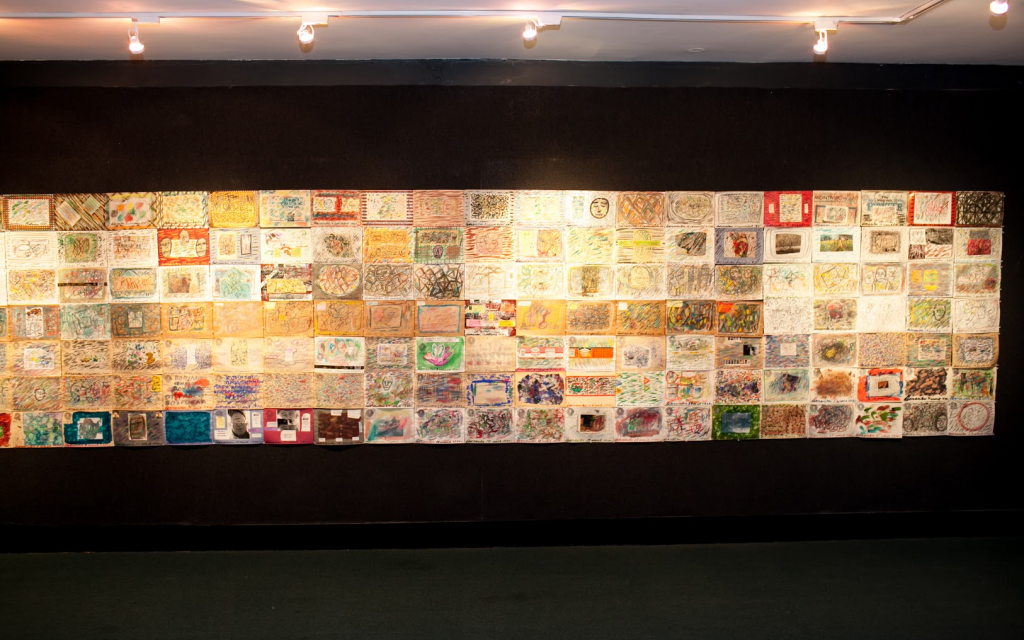 The afternoon I visited the National Arts Club to see several galleries of Russian-American art, one of the galleries was set for an evening reception to honor local firemen who lost their lives.

Amidst the art were tables with American flags and greenery, along with bowls of candy in red, white and blue wrappers. Looking at the art by Russian-American émigré artists, many of whom look forward with optimism about their new land while still keeping up connections with their former homeland, I wasn’t sure if the flags were part of the show.

They were not. But they seemed like a fitting backdrop. As do the busts of George Washington and Joseph Stalin, part of the “American Dream” series by artists Vitaly Komar and Alexander Melamid.

As part of the 14th annual Russian-American Heritage Month, the Russian-American Foundation organized three exhibitions showcasing the “third wave” of Soviet immigration to the United States, which included many artists, writers and musicians. The curators Matthew Drutt, Marina Kovalyov, Ivan Tolstoy and Jeffrey Wechsler see the period between 1970 and 1990 as the “Golden Age of the Russian American Diaspora.” One exhibition focuses on the work and staff of the daily tabloid newspaper Novy Amerikanetz and Russian culture in New York City; another showcases the work of the late conceptual artist Vagrich Bakhchanyan including a visual diary that fills a room; and the last features the work of two prominent photographers, Leonid Lubjanitsky and Lev Poliakov, in black-and-white. Throughout, the work is celebratory, provocative and full of beauty.

“The Third Wave and ‘Novy Amerikanetz’: Russian Culture in New York 1970 to 1990” includes photographs, paintings, drawings and objects, many not previously exhibited, highlighting the writers and editors, as well as the people they covered. Some of the photographs appeared in the pages of the newspaper, others show life behind-the-scenes. Nina Alovert’s photograph of people on a Brooklyn street reading the newspaper, covering their faces with open pages, is a striking reminder – with a sense of humor — of the connection between a community and its press.

Artist Vagrich Bakhchanyan came to the U.S. in 1974, and worked in a variety of media, whether through his minimal works in brush strokes or his layered collages, capturing moments in his spirited life with vibrancy and creativity. The “Diary” drawings cover a year in the life of the artist – the colorful pages include ticket stubs, deconstructed images, faces and swirls of color; some feature short texts that hint at meaning.

In “Joseph Brodsky and His Time,” photographers Lubjanitsky and Poliakov include powerful and sensitive portraits of Brodsky and his contemporaries, with some of Poliakov’s images shot in the former Soviet Union. Included is Poliakov’s portrait of Bakhchanyan during one of his installation works, when he is covered with small slips of paper with dates.

A third-generation photographer, Lubjanitsky is in the gallery when I visit, and explains that he was inspired by the work of his father. When he arrived in New York, he went to work for Richard Avedon, whom he thinks of as a mentor. Lubjanitsky’s image of Brodsky along with Mikhail Baryshnikov, posed casually in conversation, appeared in the French edition of Vogue in 1981.

The exhibitions at The National Arts Club, 15 Gramercy Park South, Manhattan, are on view through late afternoon on Saturday, June 11th.