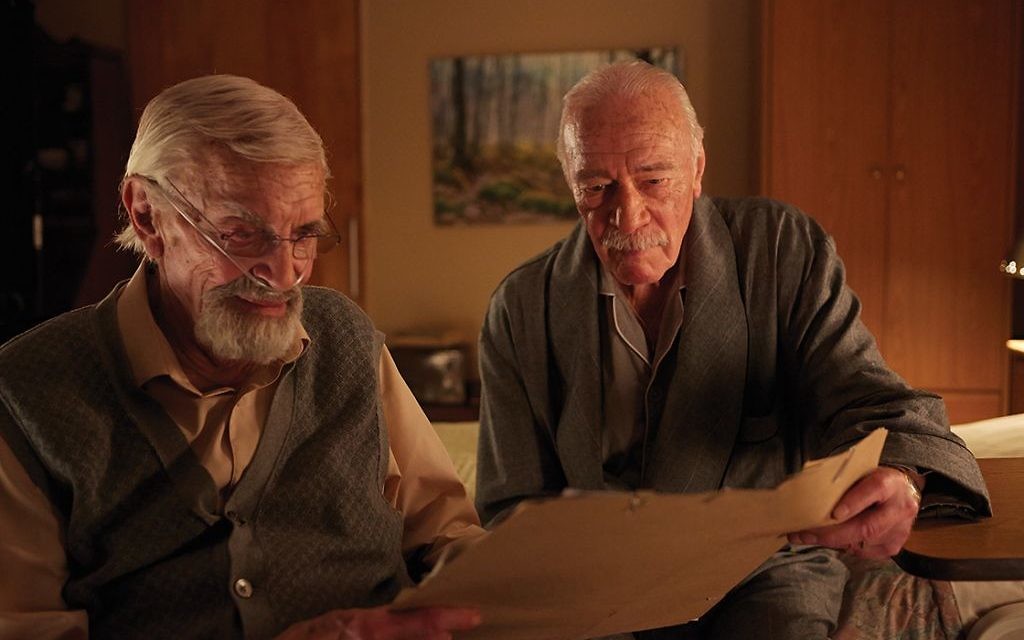 The phone line between Toronto and New York seemed to crackle with impassioned urgency as the film director Atom Egoyan spoke of his compelling new movie, “Remember,” due to open here next week at the Angelika Film Center.

“Now is the last chance for people who have experienced the Holocaust at first hand to receive some kind of resolution,” he said. For him, this has special relevance, since the past year marked the centenary of the genocide of his own people, the Armenians, for whom direct closure is no longer possible.

In the movie, which begins and ends in a Jewish nursing home in New York, two aging residents bond through the old school tie of their previous incarceration at Auschwitz. On the last night of sitting shiva for his wife of 50 years, Zev, played by Christopher Plummer (“Girl with a Dragon Tattoo,” “The Sound of Music”), is reminded by his former fellow inmate Max, played by Martin Landau, of the pledge he had made to his dying wife: exact retribution from the Nazi commandant responsible for killing their families. Max, having spent his life researching Nazi war criminals with the Simon Wiesenthal Center, knows that the man has entered either the United States or Canada illegally under the assumed name of Rudy Kurlander. As many as four Germans have used that name to get into the country.

While Max, confined to a wheelchair, masterminds the action, it is up to the more able-bodied Zev to track them down and identify the guilty party. Besides Max, Zev is the only living survivor who can remember what the commandant looked like. However, Zev is suffering from increasing memory loss. So Max must write down a list of instructions for him in the form of a letter. Zev must flee the nursing home, travel to a gun shop, and purchase a weapon for the job. His choice is a Glock — from Austria.

Questioned about the morality of his protagonist’s taking justice into his own hands, Egoyan spoke unequivocally about the rightness of the act. “Is there the remotest possibility that their target would ever come within reach of a court of law? Factors of age and physical and mental deterioration, besides the political backtracking above all, would grant him immunity.” The perpetrators and survivors may die at any moment. Closure is of the essence. There is room for compassion, but not here.

Egoyan considers Landau’s portrayal of Max the movie’s tour de force. “All the time he is burning with rage,” he said. “The assumption is that it is directed at his family’s killer, and of course it is, but what really gets him is not so much memory of the mass murder but its contemporary equivalent, Holocaust denial, in which civilized countries participate and which threatens to expunge the victims’ last trace.”

According to a rabbinical saying, angels guide us on the path where we are resolved to go. Egoyan said, “If it is Max’s rage that fuels Zev’s progress, even he could not have dreamed that Zev, who cannot remember the basic facts of everyday existence, such as — poignantly — that his wife of 50 years has died, never mind Max’s complicated instructions, would ever be able to romp back and forth across continents and accomplish the goal for which he has been set up.” Improbably, everyone Zev meets in his travels — hotel receptionists, gun shop owners, border inspectors, security guards — springs to his aid. His sweet ineptitude brings out the best in others, yet the road on which he has set out is engulfed in darkness. “This single character [Zev] is freighted with so much history,” the director mused, confessing that for him the Holocaust had become an obsession.

The only experience Egoyan has personally had of genocide is of its denial.

Born in Cairo in 1960, Egoyan was a toddler when he and his family immigrated to Canada, at a time when Armenian businesses were threatened with nationalization by Egyptian President Nasser’s pan-Arabist movement.

From a very early age he had felt an outsider. “I spent my childhood in Victoria, British Columbia. At the time Victoria was very Anglo and nobody knew what an Armenian was. They thought I was Jewish, Italian, Greek. My goal, like most young people growing up, was to fit in as much as possible.”

Only while attending university in Toronto did he find a viable Armenian community. There he became increasingly involved in issues around the Armenian genocide, which fueled his own sense of identity.

“Only then could I look at the fact that my father’s parents were survivors of that genocide,” he said. At this point our conversation was interrupted when Egoyan’s father phoned in to talk. Respectfully, Atom told him they could speak in another half hour and sent him his love.

“While ‘Ararat,’ the story in part of my own third-generation experience of the Armenian genocide, was concerned with the transmission of trauma over several generations,” he said, “in ‘Remember,’ what was most fascinating is that the trauma was explored by the last living survivors and perpetrators of the Holocaust. The trauma is direct and still very present in these characters’ lives.”

Unlike the Oscar-winning “Son of Saul,” “Remember” is a suspenseful thriller with a straight timeline, driving toward its climax without any flashbacks on the actual Holocaust and it does not rely on sensational effects. It is a deceptively simple action-packed road movie, completely accessible to the widest possible audience. Despite the seemingly comical premise of having a forgetful 90-year-old as its central protagonist, the director maintains that at its core it is “deeply serious.”

Did the director consider memory loss an adequate metaphor for Holocaust denial? Does the protagonist ultimately act in full knowledge of what he is doing?

“In fact, memory loss due to aging works in reverse to the mechanism of Holocaust denial. “The details of short-term memory — the pathos of Zev’s calling out the name of his wife, “Ruth, Ruth,” in his most unself-conscious and vulnerable moments — are the first to go. “But long-term memory, what is true about the self. … Memory of one’s past does not disappear so fast. He is far from being there. But I am not prepared to say. So much is a matter of interpretation.”

Was there an element of free will, even redemption, in the final double act, not just another “submission to orders?”

“Yes, certainly he did not act simply as a robot in the end, but out of conviction. I think the movie ends as it does because he sees no way of knitting together the person he was with who he had become. But there are countless interpretations. No, I can’t say.”

Does the soul, or the person, have a single identity or are some people so changed by new circumstances as to become totally different human beings?

“Ah, that is the core question of the film, the one the film never articulates, but every viewer is faced with,” he said.

Freema Gottlieb is the author of “The Lamp of God: A Jewish Book of Light and Jewish Folk Art.” She has written for the New York Times Book Review, the Times Literary Supplement and the Jewish Quarterly, and is a frequent contributor to The Jewish Week’s column Sabbath Week.