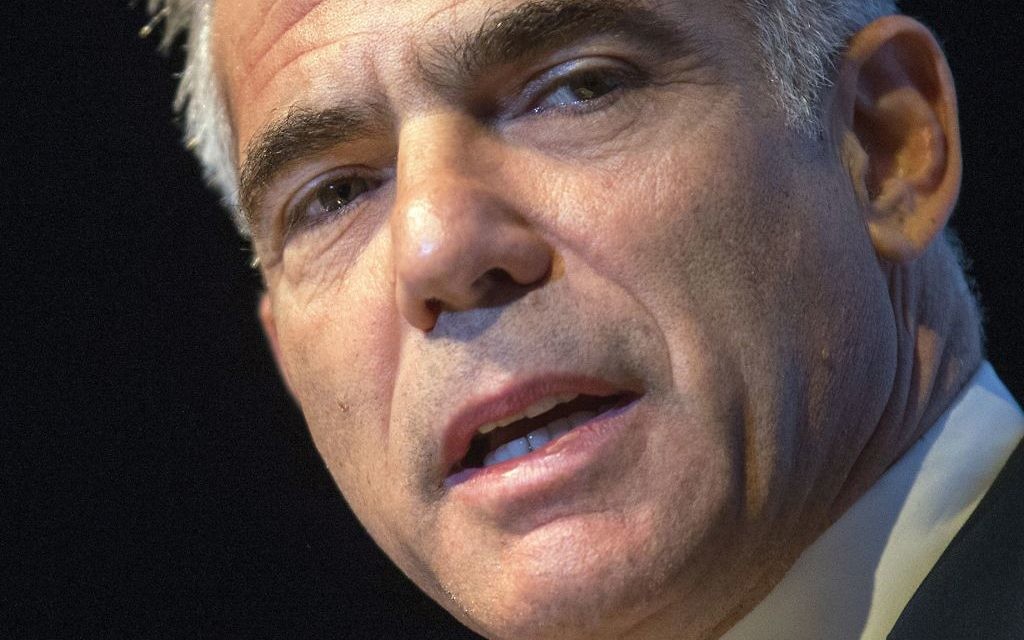 At a time when Israeli Prime Minister Benjamin Netanyahu is calling on American Jews to convince Congress to reject the Iran nuclear agreement, a prominent Israeli leader is telling them that it is OK to disagree.

“We don’t want you to choose between being American and being Jewish,” Yair Lapid, the founder and chair of Israel’s opposition centrist Yesh Atid party, told more than 500 participants of a webinar Monday organized by the Jewish Council for Public Affairs. “There shouldn’t be two conflicting possibilities. You should be living together peacefully, and Israel has a responsibility to make sure you are not put in this position.”

Lapid candidly told his American Jewish audience: “All Israelis are full of appreciation and are thankful that you are out there for us. But you have a conscience and have to make your own choice. It is not like Israel expects you to align with us automatically. We are telling you what we think — that this is a bad deal. If you agree with us, tell your congressman. But we don’t want to put you to a test. … What we need now is further quiet discussion.”

Lapid, a member of the Knesset, said the hateful attacks by Jews against Jews who disagree with them about the Iran nuclear deal has “tortured” American Jewry recently. That bitterness reached a fever pitch last week in the wake of Rep. Jerrold Nadler’s vote in favor of the deal; much of the criticism came from the Orthodox community, which has been strongly against the nuclear deal, which, they argue, won’t prevent Iran from getting a nuclear bomb.

The rhetoric and ads on both sides of the issue have become personal, sometimes crossing the line of civil discourse. The Jewish Week this week rejected an ad blasting Nadler that editors found “incendiary” in its wording and imagery.

Rabbi Leonard Matanky, president of the Orthodox movement’s Rabbinical Council of America, said he “received a very nasty tweet” after he tweeted that he was “proud to support the rabbinic position opposed to the Iran deal.”

“He called me a traitor … and suggested that Israel is a greater threat than Iran,” he said of the tweet.

“We need to maintain a civil discourse, but we have every right to advocate,” Rabbi Matanky said. “Both sides perceive this as a life or death issue. … Unfortunately political discourse in the U.S. has become extreme. This is what we see in many political issues that in the long run are less threatening than Iran. Look at the language used now in the presidential campaign. The Jewish community is a small part of the broader community, and what we are seeing in the Jewish community are the emotions and fears and language of current American politics.”

The president of the National Council of Young Israel, Farley Weiss, said the “vitriol on this started with the attacks on Sen. [Chuck] Schumer” after the New York Jewish Democrat announced his opposition to the nuclear agreement.

“There were attacks by both the administration and other left-wingers against him,” he said. “They questioned his patriotism and suggested that he cares more about Israeli concerns than American concerns. That to me is where I thought the first outrageous comments came. It was done to intimidate [other] Jewish lawmakers not to oppose the deal. And I think that led to the vitriol in the campaign and the response. I’m not justifying it, but that was the lightning rod that started everything.”

Weiss noted that the “vast majority of Jewish organizations oppose the deal for good reason, and I think two-thirds of Americans oppose it. … The only reason why so many lawmakers came out in favor of the deal is that the Obama administration said that if there is no deal, the only outcome would be war.”

Weiss added that he does not “know of anyone who supports it who would say it is a good deal — they say it is better than the alternative.”

Nathan Diament, executive director of the Orthodox Union’s Advocacy Center, said he recognizes that there are “deep and passionate convictions in the community over whether the deal should be supported or opposed.” But he said that kind of disagreement is different from the “extreme rhetoric” being heard, which he denounced.

The OU is planning a rally for “hundreds of rabbis” in Washington, D.C., next week, and a group trying to tamp down the rhetoric is planning a day of prayer next week. The Orthodox group Acheinu is calling on Jews from across the religious spectrum to recite Chapters 20 and 130 of Psalms anytime between 7 a.m. and noon on Tuesday. It is calling the event a Day of Jewish Unity, and a video it produced about the endeavor has been viewed more than 38,000 times.

But the group said the video has also elicited anti-Semitic and virulent comments, such as “Death to Israel.”

A spokesman for the group, Aaron Troodler, pointed out that the “days leading to the High Holy Days are certainly an appropriate time for reflection, repentance and prayer. The days leading up to perhaps the most consequential congressional vote in our lifetime is a compulsory time for unity and prayer.

“The fact that the schedule is such that the vote will fall around the High Holy Days is something we need to take heed of and do what is appropriate during this holy time on the Jewish calendar. At a time like this, when the Jewish people are facing an existential threat, we need to find ways to come together and unite as a nation rather than wasting our energy fighting among ourselves.”

He noted that Tuesday was selected for this event because it is the 82nd anniversary of the death of the Chofetz Chaim, who in pre-war Europe was renowned for preaching civility. Troodler said a delegation plans to travel to Belarus to pray at his grave.

Troodler added that in light of the “vitriolic diatribes that have ensued as a result of the upcoming congressional vote on the Iran deal, it is critical that we highlight the need to inject more civility into our public discourse.”

In his comments in the JCPA webinar, Lapid defended Nadler for his decision to support the nuclear agreement, criticizing those who posted hateful messages on Nadler’s Facebook page, such as one that said: “You failed the American People, you Failed as a Jew and you failed Israel!!”

“Jerry Nadler is very pro-Israel,” Lapid said. “He opposed the Iraq war not because he is anti-war but because he said if Iraq falls it would increase the influence of Iran in the Middle East. To say Jerry Nadler does not understand the risks Iran poses is not true.”

He was also critical of those who use Holocaust imagery to oppose the deal, saying his father was a Holocaust survivor who “disliked comparisons to the Holocaust.”

“This is not the Holocaust because the IDF is the strongest army in the Middle East,” he said. “We have very good intelligence and we have American friends. We will act before a Holocaust will come, so we should not speak of Holocaust visions.”