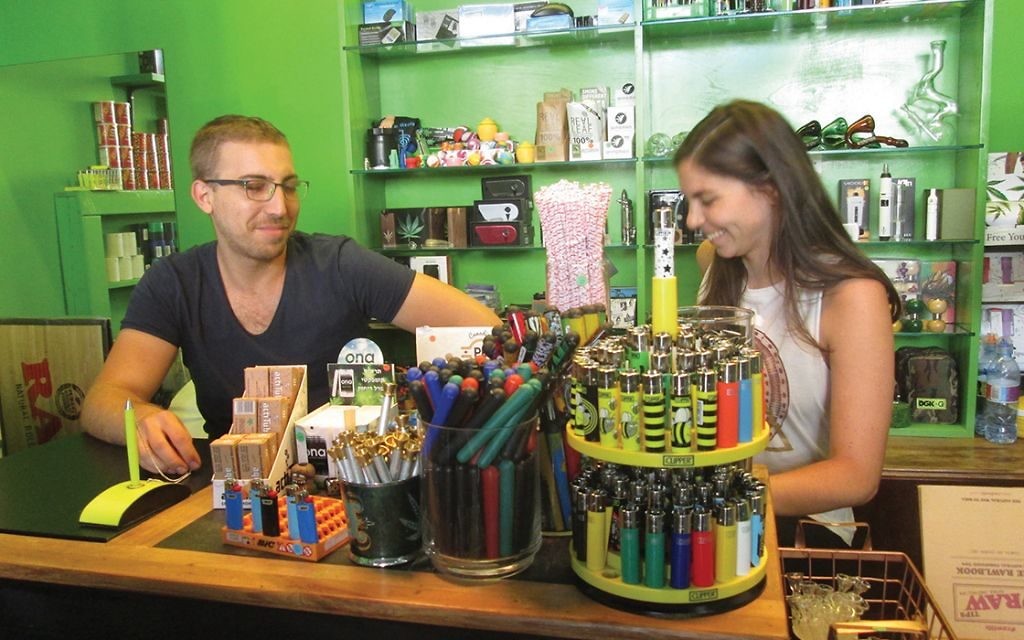 Tel Aviv — When Yossi Feuchtwanger, 68, needs to refill the medication that controls his severe neurological pain, he heads to the Tel Aviv-based medical marijuana distribution center run by Tikun Olam, the Israeli company that produces and sells several strains of medical cannabis.

“I smoke it, and after just two inhalations I’m in much less pain,” Feuchtwanger said as he sat in the waiting room of Tikun Olam’s nurses’ clinic where he and many of the 25,000 Israelis who hold permits to use medical cannabis come for evaluations.

Feuchtwanger, who was able to put away his crutches soon after he began taking medical cannabis more than a year ago, experienced an unexpected side benefit.

“I no longer have to use an oxygen machine to control my COPD,” he said, referring to Chronic Obstructive Pulmonary Disease, a serious lung condition.

Success stories like these are the reason hundreds of medical cannabis researchers, growers and investors will gather here next week to attend the International Medical Cannabis Conference, which will be held Sept. 11-13.

The conference — the second major medical cannabis conference to be held in Israel during the past six months — “will bring together the industry’s ecosystem of all the players: in business, research [and] medical and botanic agricultural,” said Ofer Spottheim, the general manager of Cann10, a medical cannabis-focused incubator, which is co-organizing next week’s conference.

Spottheim said Israel’s cannabis industry, which generates “hundreds of millions of dollars” in business annually, promises to expand even more thanks to new Israeli government regulations and investors eager for the next great product.

The number of Israelis permitted to use medical cannabis is expected to rise sharply following the Ministry of Health’s recent decision to authorize more doctors to prescribe it, Spottheim said. As it stands now, every Israeli patient pays 400 shekels (roughly $106) per month for the cannabis-based medications they eat, drink or smoke.

Most, if not all, Israeli medical cannabis companies view Israel’s relatively small market as a stepping-stone to a wider global market. In the U.S. alone, 25 states now permit medical cannabis use, and the potential for recreational use could grow if states approve such a move.

Investors say the country offers something few other countries do: a long history of government-sanctioned medical cannabis research.

In contrast to the U.S. government, which in August decided to permit a small number of research universities to study the medicinal effects of cannabis using government-sanctioned plants (until now only the University of Mississippi had that honor), the Israeli government has long permitted researchers to obtain cannabis through legal channels.

As early as the 1960s, Raphael Mechoulam, an Israeli professor of medicinal chemistry at the Hebrew University of Jerusalem, began studying cannabis provided by the police.

In 1964, Mechoulam, then at the Weitzmann Institute, isolated and synthesized THC, the cannabis plant’s main psychoactive chemical. He later went on to isolate chemicals in cannabis that provide relief for certain medical conditions without producing a high.

Mechoulam’s pioneering 1980 clinical study showing that cannabis can dramatically reduce seizures in children with epilepsy laid the groundwork for several clinical trials in Israel and abroad.

Interviewed in his Hebrew University laboratory, Mechoulam, now in his 80s, recalled how, when he first decided to study cannabis, he mistakenly asked the police department and not the Ministry of Health to provide him with some pot.

“They checked whether I was trustworthy and gave me five kilograms of hashish. I carried it on a public bus and everyone on the bus could smell it,” he said with a laugh.

Although the Ministry of Health has since introduced stricter regulations, “it is still much, much easier to obtain it in Israel” than the U.S, he noted.

Jeffrey Friedland, CEO of Friedland Global Capital and a medical cannabis investor in the U.S., Canada and Israel, said he’s especially bullish about Israel “because I believe that the real money in the cannabis industry will be made by providing patients with real pharmaceuticals based on real science. That led me to Israel.”

Friedland, who authored the book “Marijuana: The World’s Most Misunderstood Plant,” said, “Physicians are frustrated. One told me he doesn’t feel right telling patients, ‘Take two tokes and call me in the morning.’ Israel is way ahead of the pack when it comes to researching dosage information and coming up with data.”

Friedland said that despite the new regulations, U.S. research centers don’t appear eager to start their own medical cannabis programs. “It is still incredibly challenging to obtain the various required approvals, and there are significant limitations on the research itself. The bottom line is that the U.S. is not a friendly environment to research cannabis,” noting that the Israeli government’s commitment to the industry is based on a couple of factors: “It employs researchers and attracts investment capital into the country. From an investor’s perspective, why try to swim upstream?”

Dr. Ascher Shmulewitz, a physician, inventor and serial entrepreneur in Israeli cannabis-related biomedical technologies, noted that “cannabis has been used as a drug for thousands of years. In fact, it was the most prescribed drug in the U.S. in the beginning of the 20th century."

Shmulewitz is CEO of Therapix Biosciences, an Israeli pharma company specializing in development and commercialization of approved drugs that are based on cannabinoid-based molecules. The company is developing treatment for Tourette syndrome and impairments in cognitive functioning, including early stage Alzheimer's.

“I don’t see cannabis as any different from aspirin or anything else," Shmulewitz said. "It has definite clinical benefits. It should be regulated like any other legal drug.”