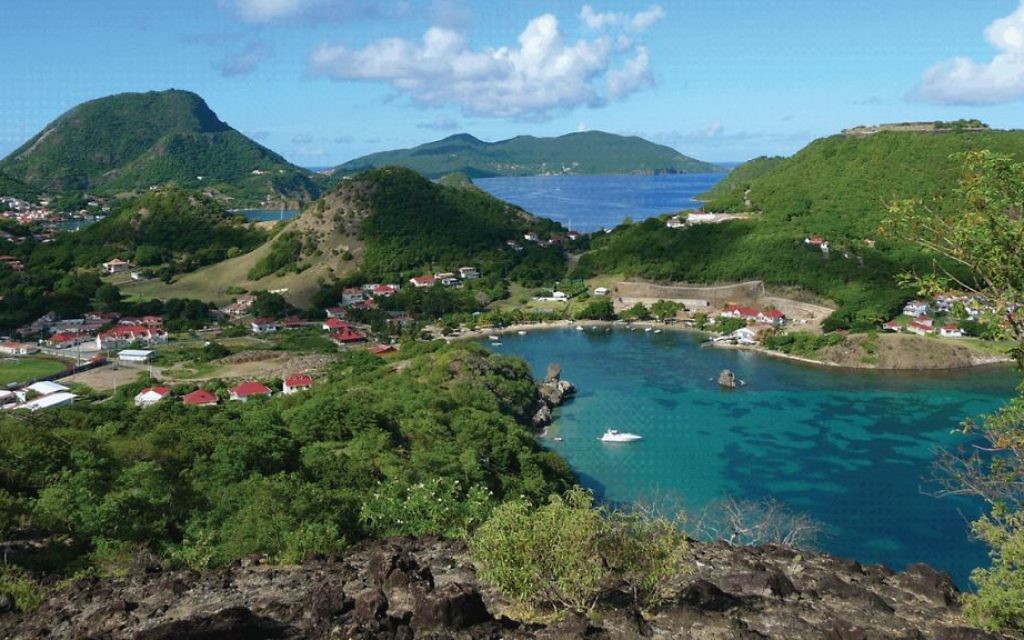 Some people came away from last week’s summit on climate change fretful about our planet’s future, or optimistic about the work ahead. Personally, as I perused a front-page New York Times photograph of the ocean-lashed Marshall Islands, I thought about all the islands I’d better visit before the sea swallows them up.

I can’t picture a world without Miami Beach, but the islands of the Caribbean are menaced by an even more present danger — volcanoes. After all, it was only a few years ago that neighboring Montserrat went from tropical paradise to latter-day Pompeii. Now, the sulfurous puffs of neighboring Mt. Soufrière menace tranquil French Guadeloupe.

This is one of the prettiest corners of the Caribbean, where French refinement meets laid-back island culture in a setting free of high-rises and crowds. Named by Columbus, Guadeloupe was a powerhouse of the 17th-century sugar trade; in the ensuing centuries, the tiny archipelago was fought over by the British, French, and Swedes, claimed by Napoleon, and was the site of slave uprisings and cholera epidemics.

All that tumult is hard to imagine now. The only reminders are the picturesque ruins of maritime forts, whose steep walls guarded promontories along the mountainous coastline. Today, few places in the world feel as relaxed and out-of-the-way as Guadeloupe, with its long, luxuriant stretches of powdery white sand, its unspoiled green hills and mangrove swamps and boats floating lazily in the harbor. Martinique is the higher-profile and more culturally intense of the French Caribbean departments — and while you hear a mix of French and Creole on Guadeloupe, you may not meet another American.

That could change, as the French territory is hoping to boost North American tourism with a greater variety of flights. In a recent search, I turned up nonstop round-trips between JFK and Pointe-à-Pitre, the its largest city, for just under $300 in January. There are even more options connecting through Miami or Puerto Rico. And once on the island, you can use those euros from your last trip to Paris.

I have long been intrigued by how ethnically diverse these small Caribbean islands are, with accents, foods and — especially — musical styles that reflect an eclectic immigration. With only around 300,000 residents, Guadeloupe is home to Lebanese, Chinese and Tamil Indian communities, as well as locals with African, European, and indigenous roots; enclaves of Bretons and Normans and a tiny Jewish minority round out the mix.

The Communité Culturelle Israelite is a Jewish congregation and community center based in Pointe-à-Pitre; a low-key presence, it serves a diverse group of about 50 families, most of them settlers from France and North Africa.

These layers of culture can be less than obvious in a land so rural, but the distinctive fusion flavor of Guadeloupe is most evident in its low-rise bars at night. The fast, thumping carnival beat of zouk music and the mellow swing of reggae-calypso hybrids are all washed down with strong local rum mixed with brown sugar and lime, a heady national drink.

By day, options for getting around Guadeloupe including renting a car — the two major islands are connected by bridge — or hiring locals to ferry you around by taxi (or, if you care to explore the most exquisite coves of the archipelago, obtaining the use of a boat).

West-facing Basse-Terre is Guadeloupe’s picturesque capital, though only its second-largest city. Ringed by green mountains, Basse-Terre is a colorful mélange of colonial buildings, hilly urban neighborhoods with stunning views, and lively open markets offering some of the tastiest fruit you’ll ever eat: papayas, pineapples, fresh-picked bananas. On the eastern island of Grande-Terre, you trade sunsets into the sea for beachfront cafés at popular spots like St. Anne, on the tranquil southern coast.

Yours truly is no snorkeler, but those who are rave about the Jacques Cousteau Reserve — a vast, protected underwater treasure off the coast of Basse-Terre. The colorful coral reefs are some of the best protected in the world; options for exploring their colonies of colorful fish include snorkeling, scuba diving, kayaking, or joining a tour on a glass-bottomed boat.

For many, a highlight of Guadeloupe is the exquisite nature reserve that sprawls across much of Basse-Terre. A national park of France, the reserve features trails that wend through tropical rainforests, mangrove swamps full of flamingos, cliffs and gorges with more than 100 steep waterfalls. Higher yet is a trail that leads up to the ominous summit of Mt. Soufrière, an active volcano that purrs and puffs above its lush hillsides.

Enjoy the view for now; like dramatic geographies everywhere, the green paradise that is Guadeloupe won’t last forever.

Kosher readers: For an upcoming column about eating kosher while traveling overseas, I’d like to hear about your experiences. What resources do you turn to, both in advance and at your destination? How do you handle the challenges of eating in countries that lack kosher certifications? What have been your best, worst, and most memorable kosher experiences outside the U.S.? Are there specific destinations — countries, cities, restaurants, markets, etc. — you would recommend to other kosher diners? Tell me at hilarasha@gmail.com.