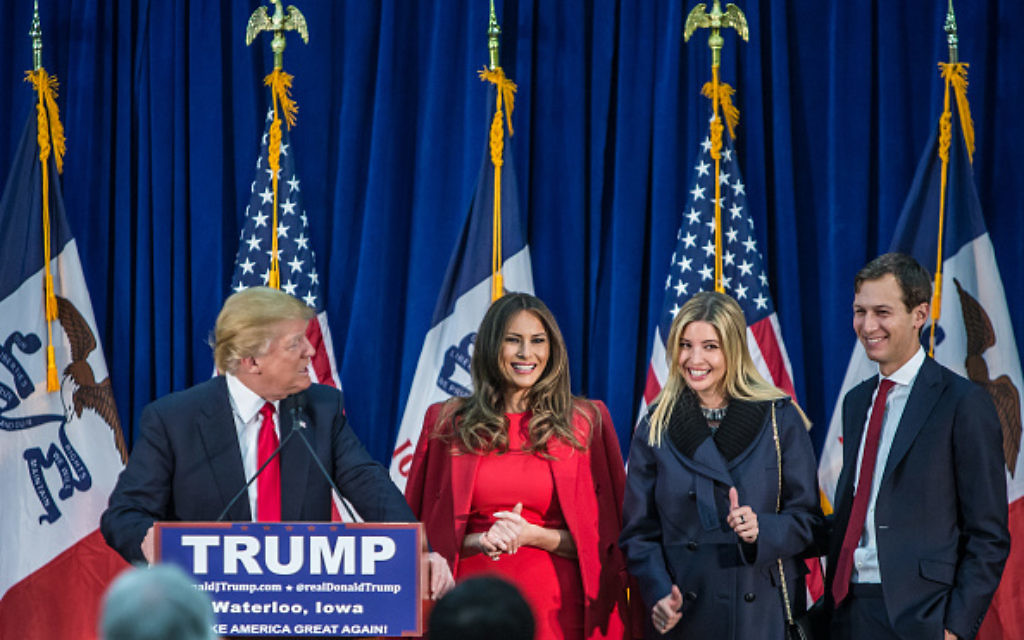 One day after a writer for a newspaper owned by Donald Trump’s son-in-law, Jared Kushner, called out Trump campaign, Kushner responded. In an online letter that went viral, writer Dana Schwartz blasted Kushner for standing by Trump after the Republican candidate’s campaign issued a tweet that Schwartz and others found to be anti-Semitic. What began as a four worded tweet culminated in a 1300 word reply from Kushner posted yesterday on the online site of the Observer, a weekly New York newspaper. Kushner began succinctly;

“My father-in-law is not an anti-Semite” he wrote.

Kushner, who is an Orthodox Jew, included in his account an in-depth description of his grandparents survival of the Holocaust, a personal story he had not yet shared. The rest of Kushner’s essay, “The Donald Trump I Know,” was primarily a defense of Trump against accusations of anti-Semitism that have been made by “journalists and twitter throngs.” According to Kushner, the reason he can speak better to Trump’s true beliefs than anyone else is simple; “I know him and they don’t.”

Kushner’s involvement in Trump’s campaign goes beyond the mere familial connection. According to a recent New York Times report, Kushner’s role in the campaign has evolved to the point that he is the “de-facto campaign manager” of the Trump campaign.

Kushner’s letter described how his wife’s father embraced him and his Judaism since he began dating Trump’s daughter Ivanka. The two wed in 2009 after Ivanka underwent an Orthodox conversion. He highlighted Trump’s comment last week that “Israel is a very, important ally of the United States.” He also criticized those who hold the Republican nominee accountable for the “utterances” of his most “fringe supporters” and accused those who do so of enforcing an “insane standard.”

The tweet that began this media firestorm was sent by the Trump campaign Saturday and featured an image of Hilary Clinton overlaid on a background of dollar bills and a red Star of David with the words “most corrupt candidate ever.” Schwartz was one of many members of the media to comment that the tweet had anti-Semitic undertones. In response, she received vehement anti-Semitic tweets from Trump supporters. These attacks triggered Schwartz into writing an open letter to her boss, Jared Kushner.

Kushner downplayed the actual tweet itself, writing that “the worst that his detractors can fairly say about him is that he has been careless in retweeting imagery that can be interpreted as offensive.”

Schwartz, who is an entertainment writer for the Observer and whose writing talent was praised by Kushner, did not find her boss’s answer to be acceptable.

“He deflected my point entirely: racist people are drawn to Donald Trump. … The fact it's up for debate, in July of an election year, whether or not a candidate is anti-Semitic is heartbreaking” Schwartz told Politico via text message.

Hank Sheinkopf, a veteran Democratic political consultant, believes it is important to be cautious before labeling Trump anti-Semitic. “Things happen in campaigns,” Sheinkopf told the Jewish Week, “but that doesn’t mean it is anti-Semitic.”

Ester Fuchs, a professor of public and international affairs at Columbia University, agrees that Trump himself is not anti-Semitic but she makes a distinction between his personal views and those of his campaign.

“He doesn’t have to be an anti-Semite or racist himself,” said Fuchs, “he is the candidate and therefore he is responsible.” “To say that a candidate can’t be held responsible for what his supporters do flies in the face of history and what we can expect from candidates,” she told The Jewish week.

When was the last time anti-Semitism was an important issue in a presidential campaign? “Not since Nixon” she said, “and that was light compared to this.” Tapes released of Richard Nixon recorded him making comments about Jews that many found anti-Semitic. Although, Nixon is still remembered fondly for his support of Israel during the Yom Kippur War.

Whether or not this will actually affect the Trump campaign in any significant way remains a question. Sheinkopf does not see this materializing into a significant issue “unless people besides Jews start talking about it as an improper act, because Jews talking about it has absolutely no impact.”

“Jews don’t matter, they are all going to vote Democratic anyways,” he said.

Fuchs agrees that Jews will vote overwhelmingly democratic regardless, but she still maintains that it might be a bigger issue among “a group of moderate and swing voters who do not accept the idea that it is okay for a campaign to offer anti-Semitic or racist appeals.”

A couple of Kushner's relatives did not find his response to be in good taste and spoke their minds about it on Facebook today. Their criticism revolved around Kushner invoking their shared grandparents in his defense of Trump. Marc Kushner, one of the cousins, wrote on Facebook that his "takeaway" from the Holocaust story differed from Jared's version. Jacob Schulder, another cousin, commented on that post that it is a "shame" that his grandparents were "dragged" into this story.

Trump, for his part, told supporters at a rally in Ohio that he regretted that the original tweet was ever deleted, as he continues to argue that the star tweeted is not a Star of David. Last night he tweeted a photo of a sticker book for the Disney movie "Frozen"that features a similar-looking six-pointed star to help make his point.

JTA contributed to this story.