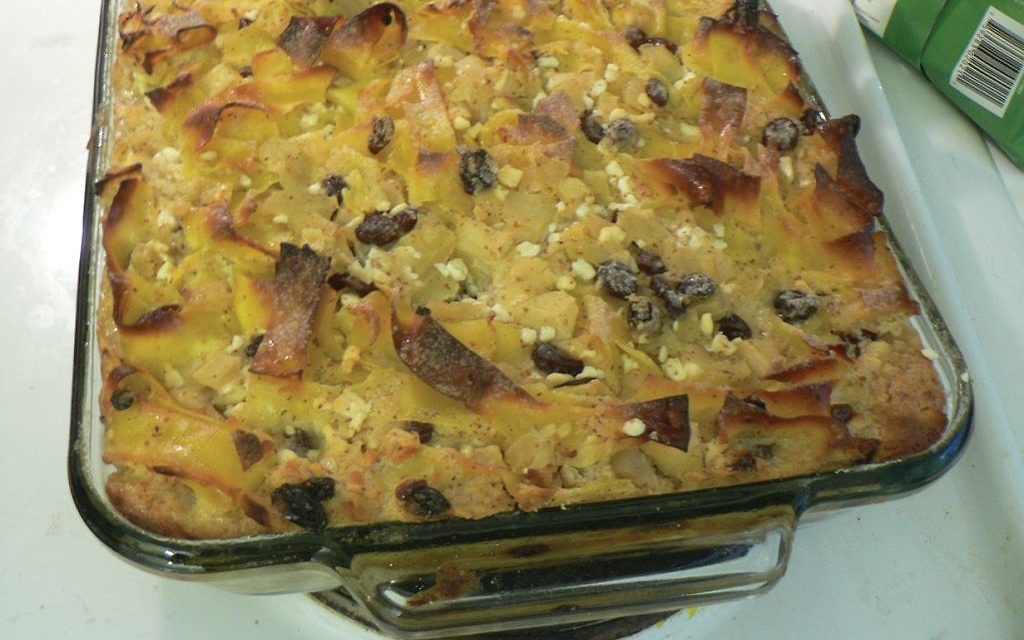 On a long-ago Shabbos afternoon, in the early 1800s, the Rimanover rebbe was strolling the Polish countryside alongside the rebbe of Ropshitz. For three hours, the story goes, as they walked they mused about the mystical secrets within kugel. After all, in a holy world where nothing was casual, several other rebbes had differing opinions on whether potato or lukshen (noodle) kugel possessed the deeper mysteries.

A few miles away, through the Polish woods, likely on another Shabbos afternoon, HaHozeh (the Seer of Lublin) wanted his chasidim to understand a key teaching about the Other World. After we die, he explained, just as our virtues and transgressions will be weighed on the scales of the Heavenly court, “so, too,” said the Seer, “they will weigh all the kugel we ate in honor of Shabbos.”

On this side of the Atlantic, two centuries later, within sight of the Statue of Liberty, kugel still intrigues. Avery Robinson, 26, whose thesis on kugel recently earned him a master’s in Judaic studies from the University of Michigan, was addressing a gathering at the Museum of Jewish Heritage. One immigrant from the former Soviet Union told Robinson that she only knew lukshen (noodle) kugel in the old country; in America, potato kugel was a revelation.

Today, Chabad’s website lists 19 varieties of kugel, but can’t quite explain any of them. “Kugel is one of those words that doesn’t really have a good English translation,” writes Miriam Szokovski on Chabad.org. The most popular kugels are lukshen (cinnamon noodle); potato; and Yerushalmi (a spicy noodle recipe formulated in Jerusalem). Gil Marks, author of “The Encyclopedia of Jewish Food,” explains that the Yerushalmi was born when European Jews began moving to Israel in the late 1700s, bringing recipes from across Eastern Europe. The Yerushalmi was a fusion of recipes: lukshen, ground black pepper and caramelized sugar.

“Almost anything can become a kugel,” Szokovski continues, “broccoli kugel, onion kugel, rice kugel, cauliflower kugel, butternut squash kugel,” zucchini, even heart of palm and tomato kugel. A kugel can be almost anything. Got that?

To the Seer, Robinson tells us, “Kugel was the food of Shabbat, the experiential taste.” Yiddishkeit, to the Seer, had to be more than a mathematical reckoning of sanctity and sins, but also the immersion and pleasure in the Jewish experience, the most quintessential experience being Shabbos and the Shabbos meals. And yet, that “experiential taste” had changed 100 times. “We are culinary chameleons,” says Robinson. “What we eat today is very different than what we ate 80 years ago, which is different from what we ate 80 years before that.”

The potato, for example, is native to the Andes Mountains of South America, not making its way east across the Atlantic and into shtetls until deep in the 1700s. Like the difficulty of finding potatoes, before pre-packaged noodles, lukshen kugel wasn’t the easiest recipe, either. The first kugels, in the 12th century, were neither potato nor noodles but dumplings of miscellany, tucked deep into pots of chulent (the Shabbos stew) when, in the years before private ovens, chulent was left to cook in communal ovens from late Friday afternoon until mid-day Shabbos. It was then carried home, often by the older children, after davening.

Like amphibians leaving the sea, the pivotal evolutionary moment came when “kugel left the chulent pot,” says Robinson, “and became a dish of its own.” Nevertheless, the kugel recipe in the first English-language Jewish cookbook (London, 1846) still suggested that kugel be cooked as a dumpling within a chulent. The early kugels, says Robinson, were made primarily of suet, flour, bread and spices. The first American Jewish cookbook (1871) still had kugel-in-chulent, with meat, Spanish beans, peas, spices and sugar (more readily available in the United States than Eastern Europe).

Among chasidim, whatever the ingredients, it was a sacrament. Allan Nadler, a professor at Drew University, whose essay, “Holy Kugel: The Sanctification of Ashkenazic Ethnic Foods in Hasidism” (“Studies in Jewish Civilization,” Creighton University Press), is a key resource in this field, writes that Reb Shmelke of Selish “used to immerse himself in the mikvah after the Mussaf service, before the eating of the kugel.” Shlomo Chaim, the rebbe of Koidonov in the 1830s, taught, “I will now reveal to you the secret of the Shabbos foods… they hint at the Ten Holy Sefirot,” the mystical attributes of God. Kugel evoked the Sefirah of Yesod, Nadler explains, “believed to harbor generative, or creative, powers.”

That the kugel is so intimately and specifically associated with Shabbos, even by secular Jews, is evident in the 20th-century American Jewish delicatessens where kugel was an afterthought on the menu. Other items served on Shabbos, such as chicken soup and chopped liver, were widely sold in delicatessens, but not kugel. Although kugel is usually pareve, as easily “milchig” as “fleishig” (dairy or meat, depending on utensils used), kugel is equally ignored in modern kosher pizza stores — the dairy equivalent of the old deli. Kosher pizza emporiums serve everything from sushi to salads, but not kugel.

Ted Merwin, author of the National Jewish Book Award-winning “Pastrami on Rye: An Overstuffed History of the Jewish Deli,” and a professor of Judaic studies at Dickinson College, tells us, “I don’t think kugel was ever one of those indispensable foods that were the sine qua non of the deli experience. No, kugel was a Shabbos thing. There were all kinds of kabbalistic and chasidic explanations,” that survived even when most Jews didn’t remember why. During the week, said Merwin, “people in delis would order a knish,” not a potato kugel, if they wanted a similar taste.

Several New York delis, such as Ben’s or Liebman’s (a Bronx deli surviving since 1953), sell other Jewish foods by their time-honored names (“gefilte,” “kreplach”), but you can’t find lukshen kugel on the menu. In these modern delis, they changed lukshen kugel’s name to the highly assimilated “noodle pudding.” At Liebman’s, this “pudding” is listed under “desserts,” of all things; inconceivable to the Seer.

In recent years there’s been a movement of young Jews attempting to infuse a non-parochial spirituality to the culture of Jewish food. Words such as “sustainability” and “artisanal,” surely quizzical to kugel aficionados, entered the vocabulary. Perhaps because few people ever actually see kugel except on Shabbos, it has eluded both the old deli and the modern politics of food. Like the Israelites, it is a food “that dwells alone.”

And yet, in the defiant social and musical upheaval of the 1960s, kugel found itself on the first album by The Fugs (called by The Village Voice “the Lower East Side’s first true underground band,” and a Jewish one, at that). Ed Sanders, one of the band’s founders, moved into an old kosher butcher shop (keeping the Hebrew letters on the window) on East 10th Street. They recorded a version (“Nothing”) of the wry Yiddish classic “Bulbes” (“Potatoes”). The Yiddish song follows the dull grind of a poor Jew’s menu: “Zuntig (Sunday), bulbes; Montig, bulbes; Dinstik un mitvokh (Tuesday and Wednesday), bulbes … Shabbos — special occasion! — a potato kugeleh! Zuntig, vayter (all over again), potatoes.”

As Ahad Ha’Am explained, more than Jews have kept Shabbos, Shabbos has kept the Jews. Memories of Shabbos — and its mystical, ever-changing kugel — unite Jews in spirit and around tables, from the underground Fugs to the broken hearts after the Shoah. Nadler relates how the Belzer rebbe lived through ghettos, deportations, but his wife and nine children died in Europe. The rebbe found it forever difficult to unpack his memories, but once, when asked to, said, “Thank God. I had kugel to eat every Shabbos.”

Robinson tells us, in Adina Bar-El’s Yiddish translation of “Alice in Wonderland,” the Owl and the Panther are sharing an English pie of meat and gravy. Rather than giving that Wonderland concoction a Yiddish name, Bar-El translates it as “kugel,” translating the fanciful, if not the literal. After all, she writes, “What kind of Jewish Wonderland would it be without kugel?”