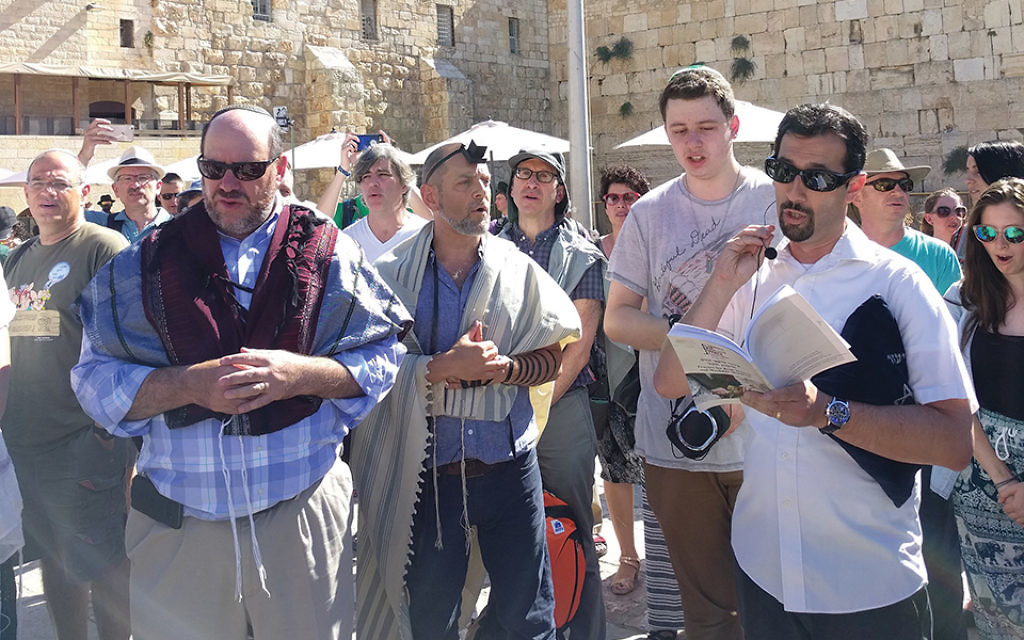 Jerusalem — Frustrated over Israel’s stalled implementation of a compromise to establish a pluralistic prayer plaza at the Western Wall, an alliance of Israeli and North American liberal Jewish groups are vowing to escalate pressure on the ground at the Jerusalem holy site and in the Israeli courts.

In an open letter to Israeli Prime Minister Benjamin Netanyahu this week signed by leaders of Women of the Wall as well as the U.S. and Israeli branches of the Reform and Conservative movements, the allies said they are preparing to petition Israel’s High Court to create the long-fought-for area for pluralist and egalitarian prayer at the plaza.

Though the government and the allies agreed in January to establish an upgraded prayer plaza in the southern section of the Western Wall — known as Robinson’s Arch — the opposition of ultra-Orthodox coalition members has since blocked progress on implementing the deal. Annoyance of the allies deepened last week when Israel’s Attorney General Avichai Mendelblitt ruled against holding mixed, pluralistic prayer in the rear section of the main plaza, which is not partitioned into women’s and men’s sections.

“This situation … is unjust and insulting,” the allies wrote in the letter to the prime minister. In addition to the court petition, the partners vowed to bring supporters to the Western Wall on a regular basis to demonstrate through song, Torah study and to “assert our rights.” The allies also warned of a “wave of incitement and violence” by extremist religious groups in Israel.

The partners sought to make good on that vow already — last Thursday hundreds of supporters turned out at the Western Wall plaza for Women of the Wall’s monthly Rosh Chodesh prayer service followed by a brief ceremony of prayers and sermons by the leaders of the Conservative and Reform movements.

Speaking at the plaza in front of the activists, United Synagogue of Conservative Judaism’s chief executive, Rabbi Steven Wernick, stressed the need to make room at the Western Wall so that all of the religious denominations could “come together in their diversity.”

“What it is that we are looking for is not to make the charedi less charedi,” Rabbi Wernick said. “We are demanding that the government fulfill its promise that the agreement we worked so hard for three years be implemented in full. That’s it.”

About an hour earlier, the Western Wall’s women’s plaza became a din of whistling, singing and catcalls from hecklers while Women of the Wall held their service, which included a bat mitzvah ceremony for a U.S. teenager, with a Torah scroll smuggled past an Israeli police security checkpoint. Worshippers are prohibited from bringing a private Torah scroll into the Western Wall plaza, and women are not given access to the dozens of Torahs available in the men’s section.

When the women unveiled their Torah, the heckling intensified as a handful of opponents called the women “Christians” and shouted “Go to Tel Aviv! Get lost!”

“They are trying to make something out of Judaism that’s not Judaism,” said Sarah, a 75-year-old dual resident of Jerusalem and Montreal who declined to give her last name. “In Judaism, you come, you say your prayers, and you don’t try to disturb things. You don’t try to become a man. They are changing Judaism … They are coming to make a show of it that ‘I’m like a man.’”

At one point, one of the charedi demonstrators ripped a prayer book used by the women’s group in full view of the worshippers on the other side of the mechitza, the partition between the men’s and women’s sections. Liberal leaders pointed to the act as evidence that tensions are rising to the point that they could boil over. They also condemned efforts by ultra-Orthodox activists to put a prayer partition at Robinson’s Arch, where pluralistic prayer is allowed.

“This is a struggle for the future of how Jews — not only Israelis but diaspora Jews as well — see themselves in the eyes of Israel. Are we equal? Are we welcome?” said Shira Pruce, director of public relations at Women of the Wall.

A spokesman for the prime minister’s office said it is still working on finding a “solution” to implement the compromise.

A spokesman for the charedi United Torah Judaism party said the leadership opposes the Western Wall compromise because it gives formal state recognition to the Reform movement. “We oppose that the Women of the Wall come to the Kotel and do anything they want in violation of the rules of the place and religious law,” said Haim Rabinowitz, an aide to Knesset member Yisrael Eichler. “That’s why we ask the police to stop this.”

In June, police arrested Women of the Wall chair Lesley Sachs for bringing a Torah scroll into the plaza. Last week, the group held a bat mitzvah at the women’s section of the plaza without any police arrests, even though one of two Torah scrolls smuggled past the security checks was confiscated.

Avi Mayer, an international spokesman for the Jewish Agency, a partner to the compromise, said the organization wants a “swift resolution” to the dispute. In a statement, he said that a failure to establish a “dignified” prayer space for liberal streams of Judaism could have “far reaching” implications on the relations between diaspora Jewry and Israel.

Despite the apparent success of charedi groups to block implementation of the compromise, the broader trend suggests that the Israeli public is sympathetic to pluralist worship and liberalization of ultra-Orthodox control of religious practice, said a fellow at the Israel Democracy Institute.

“The ultra-Orthodox are in a defensive position to keep their monopoly on issues of Jewish identity,” said Yair Sheleg, head of the institute’s Religion and State Project. “Not only is the secular public against them, but also many liberal Orthodox are against them.”

Back on the Western Wall plaza, however, liberal Jewish leaders said they were preparing for a stepped-up campaign.

“We wanted to bring peace to Jerusalem, and compromised. But the fact that the compromise isn’t implemented by the government forced us to go back to square one, and stand here and demand a third section at the Western Wall,” said Yizhar Hess, the director of the Masorti movement in Israel, which is similar to the Conservative movement in the U.S. “I’m afraid it will escalate.”