At Alenbi Kitchen, the buzzed-about modern Israeli restaurant in Crown Heights, Brooklyn, the hot seat is the chef’s counter. Here you can get a close-up view as the kitchen staff prepare dishes like the deconstructed falafel or oven-roasted cauliflower or fill fluffy white pitas with juicy lamb, amba, tahini and parsley.

“We want to make people feel like they’re sitting in Tel Aviv,” chef Elior Bilbul said. His restaurant, a modern, dimly-lit space decorated with brass furnishings and indoor plants, stands out among the bodegas and dollar stores on Nostrand Avenue. Its part of a recent cluster of upscale kosher dining openings in New York City.

For his seasonal menu, he draws inspiration from the fresh vegetables, meats and herbs he grew up eating. He then gives them a modern twist. “It will look different but the most important thing is that it’ll keep the same flavors and textures, so that when people come into the restaurant they’ll feel like they’re sitting in their aunt’s kitchen or at their grandmother’s house,” he said.

The 33-year-old chef honed his culinary skills working as head chef at Meir Adoni’s Blue Sky in Tel Aviv for six years, and then moved to New York City in 2017 to take advantage of a gap he saw in the fine dining kosher market here. 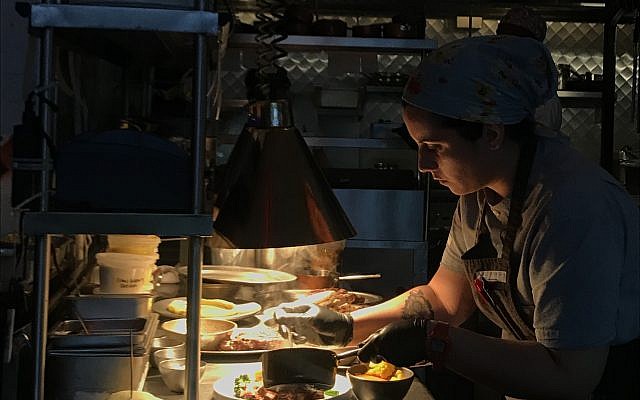 Sixteen months since opening, he says the restaurant is doing well. Inventive dishes like the seared duck breast with queen oyster mushrooms, garlic cream and leek confit draw kosher diners from Long Island, Queens and Manhattan all the way to this gritty street in Brooklyn. Some are even known to travel three or four hours from Baltimore and Philadelphia.

Further uptown in Midtown East, the UN Plaza Grill sits at the base of the 72-story Trump World Tower. Situated across First Avenue from United Nations headquarters, the lunchtime crowd is mostly U.N. diplomats — kosher and non-kosher observing — who come for dry-aged steaks prepared in the restaurant’s private aging room as well as fresh seafood and a full sushi bar.

In a nod to its neighbor across the street, chef Hok Chin (previously of Prime Grill and Reserve Cut) has created a “world cuisine” menu with a mix of globally-inspired dishes like Spanish short rib tacos, French tuna tartare and Asian Sichuan beef.

Since its opening in the summer of 2017, business has been steady with, on average, 150 diners a night in the two-story dining hall as well as private rooms that host corporate parties. Here Qatari and United Arab Emirates officials dine alongside Israeli diplomats. “Sometimes you see all nationalities here in one night,” the restaurant’s general manager Gandhi Kimia said. “You see women with hijabs, Germans, French, Moroccans. The languages that you hear…”

Most customers return for the consistently good service and food. “When you see the plate coming back empty, that’s when you know,” Kimia said. 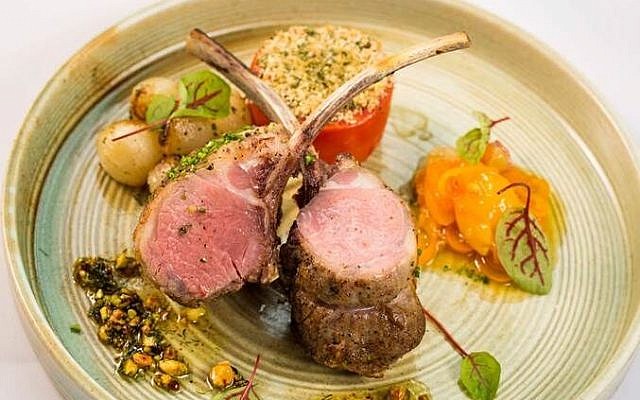 Alenbi and UN Plaza are just two in the growing number of high-end kosher dining options that have popped up in New York City since 2017. Others making a mark are Barnea Bistro and Abaita in Midtown, Noga on the Lower East Side and Boru Boru on the Upper West Side, all of which opened last year. The Wall Street Grill in downtown Manhattan and Arba on the Upper West Side just opened in March and May, respectively.

Shlomo Klein has long been a keen observer of the kosher industry. For the last nine years he and his wife, Shifra, have been publishing kosher food magazines — previously The Joy of Kosher, and more recently Fleishigs, a glossy monthly that is a kind of kosher version of Bon Appetit. He attributes the uptick in fine kosher restaurants to a maturing kosher palate.

It’s not just restaurants, Klein says, but the whole kosher palate that has evolved. This change is evident both in what people cook in their own homes and also what they expect when dining out. “While kosher consumers used to shy away from fancy food or going with expensive cuts of meat, today restaurants can’t keep up, the demand is so high,” Klein said.

“How many people would have eaten steak tartare 12 years ago? It just wasn’t on the radar.” 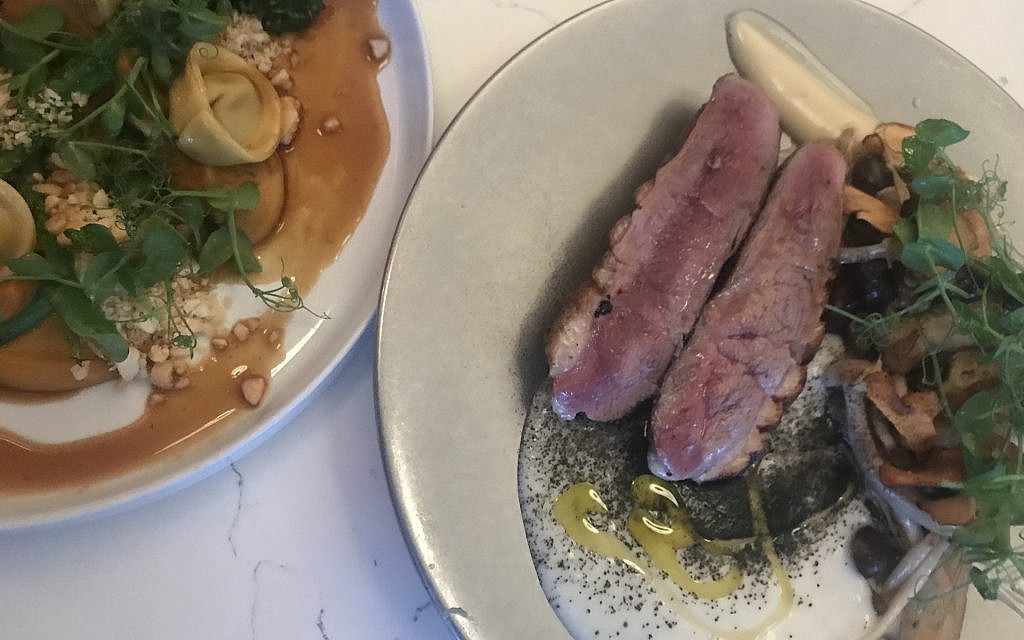 Inventive dishes draw diners from as far as Baltimore and Philadelphia to Alenbi in Crown Heights, Brooklyn. Miriam Groner/JW

Shifra Klein attributes this evolution to a general increase in education around food, particularly on social media, where food is one of the most consistently shared subjects — and from publications like Fleishigs and the preponderance of kosher blogs and food influencers; all attesting to the fact that kosher cooking can be more than just kugel and kishka.

Other industry insiders chalk up the rise to a need for restaurants — particularly in Manhattan — to have tablecloths and waiter service in order to be financially viable in a notoriously difficult kosher industry.

Elan Kornblum is a consultant for kosher restaurants and publishes “Great Kosher Restaurants,” an online and print publication covering the industry. The costs associated with opening any restaurant in Manhattan are prohibitive, he notes, taking into account permits and zoning, construction and staffing. But kosher establishments need to fork out for often pricier kosher ingredients, kosher certification, as well as a mashgiach (kosher supervisor). To make matters more difficult, they also need to be closed on average 100 days of the year (for Shabbat and Jewish holidays), which cuts deeply into revenue.

“Restaurants with $10 or $15 ticket items aren’t opening up; you just can’t make it in Manhattan like that.” 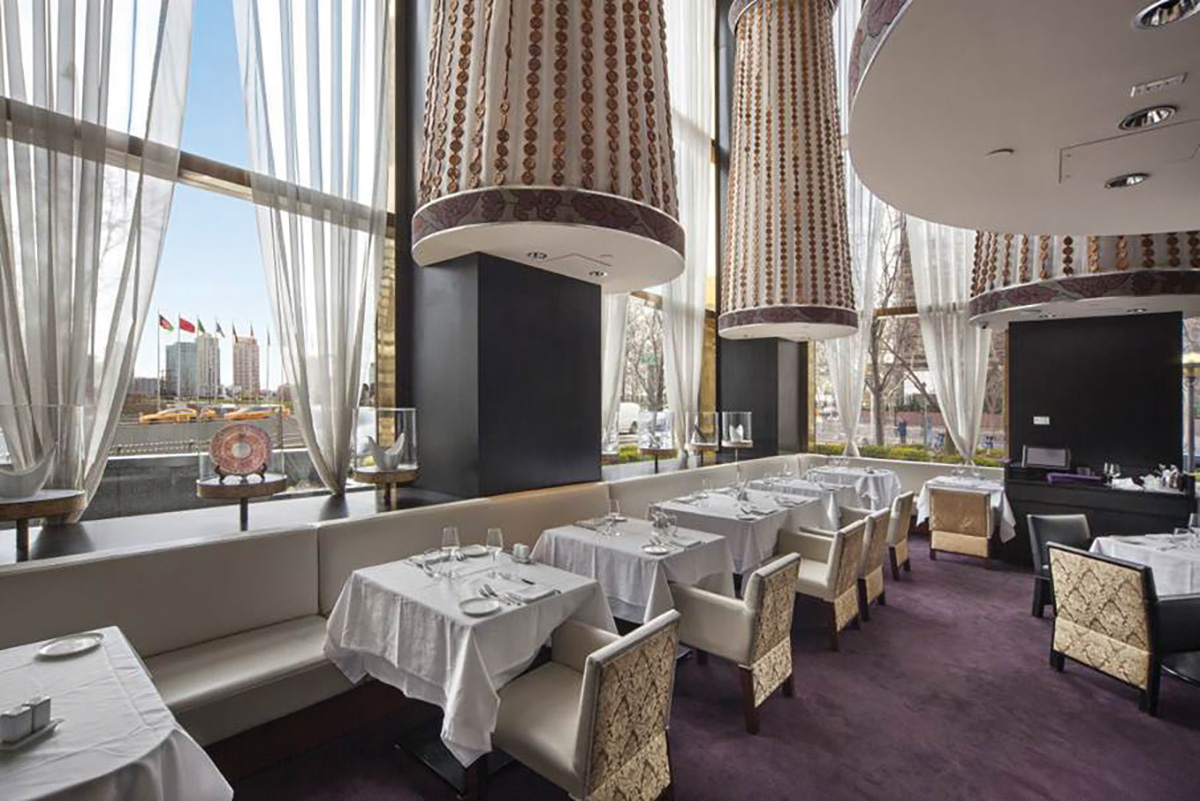 The two-story windows of the dining hall at the UN Plaza Grill overlook UN Headquarters across the street and draws many diplomats who come for their large and varied menu and personal service. Courtesy of UN Plaza Grill

He said that after a recent spate of closings at the end of 2018, there was a concern about the industry’s general viability. But after 15 years observing the kosher market he notes that as much as things change, they stay the same.

He reminds us not to forget establishments like Mike’s Bistro, Le Marais, Abigail’s, Tevere 84 and Colbeh that have been around for years, weathering the tough kosher market and maintaining a consistent fan base.

And while there has been an uptick in the industry, the majority of the legacy and new restaurants are primarily steakhouses or traditional cuisine — few offer a distinctively creative menu.

“If you look at the upscale steakhouses, they all have pulled beef tacos on their menu. They all have sushi,” Shlomo Klein said. “It might be fresh sushi flown in straight from Japan, but it’s sushi. It’s all good food. That’s just obviously the stuff that works in the kosher market.”

There are a few, though, that do stand out, like Alenbi and Boru Boru, a relatively new Asian-driven restaurant that opened on the Upper West Side last year that has developed a reputation for its ramen, pho and bao buns. 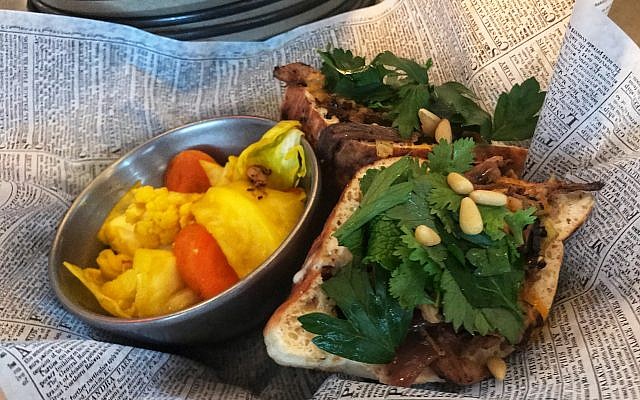 Interestingly, aside from these few restaurants, most of the remarkable innovation is happening in the more casual dining scene. Places like the Izzy’s trio in Crown Heights that sports the wildly popular Izzy’s Smokehouse, Izzy’s Taqueria and the soon-to-open Izzy’s Fried Chicken. Others include gourmet — but still casual — burger joints like Boeuf and Bun or Upside Craft, both in Brooklyn.

Alenbi’s owners, too, are now venturing into the casual dining scene with a new fast food eatery that will open in Crown Heights this summer and serve Israeli street food.

Meanwhile, Alenbi’s 65-seat restaurant and bar has even started to attract some non-kosher diners, mostly Jewish or Israeli, who have heard about dishes like the filet mignon with chestnut cream and stuffed tortellini.

Bilbul, who doesn’t keep a kosher diet himself, predicts that in 10 years kosher dining will be on par with non-kosher. “It will happen. It takes time … but in the end it will happen.”