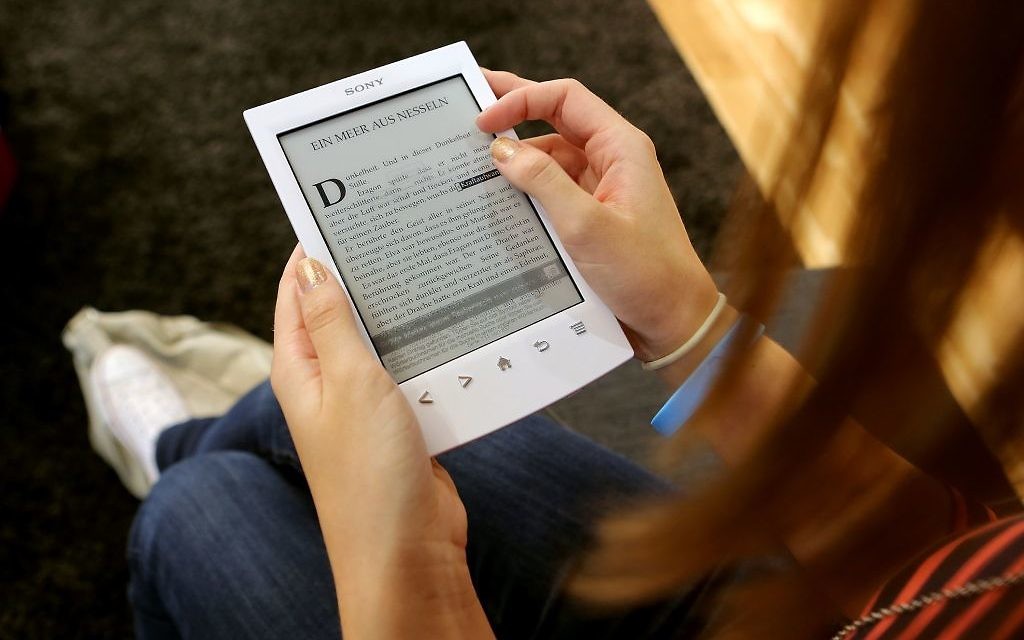 Ask most rabbis what their number one recommendation is for “saving” the Jewish future and they will point to Jewish literacy. Helping young Jews become more literate about Jewish history, culture and religion is a top priority for Jewish leaders on college campuses. The way to do this is by getting them to read books about a whole host of Jewish themes and topics. Rather than telling college students to read a history of the Jewish people and having them feel like they have one more 4-credit course to take, innovative Jewish educators are envisioning new ways to encourage Jewish literacy. I was impressed when I learned of a new program being implemented at Brown University to get college students excited about reading books with Jewish themes.

Rabbi Mordechai Rackover, the associate university chaplain for the Jewish community at Brown, shared the intent of this new program that looks to an e-reader to increase the level of Jewish literacy on campus. Called “Kindle Your Judaism,” this pilot program is being implemented through the university’s Chaplain’s Offices and Hillel with funding from a private foundation. “Kindle Your Judaism” currently has 12 students involved who were recruited and offered an Amazon Kindle and a stipend. They will meet 12-15 times and discuss the books they are reading on their Kindles. These books include Sacred Trash, Man’s Search for Meaning, Six Days of War, To the End of the Land and The Amazing Adventures of Kavalier and Clay. Of the 12 participants, Rackover told me that about a third of these 12 students are already regularly engaged with Hillel. One is not Jewish. Some went to Jewish camp and attended Birthright Israel. Some of them just want to further their Jewish literacy foundation.

Rackover hopes the “Kindle Your Judaism” initiative at Brown University will soon be replicated at other universities throughout North America. He discussed the impetus for the project as well as what the intended outcomes will be:

How was this program conceived?
MR: This program was created through collaborative thinking between students and myself. Upon our return from a Birthright trip a few years ago we wanted to create a dynamic program that would encourage students to learn. We didn’t feel bound to traditional Jewish learning, Bible or Talmud or Philosophy. Students told me that though they read a lot for school, they didn’t have a chance to do “pleasure reading” and they thought this would be a good incentive. We looked at the successful methodology of an Orthodox campus outreach group and realized that we could use the same method but offer a much more diverse curriculum with no over-arching sense that there was a kiruv (outreach) motive.

What makes this project desirable for the 21st century college student?
MR: “Kindle Your Judaism” hits the sweet spot between cool and education. We read. We meet weekly and discuss our readings. The conversation, which obviously depends upon the readings, covers a vast territory. We began with a book about the Cairo Geniza, “Sacred Trash” by Adina Hoffman and Peter Cole. We learned about Jewish languages, ancient semitic languages, Jewish exiles and migrations, medieval poetry by women, community structures, Karaism, tefillin, kosher slaughter, and the list goes on and on. We’ve since moved on to “Man’s Search for Meaning” by Victor Frankl and through it are taking an inside look at the Holocaust. We’ve asked questions about camps, crematoria, disease and cure and much much more.

We plan to move into Israel history and then contemporary fiction with a book set in Israel. A sort of virtual ‘walking of the land.’ If we have enough time we’ll approach the immigrant experience and the impact of Jews on mid-twentieth century American culture and that legacy today. When all is said and done we won’t have experts. We won’t have perfectly literate participants. We’ll have people with more questions and relationships with others who can help them find answers.

How do you plan to make this project scalable?
MR: This program is relatively inexpensive and, like the wildly successful PJ Library, is scalable. E-books can be sent without postage. All it takes is an email address. Convening can be with or without stipends; virtual or real; food or drink or nothing. So many people have tablets and e-readers that this program could be undertaken in communities across the globe with costs as low as the ebooks that are chosen on a monthly basis. Programs could be tailored to a particular group of people who need not even inhabit the same city. Doctors or lawyers or stay-at-home dads or moms across North America could read and join a weekly virtual salon with or without a professional facilitator within their fields or outside of them.

Why are college students the ideal initial target group for this and how will you bolster the Birthright Israel experience?
MR: Already in the mode of learners, students could be engaged with this program on a regional or national basis. Imagine if Israel groups created reading lists and purchased electronic books for students. The groups could provide the underpinnings for appropriate debate and conversation that would enrich all people on campus. Rather than giving participants their deposit back, what if we gave them the option to chose a Amazon Kindle stacked with books? This would be particularly effective on campuses that have engagement workers who could read along with individuals or groups. Preparation for the trip could also be enriched for those who so chose. Israelis could also be provided with Amazon Kindles so there was a common cultural currency prior to the trip.

Will it be possible to replicate this project with Jewish teens so they get a pre-loaded Kindle even before they get to campus?
MR: Rabbis, rather than giving bat and bar mitzvahs kiddush cups and siddurim (that may never be used again), can give Amazon Kindles. (On Shabbat or after, depending on the community’s standards concerning electricity on Shabbat). The Amazon Kindle can be embedded with a contract – I’m giving this to you to use and enjoy. It has books in it that we’d like you to read now and then.

What else is on the horizon?
MR: We are considering a cross-platform app that connects to Facebook could allow for broad discussions amongst vast groups of people. Should Amazon open up their API we could imagine a time where commenting while reading would be possible and chats could ensue. The possibilities are limitless when we consider multimedia – graphics, music, video – to enhance books and bring more and more of our culture alive.

Rackover says, “Jewish literacy is not the panacea for all the challenges our people face. But it is a means by which we can inculcate values and enrich our people’s cultural competency.” Rather than simply encouraging college students to come use the library at Hillel, offering a book discussion group or providing them with a few free copies of hardcover books, this program takes advantage of new technology. Providing complimentary e-reader devices to the students will be an enticing way to get them to explore the vast world of Jewish books.


Rabbi Jason Miller is an entrepreneurial rabbi and a “Rabbi Without Borders”. He is the technology expert for The Jewish Week. Miller is also president of Access Computer Technology, a computer tech support and social media marketing company based in Michigan. Follow him on Twitter @RabbiJason and Facebook.