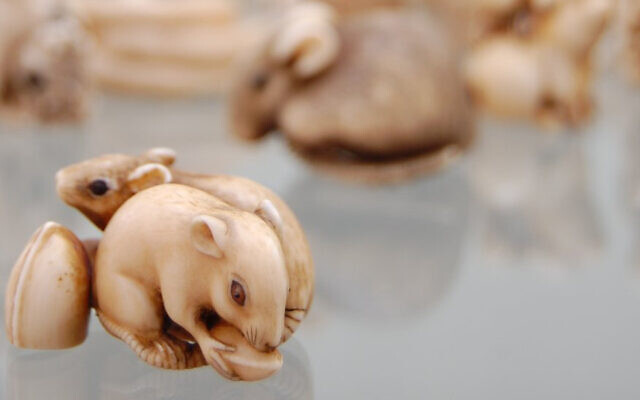 Various netsuke figurines from the de Waal Family Collection are on display at the Jewish Museum in Manhattan as part of the exhibit, “The Hare with Amber Eyes,” which traces the rise and fall of the Jewish Ephrussi family. (Jewish Museum)

SCHOOL RULES: In a victory for yeshivas and other parochial schools, a New York State Supreme Court judge ruled that a school district must provide transportation to non-public school students even on days when the public schools are closed.

HATE WATCH: NYPD’s Hate Crimes Task Force is looking for a man who snatched the yarmulke off the head of a Jewish man Thursday in Greenwich Village, then yelled an anti-Semitic statement at him. (Daily News)

THE THINGS THEY CARRIED: A new exhibit at the Jewish Museum presents the art and artifacts that inspired Edmund de Waal’s bestseller “The Hare with Amber Eyes: A Hidden Inheritance.” (Jewish Week via JTA)

IN PRODUCTION: “Fleishman Is in Trouble,” what author Taffy Brodesser-Akner calls “a book about a Jew in New York,” is being adapted for TV in a production starring Jewish actors Jesse Eisenberg and Lizzy Caplan. (JTA)

IN IT TO WIN IT: Nancy Josephs Edelman, an English teacher at SAR High School in Riverdale, will be a contestant on “Jeopardy!” The episode airs Nov. 25 at 7:00 p.m. on ABC 7.

RAISE YOUR GLASS: Glassblower Andi Kovel, who grew up in Rye, N.Y., will return to Netflix’s competition show “Blown Away” for a Christmas special that begins airing tonight. (Alma)

Jacob learns a lesson this week that we can take into Thanksgiving, writes Rabbi Adina Lewittes: Gratitude means appreciating only as much as we need from the world, no more and no less.

Israeli actress Gal Gadot, star of “Wonder Woman” and “Red Notice,” just launched a new business. What is it called and what does it do?

Deborah Lipstadt, Dorot Professor of Modern Jewish History and Holocaust Studies at Emory University and Ira Forman, the former U.S. Special Envoy to Monitor and Combat Anti-Semitisman, will discuss the state of antisemitism today, how it has evolved since Forman’s tenure, and the most effective strategies for fighting back. Co-presented by the Museum of Jewish Heritage and New York Board of Rabbis. Register here. Sunday, 3:00 p.m.