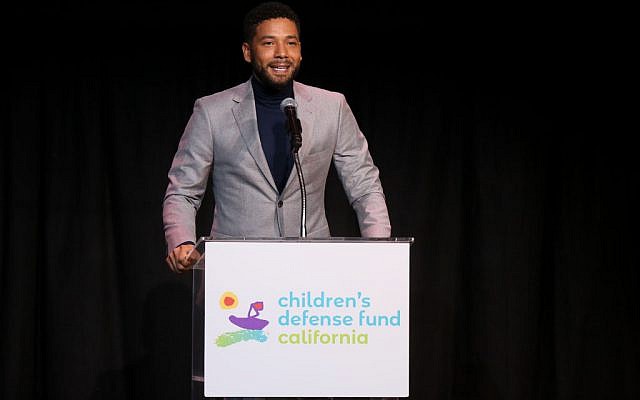 (JTA) — Jussie Smollett was charged with a felony for making a false police report in which the “Empire” actor said he was the victim of a hate attack last month in Chicago.

Smollett, who is black, Jewish and gay, was charged Wednesday with felony disorder conduct, which carries a prison sentence of up to three years and could require him to repay police for the cost of the investigation. That could run to hundreds of thousands of dollars.

Smollett was taken into police custody on Thursday morning in Chicago.

Fox Entertainment has said it is not cutting Smollett’s openly gay character, Jamal Lyon, on “Empire.” Deadline Hollywood reported Wednesday, however, that there are rumors the character’s scenes have been trimmed or cut in the episodes being filmed and the network is considering suspending Smollett from the show or putting him on some form of leave.

Police believe Smollett paid two Nigerian brothers to stage the Jan. 29 attack in downtown Chicago. The brothers, one who appears in “Empire,” testified Wednesday before a grand jury.

Smollett has denied involvement in the assault in which he told police that two men “gained his attention by yelling out racial and homophobic slurs towards him” before attacking, pouring an “unknown chemical substance” on him and wrapping a rope around his neck. They said “This is MAGA country” as they fled, he also told police.