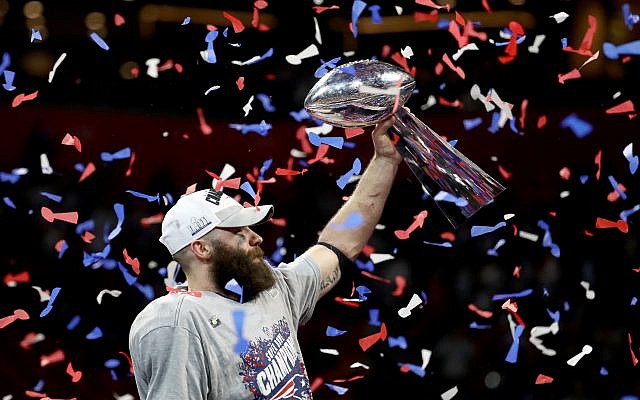 ATLANTA, GEORGIA - FEBRUARY 03: Julian Edelman #11 of the New England Patriots celebrates with the Vince Lombardi Trophy after his teams 13-3 win over the Los Angeles Rams during Super Bowl LIII at Mercedes-Benz Stadium on February 03, 2019 in Atlanta, Georgia. (Photo by Al Bello/Getty Images)

Super Bowl LIII has been considered one of the most boring super bowls in recent memory. In a matchup pitting two of the NFL’s top scoring offensive teams, The Los Angeles Rams and The New England Patriots, the final score was 13-3 with the only touchdown scored by the Patriots. While there was a dearth of offensive plays in this game, Julian Edelman, a wide receiver on the Patriots, made strides as an offensive player on the field, despite not scoring a touchdown in the game. His successful offensive plays won him the title of MVP during Super Bowl LIII.

Julian Edelman’s story begins in Redwood City, Calif. where he was born on May 22, 1986, to Frank and Angela Edelman. In the neighboring town of Woodside, where Edelman attended school, he became the starting quarterback for the Woodside High School. Edelman’s role as a quarterback helped the team’s overall success. As a senior, he led the team to a 13-0 record. Overall, Edelman finished high school throwing for over 2,000 yards and 29 touchdowns. Various colleges noticed Edelman’s abilities as a high school student, and after high school, he spent a year at the College of San Mateo, playing quarterback for their football team. He later transferred to Kent State University where he started for another three years and threw for close to 5,000 yards and 30 touchdowns. Edelman achieved massive success as a quarterback, regardless of being considered short for an NFL quarterback (his height is five-foot-ten). Julian Edelman was drafted as the 27th pick of the 7th round in the 2009 NFL Draft by the New England Patriots. Once on the Patriots, he was switched to the position of a wide receiver to fill in for the injured Wes Welker. For the next four seasons, Edelman was primarily used as a punt returner, returning three kicks for touchdowns and gaining over 1,200 yards on returns.

Following the 2012 season, however, Welker left New England to join Peyton Manning on the Denver Broncos, and Edelman became an official wide receiver. Edelman flourished in his new position, catching 105 passes for 1,056 yards in 2013, making him the third player on the Patriots to catch over 100 passes. The following season he produced similar results, catching 92 passes for 972 yards. He also performed superbly in the postseason, which included beating out all receivers in receiving yards in the super bowl and catching the Patriots go-ahead touchdown. Edelman’s abilities to dominate as a wide receiver secured the Patriots a victory in Super Bowl LI when they were down 28-3. Edelman succeeded in what has been known as his famous circus catch in the third quarter, which became the catalyst for the Patriots to make a comeback and win the super bowl in overtime. That catch went on the cover of Sports Illustrated and is widely considered to be one of the greatest catches in Super Bowl history. Edelman’s skills as a wide receiver were on display during Super Bowl LIII two weeks ago as well, where he caught 10 passes on 12 targets for 141 yards, which won him the title of the Super Bowl MVP.

Throughout his career, Edelman has maintained his connection to his Jewish heritage. Although he was born only to a Jewish father and was raised in a Christian household, as Edelman grew older, he began to feel a stronger attachment to the Jewish faith. Edelman has publicly vocalized this connection to Judaism; during an interview on the NFL Network in 2013, when asked for some “good Christmas answers,”  Edelman responded, “Well, I’m Jewish, but I’ll try to keep it to Hanukkah… even though Hanukkah’s over.” His public connection with Judaism grew from that point, as he wore an Israeli-American flag pin during a game against the Broncos in 2014, as well as an Israeli flag hat this past season to demonstrate support for the victims of The Tree of Life Synagogue shooting. To further demonstrate his support, he wore custom designed cleats with the hashtag #strongerthenhate during a game against the Pittsburgh Steelers this past December.

Julian Edelman’s demonstration of support for Jews and Israel is a powerful form of resistance to the NFL, which has been known to be hostile to pro-Israel views, that sends a message to those who wish to see the downfall of the State of Israel and the Jewish people—we won’t stay silent.