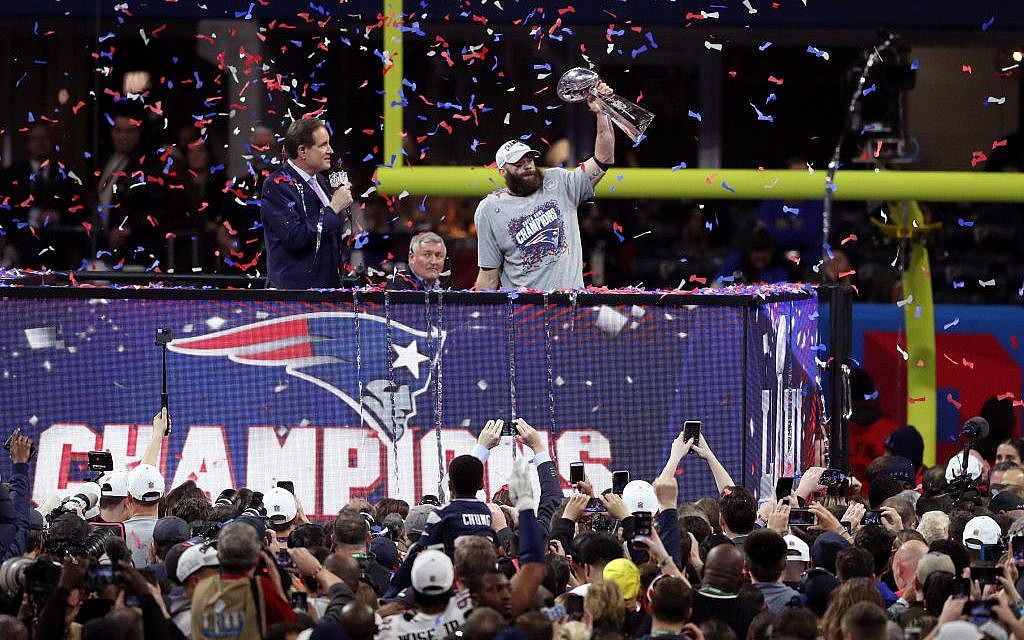 Twenty years ago, Rich Cohen wrote “Tough Jews: Fathers, Sons, and Gangster Dreams,” about Meyer Lansky, Bugsy Siegel and their certain brand of brains (their own) and brawn (not their own).

With Popeye-size biceps, a bushy “mountain man” beard and black, anti-glare grease smeared under his eyes, the undersized Edelman (he’s 5-10) was dubbed by quarterback Tom Brady earlier in the playoff as “mentally and physically as tough as anyone who has played for the Patriots.” He caught 10 catches for 141 yards in the Patriots 13-3 victory of the Los Angeles Rams.

Edelman, 32, who has embraced his Jewishness more fully in recent years, was cheered halfway across the world in Israel. “The first Jewish Super Bowl MVP,” the Jerusalem Post declared. A “gridiron Maccabee,” Ron Dermer, Israel’s ambassador to the United State, wrote of Edelman in a congratulatory tweet a few hours after the game, reaching back to some tough Jews of yesteryear. 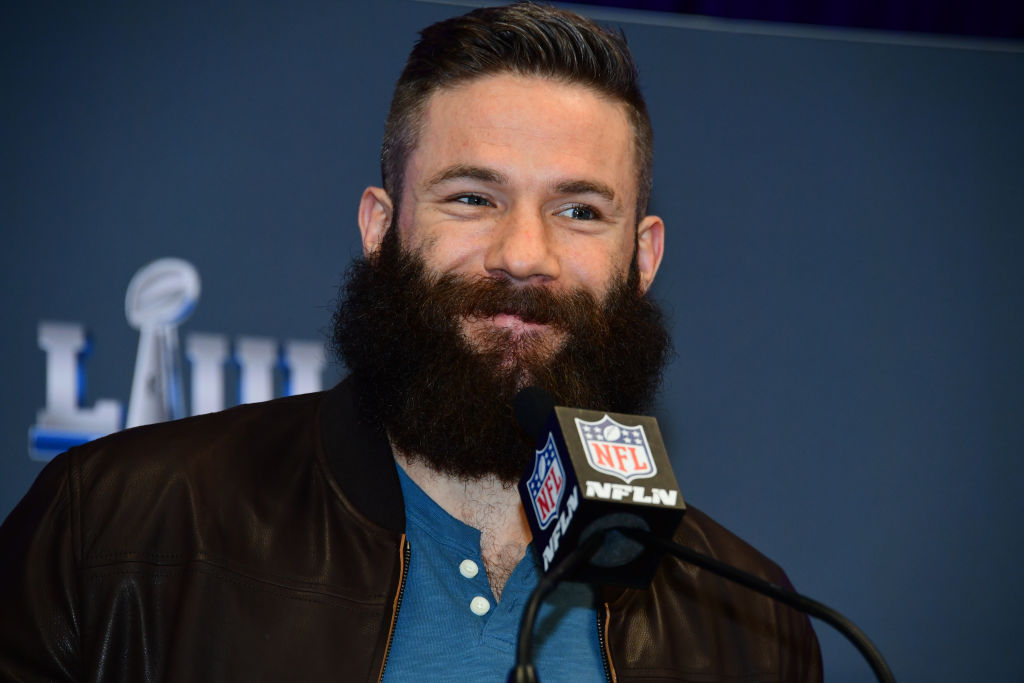 Julian Edelman of the New England Patriots is interviewed at a press conference naming him MVP of Super Bowl LIII on February 4, 2019 at the Georgia World Congress Center in Atlanta, Georgia. Scott Cunningham/Getty Images

While most members of the professions-oriented Jewish community pay less attention to Jewish athletes’ religious identity than in past years, when success in sports was one measure of an immigrant community “making it” in America, Edelman stands out for two reasons, said Jeffrey Gurock, a professor of American Jewish history at Yeshiva University and an expert on Jews in sports.

Edelman is an exceptionally talented athlete, and he wears his Jewishness on his sleeve – or at least on his shoes.

Last year, after the killing of 11 worshippers during Shabbat morning services at Pittsburgh’s Tree of Life synagogue, he tweeted his sympathy and the names of the victims, wore an Israeli baseball cap on the sidelines, and special cleats with Hebrew on them during a game to honor the shooting victims.

“He’s not only Jewish, he acts Jewishly,” Gurock said. “We can be very proud of this guy. His game is very cerebral – he’s not the biggest guy or the swiftest guy. It’s been a long time since anyone of that caliber who happened to be Jewish succeeded in football.”

Edelman, a native of Redwood City, Calif., who played college ball at Kent State University, is typical of his generation, born in an interfaith family (Jewish on his father’s side) and raised with no religious upbringing.

Early in his decade-long NFL career he deflected questions about his religious affiliation but began publicly identifying as Jewish in his breakout 2013 season. In subsequent years he went on a Birthright Israel-style trip to the Jewish state, wore an Israeli flag pin, tweeted about Jewish holidays, and wrote a children’s book that includes references to Zionism founder Theodor Herzl.

Edelman is, Haaretz wrote this week, “the most outwardly Jewish NFL player” among the handful in the league this year; one of them is his teammate Nate Ebner. (The Patriots’ owner, Robert Kraft, is also Jewish, a prominent philanthropic donor to many Jewish causes, including a football field in Jerusalem that bears his family’s name. He recently was named recipient of the $1 million Genesis Prize.) 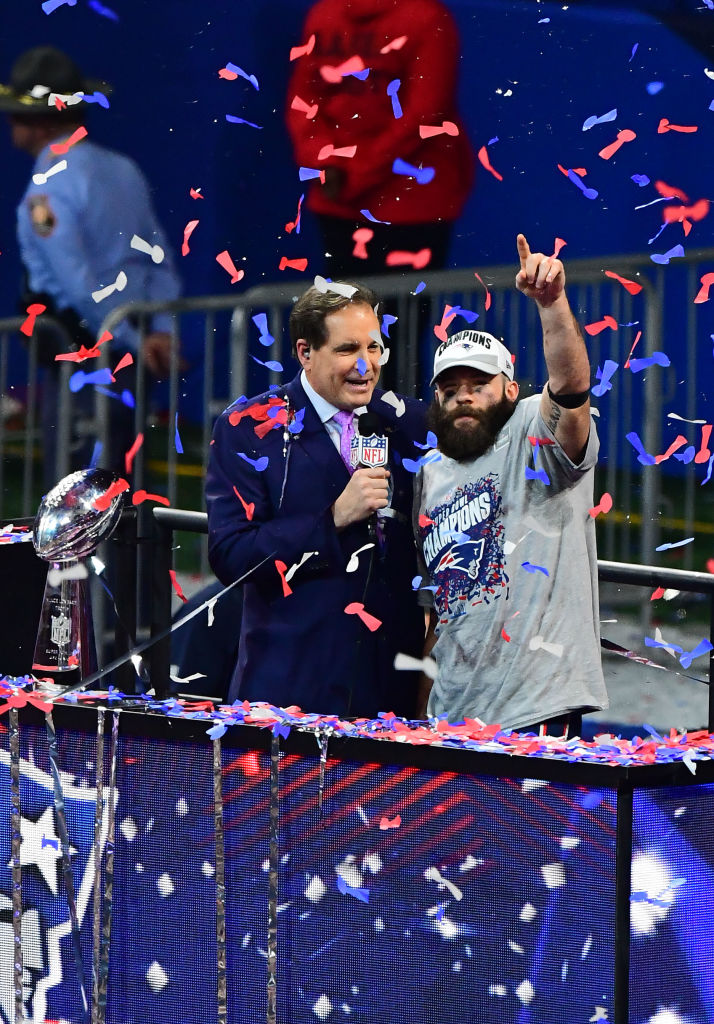 Julian Edelman #11 of the New England Patriots is interviewed after his teams 13-3 win over the Los Angeles Rams during Super Bowl LIII at Mercedes-Benz Stadium on February 03, 2019 in Atlanta, Georgia. Scott Cunningham/Getty Images

After serving a four-game suspension at the start of this season for violating the NFL’s policy on performance-enhancing substances, he finished the regular season with 74 catches for 850 yards.

A clutch performer in the post-season playoffs, Edelman, who was out for the season last year with a torn knee ligament, has made the second-most playoff receptions of all time.

Several Jewish publications this week asked if Edelman is the best Jewish NFLer ever, a group that includes Sid Luckman, a superstar quarterback in the 1940s, and Ron Mix, an offensive lineman in the Hall of Fame.

Edelman ranks with Los Angeles Dodgers pitchers Larry Sherry and Sandy Koufax, MVP winners in 1959 and 1963 and 1965 respectively, as the only Jewish athletes to win a playoff game or series MVP award in North America’s four major team sports.