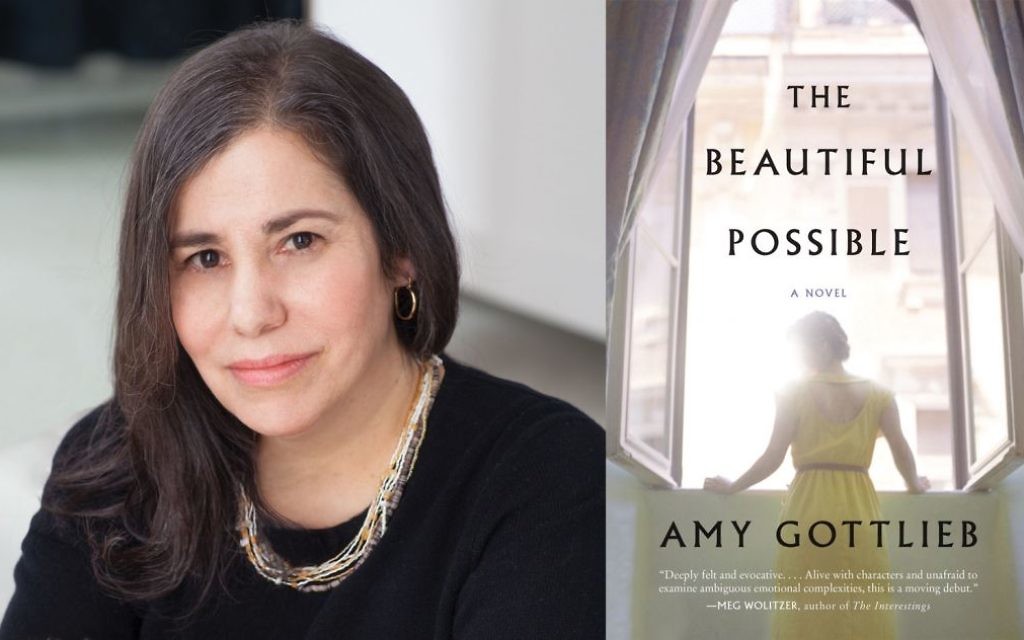 Amy Gottlieb’s debut novel, “The Beautiful Possible” (Harper), is one of the most Jewish of stories, if one considers novelist Rebecca Goldstein’s definition of a Jewish book as one in which Judaism matters on the page. In a style that feels natural, Gottlieb weaves Jewish wisdom, texts and storytelling into narrative and dialogue; many sentences have the cadences of prayer.

The novel opens with a horrific scene in 1938 Berlin, and the lone survivor of a Nazi murder scene boards a ship to Shanghai. The young man, Walter Westhaus, instead gets off in Bombay, following a stranger who suggests he’ll be better off in India. The stranger turns out be a scholar, and, after a few years, he convinces Walter — who once wrote a paper on the Song of Songs, which was translated into English and published — to come with him to New York and study with the rabbis of the Jewish Theological Seminary.

The scene then shifts to JTS in the 1950s, where Walter becomes the reluctant but perceptive study partner of a star rabbinic student named Sol Kerem in his final year. They envelop themselves in “the words that carry them to ancient study halls, steamy bathhouses of men and Hebrew letters dancing together in an eternal tango,” as Gottlieb writes. Sol, his fiancée Rosalie Wachs and Walter become connected in powerful ways that influence the rest of their lives, even as Sol and Rosalie marry and found and nurture a shul in Westchester, and Walter pursues an academic path in Berkeley, Calif.

There are rebbetzins who stand casually at a husband’s side, whispering the names of congregants into his ear, and letting him know who lost a parent or had a hip replacement. And others who run sisterhood meetings and nursery schools, while some rabbis’ wives (and now, husbands) do none of the above. Rosalie is the kind of rebbetzin who, at a different time, might have been a rabbi herself. She studied at the side of her father, a rabbi with chasidic leanings, and in the suburban shul of the late 1960s, she writes the High Holiday sermons her husband delivers. At a moment when her rabbinic husband was poised to lose his job, he turned to her, and she — working with Walter — found the words he needed to reach the hearts of congregants.

The book is framed with a book within the book written by Rosalie’s daughter, a rabbi, who says, “Our house was a palace of stories — the ancient ones in the books, the love stories in the songs, the secrets my mother whispered into the phone late at night. At times, I would drift off to sleep and imagine how all the stories were part of one great book that hummed with sadness and longing.”

It’s the story of a past era at JTS, when Rabbi Abraham Joshua Heschel was teaching there, and it’s also a story of faith, losing faith, words, secrets, inherited traditions, holiness, marriage and love. Conversations often lead to unresolved questions. To say more of the plot, which spans 70 years, from the U.S. to Israel and India, would spoil the experience of reading.

For 14 years, Gottlieb had a front-row seat to goings-on at JTS. She was a writer with a day job, she says, and she served as director of publications at the Rabbinical Assembly in the years when she began the novel. Many of the JTS old-timers would stop by her office and regale her with stories of an earlier time, and for her, “there was magic in the air,” as she’d hear about Rabbi Heschel and others. Those stories inspired part of the novel.

The seed of the book was the character of Walter. While researching narratives of German Jews who made their way to India during the War, she found the true story of one man who spent time in an ashram, and she knew that would be Walter’s story. She finds parallels between the writings of Indian poet Rabindranath Tagore and Rabbi Heschel.

She was also inspired by the Long Island synagogue of her childhood, which her parents helped to found. “It wasn’t particularly enlightened,” she says, but it was very tender and sweet.”

Additionally, the novel took shape through her own study of chasidic texts at Drisha Institute, and other Jewish study. Another character readers might recognize is Madame Sylvie, who resembles the late, well-known Jerusalem kabbalist Colette Aboulker-Muscat.

Gottlieb, who teaches writing at the College of St. Vincent in Riverdale, where she lives, and during summers at Kenyon College, where she has worked with members of the clergy on spiritual writing, says, “The process of writing made me think of the connection between faith and storytelling — it takes faith to tell a story, to make a leap into the imagination. The world of faith is an imaginative project.” n

They envelop themselves in ‘the words that carry them to ancient study halls, steamy bathhouses of men and Hebrew letters dancing together in an eternal tango,’ as Gottlieb writes.