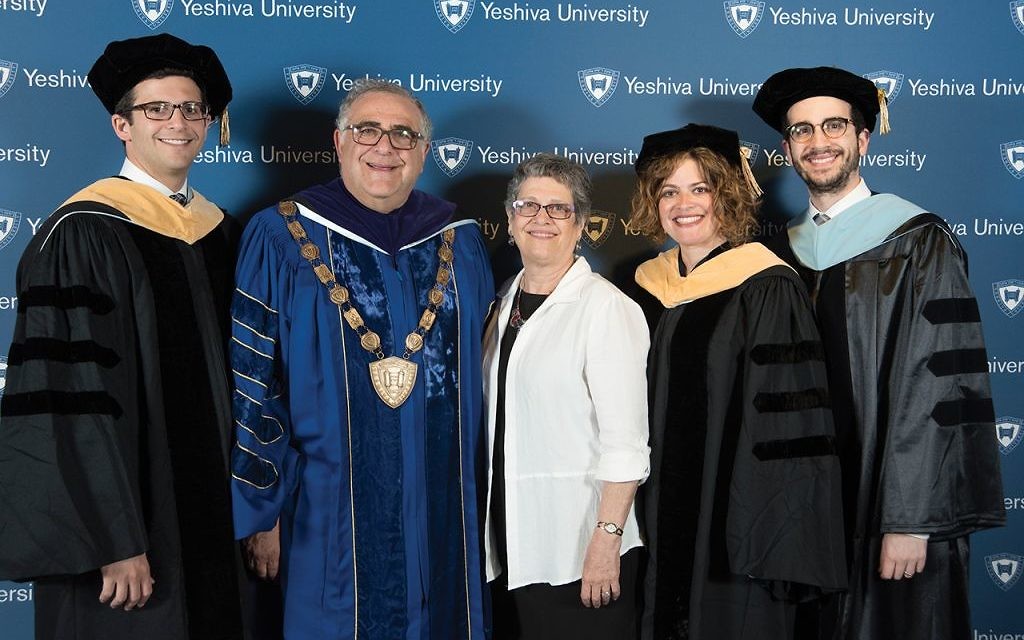 ‘Yes, this is a mazel tov, a Guinness Book of World Records,” said Richard Joel, president of Yeshiva University. “Has there ever been a university president who’s given three doctorates to three of his children at the same graduation?” The three are son Noam, from YU’s Ferkauf Graduate School of Psychology, and daughter Penny and son Avery from YU’s Azrieli School of Jewish Education. Joel has three other children with multiple degrees, working as a teacher, an engineer, and a pop star (a Maccabeat).

Noam, 31, now doctor of clinical psychiatry, said, “It’s beyond a kick,” for the Joel family. “It’s very meaningful. My father doesn’t take it for granted and that gives it more meaning to me. You can see it on his face, there on the stage, when he says: ‘Congratulations, you’re now a doctor.’”

Avery, 38, flew in from Cleveland where he’s the high school principal of the Fuchs Mizrachi School. Anticipating graduation, he says of his father, “I’m hoping it provides him with a lot of nachas. That’s really what I hope. For me, it’s special just to follow in his footsteps. We’re really proud of our father for all he’s done for Yeshiva University. This is a small way we can give something back to him.

“He’s committed his life to the future of the Jewish people, and I’m following very directly by receiving my degree from him, and being able to actualize it in my life.” Avery also has ordination from YU’s rabbinical school and a master’s in public administration from New York University. He also appreciates sharing the day with his siblings. “Not many people have had this opportunity.”

Penny, 41, made aliyah but returned to New York for her doctorate, and like her brothers understands “how meaningful it is” for their father and brothers. While in New York she worked at Westchester Hebrew High School and with a teen program building houses for people displaced by Hurricane Sandy. Now living in Jerusalem, she anticipates working in “experiential education,” outside the classroom.

Father Joel noted that “this is a family affair,” not just for the Joels but for “all of us” at Yeshiva’s graduation when more than 2,000 degrees were conferred. Yes, YU has been weathering financial difficulties, but he emphasized that education and graduations are at the root of what Yeshiva is about: “This is what we do, strengthening this family, this wonderful sometimes dysfunctional family of Yiddishkeit.”

He acknowledged, “We’ve had unbelievable opportunity. It was an adventure we took together, and thank God my kids took the right things from it. In the autumn of my presidency, there’s a real shlaymut [a wholeness] to this. It all comes together, another reason for us to be grateful to Yeshiva University.”