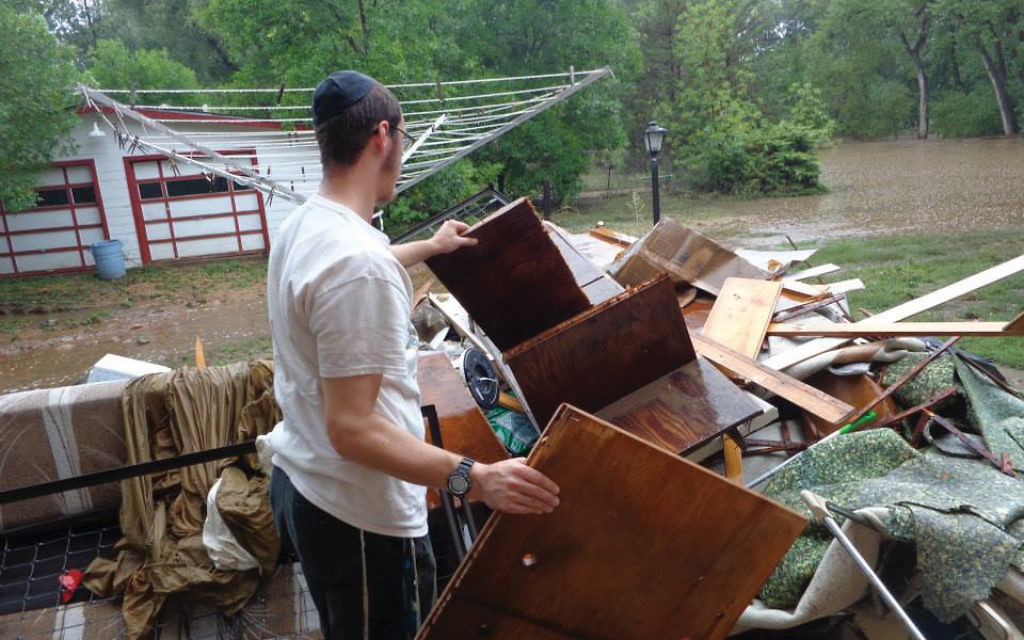 Denver — In the most famous scene from the Book of Jonah, read each year on Yom Kippur, a raging storm sweeps Jonah the prophet overboard and into the sea, where a whale swallows him.

So it was perhaps fitting that it was just before Yom Kippur when a flood of historical, if not biblical, proportions swallowed Boulder, Colo., and surrounding areas, displacing families, damaging synagogues and threatening services on the holiest day of the Jewish year.

Days of heavy rain across Colorado’s Front Range left eight people confirmed dead as of Monday evening and hundreds more unaccounted for. The New York-based Jewish Federations of North America provided $50,000 in emergency aid to help Colorado flooding victims and opened an online donation fund. It is working with the Allied Jewish Federation of Colorado, which is taking the lead in assessing needs and distributing funds and supplies.

“Our hearts and prayers go out to the people of Colorado,” said Michael Siegal, chair of the JFNA board of trustees.

Of the synagogues affected by the flooding, Orthodox Boulder Aish Kodesh hit the Internet first, sending a mass e-mail to 500 residents announcing that heavy rains and flooding had destroyed the tent it had prepared for the holiday. The e-mail offered alternative locations for services, including hard-hit Chabad centers as well as Denver synagogues out of harm’s way.

Elon Bar-Evan, executive director of Boulder Aish Kodesh, said the tent and parking lot were underwater and that many prayer books intended for the services were ruined.

“Our Yom Kippur services are scheduled elsewhere, but it is unclear whether we will be able to have them there at this point due to flooded roads and so forth,” Rabbi Soloway said. “It’s a mess.”

At Har HaShem, Boulder’s major Reform synagogue, the power was out.

“The lower level of the main building was under four feet of water,” said communications and membership director Ellen Kowitt, reached at her home in Erie, Colo.

Because Kowitt often works from home, she was able to update the website. Before the server collapsed, Rose wrote an e-mail to the congregation:

“The Talmud teaches that rain is a sign of blessing. That might sound questionable right now. Whether we can turn this into a blessing remains to be seen . . . I believe in us.”

Chany Scheiner of Chabad of Boulder described a scene of utter chaos at the synagogue, which is attached to the side of her home. “CU and other places closed on Thursday,” she said. “My husband Rabbi Pesach Scheiner and I thought they might be making a big deal out of nothing.”

When three rooms filled with water later that night, they knew it was serious. “There was a flood in front of our house and the backyard was a nice-sized swimming pool,” she said.

The Scheiners and their children were evacuated. Neighbors convinced them to leave. “We went in their car,” Scheiner said. “It was like the parting of the Red Sea.”

When the Scheiners returned to assess the damage, they found a few inches of brown water in the synagogue. The family got on their knees to clean the small worship space and then tackled the house.

Reconstructionist Beth Evergreen, located in the foothills just outside Denver, nearly shut its doors on the evening of Yom Kippur due to flooding.

According to Rabbi Jamie Arnold, the road cutting through Evergreen, in the mountains west of Denver, was closed all day Friday, which meant congregants coming from Conifer would have to tackle a circuitous route from the opposite direction. Only about 30 to 40 “hard-core” congregants made it to Beth Evergreen for Kol Nidre, Rabbi Arnold said, and about 300 attended Yom Kippur services the next day, when the clouds dissipated long enough to allow for safe travel.

“I didn’t change my sermon substantially,” Rabbi Arnold said. “I included prayers for healing and read names for those unable to say Kaddish for their loved ones. But my sermon was about the function of community; how it provides sanctuary. I think that said it all.”

Meanwhile, Rabbi Yisroel Wilhelm of Chabad at the University of Colorado was receiving a call every minute and a stream of e-mails Friday morning.

“We’ve already cleaned up our mess — only a few inches in the shul,” Rabbi Wilhelm said. “But it’s pretty intense.”

Students contacted Rabbi Wilhelm to find out where they could attend services in Boulder. Some, unable to get home to Denver, also called him. Others trapped in inaccessible areas requested basic supplies.

“The saddest part for me is that there are people who are completely stranded,” he said. “They can’t even get out of their cars. Another girl in an isolated canyon has no food or water.”

Rabbi Wilhelm, who rewrote his sermon Thursday night to emphasize the need for volunteers “to seize the day,” said that a few hundred people making up a “very different turnout” prayed at CU Chabad over Yom Kippur.

Kol Nidre “felt like a relief,” he said. “Students were happy to get out of their dorms and join us. There was a very special energy.”

For those who couldn’t make it to synagogue, some observed the holiday at home.

“Yom Kippur is where you are,” said one man, who asked not to be identified. “We had the machzor [prayer book], we had the parsha [Torah portion], so we did it at home.”

“Although I couldn’t stay long at services, people were talking to each other, pooling resources and figuring out what was necessary,” Lev said.

Flooding virtually annihilated the Chabad Jewish Center of Longmont, located about 25 miles northeast of Boulder. “Our shul was completely ruined,” Rabbi Yakov Borenstein said Friday. “It looks like an island. We are right next to a creek here.”

Rabbi Borenstein managed to save the Torah scroll, prayer books and other ritual items before he was ordered out of the building Thursday. At 3 a.m. that night, the rabbi, his wife and four children were evacuated from their home.

“Our Hebrew school is gone,” he said. “The water is two feet deep. Humidity has warped all our sacred books.”

Rabbi Borenstein worried he might not draw a minyan to Yom Kippur services in Longmont, but almost 100 people showed up.

“G-d has a purpose in everything,” he said. “I see a tremendous amount of good in people. Volunteers and donations are coming from all over. What a beautiful world we live in.”