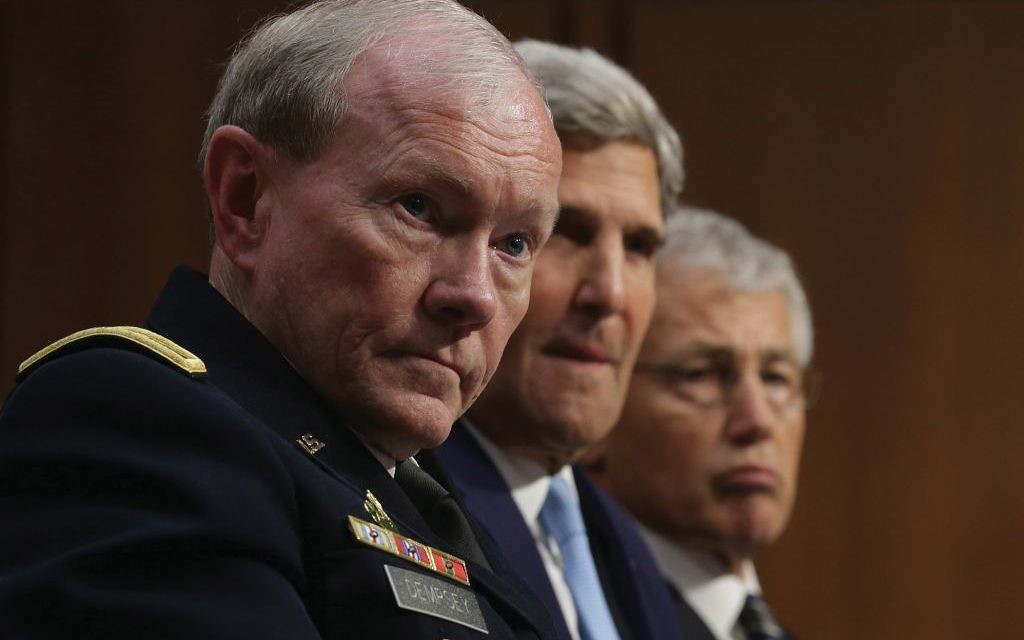 Tel Aviv — Congress must support President Barack Obama’s call for a limited military attack on Syria if Obama’s pledge to prevent Iran from becoming a nuclear nation is to be believed.

That was the message from American Jewish leaders this week even as Israeli Prime Minister Benjamin Netanyahu and other top Israeli leaders remained mum following Obama’s surprise Saturday announcement that he had decided to request congressional approval to bomb Syria for its use of chemical weapons against its own people.

One Jewish-American official involved in the Israel-U.S. alliance said Israel does not want “to encourage the U.S. to use military force — it’s a sensitive thing.” He said that although Israel is an interested party, it doesn’t want to be front and center of the debate in the U.S.

Thus, instead of focusing on the threat to Israel, the debate should be about the international ramifications of the response (or lack of) by the U.S., the official explained.

Indeed, statements by the Conference of Presidents of Major American Jewish Organizations, AIPAC, the Anti-Defamation League and other groups omitted explicit mention of the Jewish state.

The Presidents’ Conference statement Tuesday afternoon said there is a “moral imperative” for the U.S. to act, and agreed with Obama’s determination that America’s “vital national security” interests are at stake.

The 50-member organization said Obama’s decision to strike should serve as a warning to Iran as it strives to develop a nuclear weapon. Israel has warned that it would view a nuclear-armed Iran as an existential threat.

“Those who possess or seek weapons of mass destruction … must see that there is accountability,” the conference statement said. “Failing to take action would damage the credibility of the U.S. and negatively impact the effort to prevent Iran from achieving a nuclear weapons capacity.”

In interviews, Jewish American leaders were not as circumspect in speaking about Israel and insisting that the U.S. must not be seen as a paper tiger.

Dan Mariaschin, executive vice president of B’nai B’rith International, said the international community is “pretty certain that the Iranians are moving at full speed to create a nuclear weapon. Making a statement here — should Congress approve — I think will have an impact on the calculation being made in Tehran and other places, too.”

Yoram Ettinger, a former legislative attaché in the Israeli embassy, said he believes Israel should weigh in on the issue.

“Israel is an interested party, and most importantly, Israel provides a source of information,” he said. “The idea for Israelis is not to emphasize the Israeli interest, but rather expand on what is good and bad for America. Anyone who is concerned about American interests and the future of the Middle East should have a role to play in such a decision. We are assisting. We are not neutral because we are there.”

“Before anyone can suggest that Jewish organizations are leading the charge on this, we are coming in after bipartisan leaders of Congress have clearly taken a position,” he said.

In fact, only one Jewish group is believed to have issued an earlier statement of support for the president’s use of military force: the National Council of Young Israel. Shortly after 10 a.m. Tuesday, it issued a press release commending Obama for his decision and calling on Congress to support it.

It too said Obama’s resolve on this issue would “send a message to other rogue governments, such as Iran, which is relentlessly pursuing nuclear weapons, that there is a price to be paid for their inexplicable and inexcusable actions.”

Morton Klein, president of the Zionist Organization of America, said he found the decision to support Obama “a tough call because the other side [anti-Assad rebel forces] is also wicked — horrifically monstrous.”

“However, if America hits Syria, this will be a big blow to Iran and Hezbollah and will shore up America’s credibility when it threatens Iran,” he said. “And if America can eliminate much of the chemical weapons and other armaments of Syria, it is of value to America and Israel.”

Indeed, there are high stakes for the Jewish state in the outcome of the upcoming debate in Congress – an interest that goes beyond the immediate civil war to a possible regional showdown with Iran over its nuclear program

There was widespread disappointment in Israel at the seeming mixed signal sent by a president who, on the one hand made a strong moral argument for intervention in Syria over chemical weapons usage, and at the same time backed away to place the fate of such a decision in the hands of legislators.

Israeli officials made the same observation, with one saying: “The Iranians are laughing … and the Syrians are celebrating their triumph. It’s impossible for a massacre with weapons of mass destruction to go unpunished. It’s a moral issue.”

Foxman said that although there may be disagreement with the need for congressional approval, “From the perspective of the Jewish community, there is a moral imperative to act. We are a people to whom gassing of innocents is part of our history and memory. To witness men, women and children being gassed forces a moral imperative we need to address.”

“We don’t know how Syria, Iran and Hezbollah will respond,” he continued. “Yet, regardless, we know it is important for our community, society and the U.S. to act because the outlaws of society are looking to see what the U.S. will do — and inaction would be catastrophic.”

Diament of the Orthodox Union said he believed rabbis would address the issue during their High Holy Day sermons, and noted, “In the Rosh HaShanah liturgy one of the things we say is that God determines which nations shall have peace and which go to war. That obviously will be on the minds of rabbis and congregants.”

The sentiment was echoed by Rabbi Julie Schonfeld, executive vice president of the Conservative movement’s Rabbinical Assembly, who said: “Jewish communities around the world are watching what is happening and holding our breath, concerned about Israel’s security. We recognize that Israel is obviously not involved in what is going on in Syria; there’s a civil war there.”

But although Israel is “not responsible for what has occurred, somehow it finds itself in the middle,” observed Rabbi Joseph Potasnik, executive vice president of the New York Board of Rabbis.

He said he believes, however, that rabbis “will follow the lead of Israel, which is not talking about it publicly. Every synagogue prays for America and for Israel’s safety. I think rabbis will discuss the moral dilemma facing our people – not wanting to embolden those rebel forces affiliated with al-Qaeda and yet the gassing of innocents resonates deeply in this post-Holocaust era.”

Despite some withering criticism of Obama’s cautious response, analysts and officials acknowledged that should Mr. Obama win congressional approval it would mark a precedent-setting action against a state for chemical weapons usage that would strengthen Israel’s position in the future vis a vis Iran.

“The U.S. would move from merely lobbying against the proliferation and use of non-conventional weapons, to actual punishment,’’ said a former senior Israeli advisor. “This would be an elevation of the U.S. sense of mission, to be the law enforcer… this becomes a position of great moral thrust, it becomes a great undertaking.”