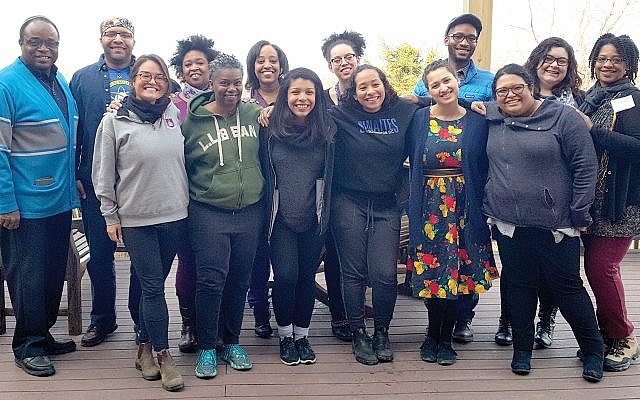 Over the past few months, the Jewish community has seen more than the usual amount of infighting over anti-Semitism and intersectionality. For no group, though, have these conversations been as fraught as for Jews of color who are part of both the Jewish community and at least one other ethnic minority community.

Though Jews of color are now estimated to make up between 10 and 20 percent of the American Jewish population, they are still rarely elevated to positions of leadership and remain far less visible to most than white Ashkenazi Jews. Aiming to highlight stories of the Jews stuck in the crossfire, the Union for Reform Judaism is releasing a podcast that it hopes will shed some light on a part of the Jewish community that has long been sidelined.

“Wholly Jewish” grew out of a cohort of URJ’s JewV’Nation Fellowship specifically for Jews of color, a program designed to implement strategies and programs to allow more Reform Jews to benefit from the leadership of Jews of color.

“There’s a large number of people in our Jewish community whose stories aren’t yet part of our collective narrative,” said April Baskin, former URJ vice president of audacious hospitality and host of the podcast. “Their story is as much a part of the Jewish story as anyone else’s,” said Rabbi Leora Kaye, URJ’s director of program and executive producer of “Wholly Jewish.”

The podcast is meant to both teach the Jewish community at large about the stories of Jews of color and to give a voice to Jews of color whose stories are often not told at all.

“It can be a reference point in a friendly way that when one of us gets asked, there’s actually a public place that we can say, ‘You know if you’re really interested in learning about the stories of Jews of color, here’s a great resource,’” said Baskin. “There’s just a lot more information that’s needed out there about the stories of Jews of color.”

Reflecting on the first season, of which just the first episode has been released so far, Baskin noted the frequency with which Jews of color are questioned about their Judaism and Jewish identity in their everyday lives. “I was surprised and saddened that, without being asked directly, I believe that in every single interview, at some point, each person acknowledged that very frequently their identity and their belonging in the community gets questioned when they’re in the Jewish community,” said Baskin.

For future seasons, Rabbi Kaye and Baskin hope to highlight the stories of other groups that are often untold, like LGBTQ Jews or non-Jewish parents raising Jewish children.

“It’s not always great and sweet and lovely,” said Rabbi Kaye. “There’s some hard stuff in some of these episodes but we also felt like it was really important to be open about the hard stuff as well as the really beautiful stuff.”

Listen to the first episode here.