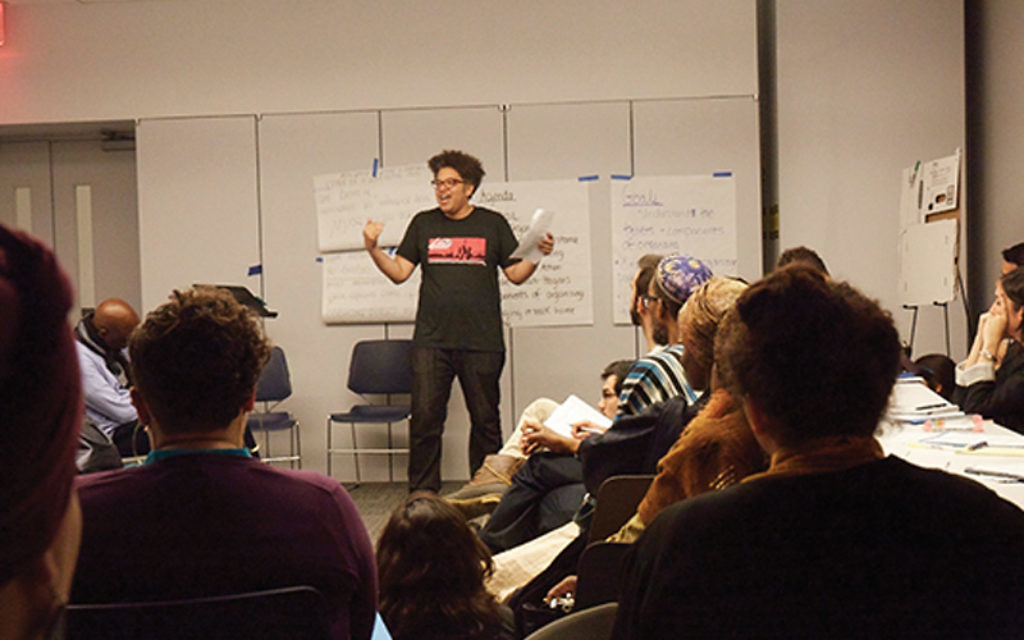 A session at a Jews of Color conference in Chelsea, NYC. Courtesy of Desmond Reich

As calls for criminal justice reform continue to spark national debate, the largest-ever gathering of Jews of color convened this week in New York City to discuss matters of racial justice inside and outside the Jewish community.

The conference, organized by the Jewish Multiracial Network (JMN) and Jews for Racial & Economic Justice (JFREJ) and cosponsored by Bend the Arc, touched on sensitive flashpoints in the conversation, including the racism Jews of color continue to experience in Jewish spaces and the role of Jews in the Black Lives Matter movement (which was co-founded by a Jew of color).

Buzzwords in the burgeoning conversation about race on college campuses, including “privilege,” “safe spaces,” and “intersectionality,” a concept used to describe the interconnectedness of various forms of oppression (for example, racism, sexism, homophobia, classism, etc.), were sprinkled generously throughout the sessions and workshops.

“The renewed focus on racial justice in this country translates directly to our institutions,” said Leo Ferguson, community and communications organizer for JFREJ. “The Jewish community is waking up to this fiasco and doesn’t know quite what to do about it,” he said, referring to the conspicuous lack of Jews of color in leadership roles at many Jewish organizations. He said the conference turnout — 150 people from across the country — well exceeded expectations.

Conference attendees were all Jews of color, and white staff members of the organizing groups were not permitted to attend sessions; press was limited to five of 25 sessions, and a conference organizer told this reporter that because she is Caucasian, she couldn’t interview attendees at lunch, but instead could interview a handpicked group of participants. Some of those at the three-day conference, which was held at the new home of Congregation Beth Simchat Torah on West 30th Street, wore colorful head wraps, turbans and dreadlocks; several participants carried drums and other instruments. Sessions addressed complex power dynamics within the Jewish community, internalized oppression and the privilege, or lack thereof, which accompanies skin color.

Kalycia Trishana Watson, 32, a conference participant originally from Jamaica, said that the conversation about race is still “not happening in a lot of spaces,” regardless of religious denomination. Though she grew up in a Reform setting in Illinois, she experimented with different forms of Orthodoxy until she grew “tired of my identity constantly being challenged” — today, she identifies as “just Jewish.”

At JOC Conference, 25 sessions were offered over the course of three days. Courtesy of Desmond Reich.

“It is exhausting to always feel like you are the ‘other,’” she said, recounting several uncomfortable experiences in which she was questioned about her Judaism because she is black. In one such instance, while she was participating in a Birthright trip in 2008, El Al security officers barraged her with questions about her Jewish background far more intensely than they did other passengers; she was asked to recite several pieces of basic Jewish trivia, including naming that week’s Torah portion. In another instance, during a speed-dating event at a New York synagogue, her partners repeatedly asked her if she was “really” Jewish.

“I’m always being asked to ‘prove’ my Judaism,” said Watson, who today conducts research on urban affairs at Columbia University. “It’s such a relief to be in a space where I don’t have to explain and justify myself. I can breathe here.”

Interest in the broader Jewish community about the experience of Jews of color has been bolstered recently by a number of studies indicating that Jews of color make up a larger percentage of the American Jewish community than previously thought. Be’chol Lashon, a nonprofit organization that strengthens ethnic and racial inclusiveness in the Jewish community, found that 20 percent of American Jews (about 1.2 million people) identify as Latino, Asian, African American, Sephardic, Mizrahi and/or mixed race. (The inclusion of Sephardic and Mizrahi in the Jews of Color category continues to be a matter of debate, said a conference organizer.) The 2014 Pew Religious Landscape Study found that 10 percent of American Jews identify as Black, Asian, Latino or mixed, and a UJA-Federation of New York Jewish community study in 2011 found that 12 percent of all Jewish households in New York City, Long Island and Westchester are biracial or nonwhite.

The issue of inclusion, which can be a difficult one in the Jewish community, has reached into all corners. An October 2015 resolution drafted by the Rabbinical Council of America, the largest coalition of Orthodox rabbis, reaffirmed the organization’s “absolute condemnation of racist speeches and deeds” and called upon community members to “combat the pernicious scourge of racism in any way they can.” A June 2015 RCA review of protocols for Orthodox conversions called for rabbis to show special sensitivity to “matters of ethnic origin as it may impact a convert’s future integration into the Jewish community.”

Still, despite these findings and statements, fundraising for organizations that cater to Jews of color continues to be an uphill battle, said Chava Shervington, president of the Jewish Multiracial Network and an Orthodox African-American Jew.

About 150 Jews of color attended the conference, far more than expected, said an organizer. Courtesy of Desmond Reich.

“There’s still a significant gap between interest and investment,” she said, adding that JMN is still completely volunteer-led, despite the organization’s national reach and significant offerings. While in the past three years she’s seen the conversation “change substantially” — JMN members used to have to “light themselves on fire” to gain entry to mainstream Jewish organizations, she joked — there is still a hesitance among funders to invest in organizations specifically committed to advancing the interests of Jews of color. “Now that the Jewish community is interested in people’s personal stories, we’re asking them to take that next step. The inclusion and empowerment of Jews of color is essential to the community we are, and to the community we are increasingly becoming.”

Embracing Jews of color means accepting that the Jewish community may begin to “look different, sound different, dance differently” — a prospect that is quite “scary” to many, said Newman. That fear also plays into the “funding question,” she said. “It’s disheartening to walk into certain large, impactful institutions in charge of Jewish peoplehood and have top leaders say they’ve never met a Jew of color,” she said. “Don’t they know who Lenny Kravitz is? Drake? We’re out here — you’re choosing not to see us.”

For Hannah Sultan, 26, the daughter of a Mexican-American mother and a Polish-Lithuanian Ashkenazi Jewish father, choosing to view herself as a Jew of color was a journey.

That changed when she started college and got involved with JFREJ. “I started to grow into my identity as a Jew of color,” she said. Though the process was “slow and difficult,” it’s now a source of strength and passion, she said. Among her millennial peers, she has felt the topic is adequately acknowledged and addressed. “It’s definitely something people are sensitive about.”

Though Sulton has found “safe spaces” in her life for discussing her dual identity, other conference participants said the convening was the first time in a long time that they’ve felt at home in a Jewish context.

“It feels like a family reunion,” said Tamara Fish, a panelist who spoke about pathways to leadership for Jews of color; she served as the past president at her Riverdale synagogue, Congregation Tehillah. “Even though we’ve never before shared the same physical space, there’s a sense of deep connection,” she said, referring to the crowd as “like-minded souls.”

“So many of us have gotten used to being the only ones,” she said.

April Baskin, vice president of Audacious Hospitality at the Union for Reform Judaism, a position intended to broaden the movement’s reach to previously marginalized groups within the community, spoke on one of the panels about her unique perspective as a Jew of color (Baskin is the daughter of a Jewish mother and African-American father.) “I’m aware that a huge part of how I got to where I am was about learning how to curtail how much of my blackness people could take,” Baskin said empathically, to nods of assent from the audience.

“I don’t want to have to water down the ethnic part of who I am so people hear me,” pitched in one audience member. “I’m tired of being the angry black lady all the time.”

Shais Rishon, an Orthodox African-American writer and blogger better known for his pen name MaNishtana, said that there’s a tendency in the Jewish community to start the conversation about race, but to avoid the “messiness” of the matter when things “you didn’t want to hear” come up.

“The last thing you want to do when speaking about the fight for real equality is to end with a nice little bow,” he said. “Better to leave on a discordant note, so people don’t assume this issue has been resolved. Leave it, in all its rawness and ugliness, so people are forced to face it.”