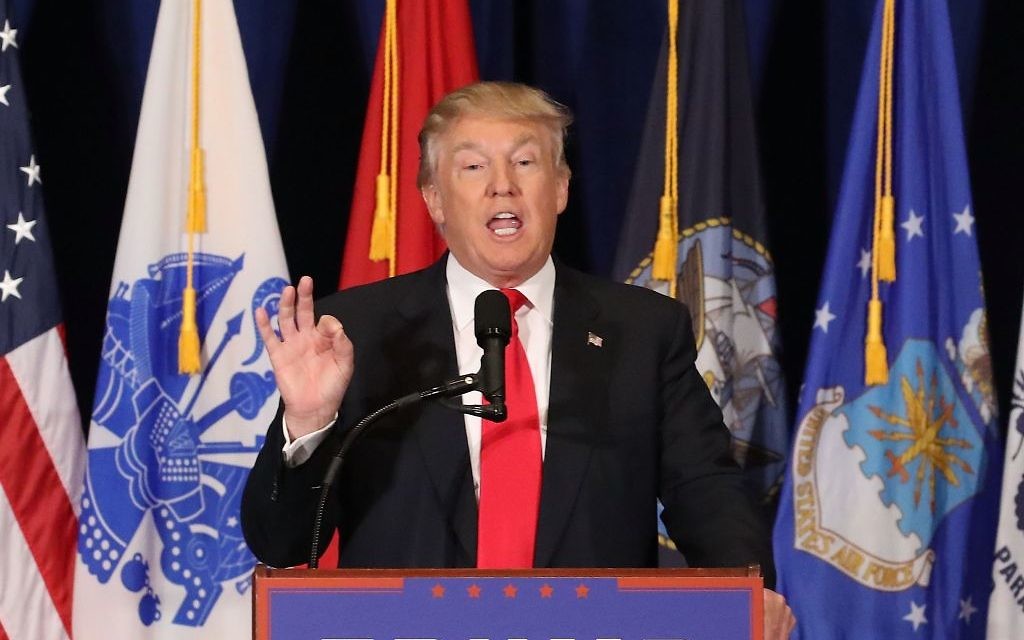 Rabbi Haskel Lookstein, as respected as any rabbi in America, was invited by Ivanka Trump, whose conversion he supervised, to give the invocation this week at the Republican National Convention. He accepted. He had given invocations for President Obama, and in 2008, when principal of Ramaz, castigated Ramaz students when he heard one say that Obama would be dangerous for Israel.

But to give an invocation at the Republican convention? Within hours, one Ramaz graduate posted on Facebook, “Seriously? This is embarrassing.” That graduate’s mother wrote about the “shock and shame” brought about by Lookstein. The Forward headlined, “Rabbi Lookstein, How Can You Shill for Donald Trump…?” A petition, signed by more than 800 former Ramaz students and his congregants at Kehillath Jeshurun, said they were “outraged … this is a shanda,” a scandal “beyond the pale.”

The petition asked Rabbi Lookstein, “Do you also shrug in the face of virulent, violent anti-Semitism? … all the good work you’ve done in your life … will be flushed down the toilet for 10 minutes on stage in Cleveland.” Despite all his work on behalf of Israel, Soviet Jewry and Torah education, “this is the single action history will remember you by, and history will not be kind.”

Two days after being invited, Rabbi Lookstein decided not to attend the convention, after all. He did release the prayer that he would have given: “Almighty God: We know that we are living in very dangerous times,” our blessings are threatened “by those who sow the seeds of bigotry, hatred and violence,” and he asked for the help of God “to form a government [that] will unite us with words of wisdom and acts of compassion …” What a shanda.

Rabbi Lookstein’s prayer was left unsaid. But if the rabbi who’d led his community for half-a-century could be silenced, what hope was there for other Jews who’ve become increasingly disinclined to admit that maybe, just maybe, they were thinking of voting for Trump? At various Jewish events in recent weeks, as well as in fishing for responses on Facebook, we indeed have spoken to Jewish voters who admitted to that sin that dare not speak its name: Voting for you-know-who.

As Seth Lipsky wrote in the online New York Sun, “The attempt to drive Rabbi Lookstein from offering a prayer in Cleveland is an instance of precisely the illiberalism of which the Republican nominee is often accused himself.” In Tablet, Yair Rosenberg wrote that Rabbi Lookstein’s critics, “while claiming to speak in opposition to Trump, they sounded quite a lot like him.”

Within the Jewish community, we’ve spoken to numerous Trump voters who feel some kind of pressure to keep their votes private. No Jews that we spoke to feared or experienced the alleged anti-Semitism on the Trump extremes; it was the anti-Trump intimidation in the Jewish mainstream (such as at Lookstein’s school, shul and replicated elsewhere) that was much closer to home and more likely to hurt.

One doctor in New York emailed that his Trump-leaning wife and two voting-age children “are afraid to advertise their political proclivities for fear of retribution from the left.” A gentle family, they don’t want to be called fascists, racists, Nazis, Islamophobes, xenophobes, homophobes, let alone deal with the notion that “history” or neighbors “will not be kind.”

Another woman told us, “Voting for Trump is like voting for P.T. Barnum. He is immodest, vulgar, dishonest, craven and unkind.” And yet, she fears that Hillary Clinton represents “a disaster,” foreign and domestically, with policies threatening freedom of religion and Israel. “The Democratic Party has swung so far to the left. … If I were confident that she would be better for Israel I might have some hesitation. But I’m voting for Trump.”

Melinda Mindy Ribner, a Judaic scholar who received non-rabbinic ordination from Rabbi Shlomo Carlebach, tells us that she was a Democrat all her life, right through the Bush years, but is now “supporting Trump,” though she has issues with his vulgarity. “The Democratic Party has taken a turn away from Israel,” and from religion, too, for that matter. She recalled the booing of Jerusalem and God (during a vote on a platform plank) at the 2012 Democratic convention. She cited the severe critiques of Israel proposed to the platform by Bernie Sanders supporters (but defeated by Clinton). She cited the isolation and boycott of the Israeli prime minister when he was invited to address Congress on the Iran nuclear deal.

However, when Ribner, an author and religious teacher, let it be known that she was thinking of voting for Trump, “two of my students said they had to remove my books from their shelves. I have to hope. I need the courage to be politically incorrect, because of my love of Israel and America.”

A civil rights attorney told us, “I’m on the left. Far left. I’d be for Sanders, if it weren’t for Israel. But a few years ago, I decided, We’re at war now — Israel is. It became ridiculous that I could care about anything other than the physical survival of the Jewish people.”

Trump “sometimes says things that are abhorrent,” said the attorney. “I can’t publically say I’m for Trump,” he continued, explaining that a key figure in his law firm was strongly for Clinton. “The intellectual elite has their ideas about Israel, and that’s where Obama comes from,” and that’s where Trump is not from.

“So many things that [Trump] says, once it would have bothered me,” said the attorney. “Now what bothers me is that 13-year-old girl,” Hallel Yaffe Ariel, stabbed in her bed by a Palestinian in Kiryat Arba. “Anyone care about her? Her life matters to anyone? We’re under attack. She was one of our own. She’s family. It’s a question of how much you identify. I’m not afraid to express leftist opinions, but I am afraid to talk too much about Israel. I won’t even hit ‘like’ on Facebook because I can feel the pressure,” from the top of society, not the bottom. “Don’t let anyone tell you that Jews supporting the Palestinians is about sympathy for the underdog; it’s about wanting to be in the intellectual elite.”

For all the talk that American Jews are repulsed by Trump, an American Jewish Committee poll from last September found Trump with 10.2 percent of Jewish support (both Republican and Democratic), more than any other Republican candidate.

Ten months later, some early Trump supporters are hesitating. Once, Larry Spiewak, chairman of the Flatbush Council of Jewish Organizations (COJO), laughed and said Trump was like Howard Stern, the “only guy who has the guts to say what others are afraid to say out loud.” With the passing months, Spiewak, without changing his mind on the issues, told us, “Look, I listen to Howard Stern every morning, but I don’t go around telling everybody.” And this week, Spiewak said, “I don’t know which way to go. It’s scary.” He didn’t like it when Trump started calling names, Little Marco, Crooked Hillary, Lyin’ Ted, making fun of Carly Fiorina’s face, Rand Paul’s looks, Jeb Bush’s energy, even Elizabeth ‘Pocahontas’ Warren,” a reference to the dispute over the Massachusetts senator’s Native American background. “Come on, we’re not in a schoolyard,” Spiewak said. “We’re talking about the presidency.”

And yet, Spiewak loves the Republican platform’s unequivocal support for Israel. Trump’s immigration policy “doesn’t bother me much.” But when he goes to shul or to COJO, “A lot of us, we don’t know what to do. Every other election I’ve ever been involved with, we knew [as a Jewish, Zionist community] which way to go. We were confident in our choices. Now, no matter who we each support, no one’s confident. I tell people that I’m thinking of voting for Trump, I’m embarrassed. How can I lower myself to vote for someone like that? No one intimidates me, I feel it myself.”

The Jewish voters for Trump are thoughtful, cautious. Peggy Noonan, writing in The Washington Post, said the ongoing critique that “the GOP is succumbing to nativism, nationalism and the culture of celebrity,” allows opponents “to avoid taking seriously Mr. Trump’s issues: illegal immigration and Washington’s 15-year, bipartisan refusal to stop it; political correctness and how it is strangling a free people; and trade policies that have left the American working-class displaced, adrift and denigrated.” Let alone Israel.

The religious Zionist voters don’t need any candidate to play to their fears. They are afraid, they think the Republicans are the only ones who understand, and now these voters fear having a conversation in which they'll admit it.