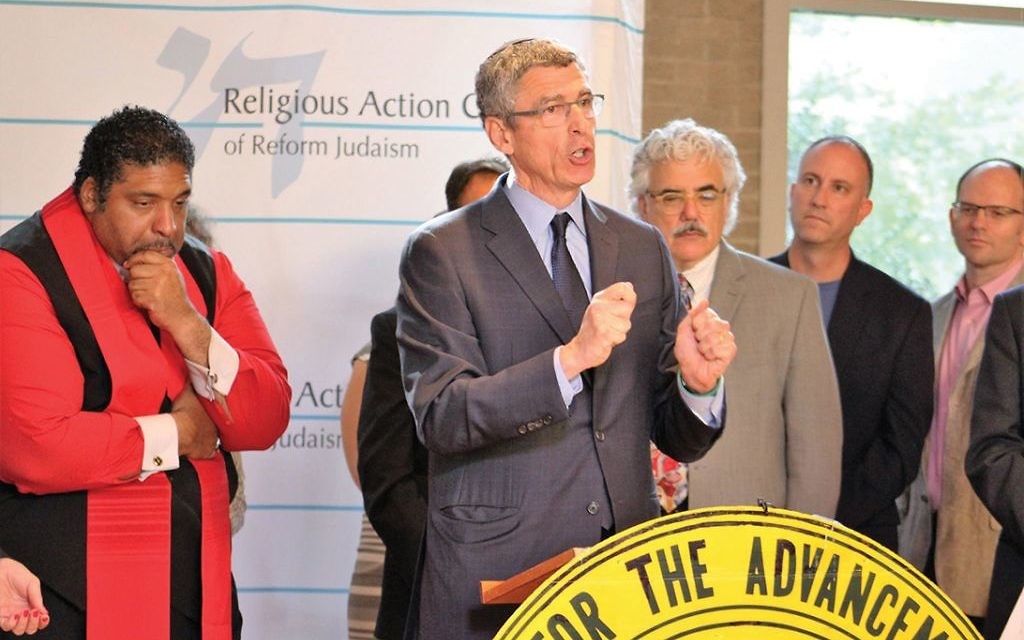 Rabbi Joel Mosbacher, who took over last month as senior rabbi of Temple Shaaray Tefila, a leading Reform congregation on the Upper East Side, cut his rabbinic teeth in the northern Atlanta suburb of Dunwoody, Ga.

Last weekend, he was back down South, not exactly on a bus-and-battered-station wagon Freedom Ride caravan, but on a voting rights mission just the same, as the issue of voter suppression is emerging as a leading one in the run-up to Election Day. “Our congregation,” two rabbis and seven congregants, is “going to North Carolina to stand on the side of voting rights for all Americans,” the rabbi told The Jewish Week on the eve of the trip. “My personal sensitivity to it, as a Jew, comes from knowing what it’s like to be the stranger, to be the marginalized.”

Rabbi Mosbacher was in the state capital of Raleigh as part of a new voter registration initiative that has the Reform movement partnering with the NAACP and PICO (People Improving Communities through Organizing). The initiative, which includes 100 Reform rabbis and lay leaders, is called Nitzavim, a plural form of “standing up.”

The Reform movement has been particularly critical of the Supreme Court’s decision in Shelby County v. Holder that invalidated parts of the Voting Rights Act. The movement’s Religious Action Center has argued that this has spurred states, including North Carolina, to enact registration requirements such as photo IDs, as well as cut back on early voting.

But the voting rights effort, with echoes of the old black-Jewish civil rights coalition, is not without its complications. It comes at a fraught moment for black-Jewish relations.

Those ties were frayed in March when Israeli Prime Minister Benjamin Netanyahu accepted an invitation from then-House Speaker John Boehner to address a joint session of Congress to lobby against President Obama’s effort to lead a coalition of world powers on a deal to limit Iran’s nuclear capabilities; African-American members of Congress saw it as a slap against the president on one of his signature issues. The move, some analysts concluded, forced Jewish Democrats into the position of having to choose between support for Israel and support for the president.

The relationship was rocked more recently when a Black Lives Matter platform branded Israel as a genocidal, apartheid country, and expressed support for the BDS (boycott, divestment and sanctions) movement. Center-left Jewish groups, walking a tightrope, roundly criticized the Israel planks in the platform, but generally did not break with the Black Lives Matter movement, hoping to keep alive the possibility of coalition building on other BLM issues such as police reform and mass incarceration.

The black-Jewish “alliance” is in a constant state of never being what it was — if it ever was — and summer is the traditional season of discontent. August is when the bodies of Andrew Goodman, Michael Schwerner and James Cheney (two Jews and an African-American) were discovered; they were murdered together while attempting to register blacks to vote in Mississippi in 1964. And yet that same summer saw New York City ripped by black riots peppered with anti-Semitism. Twenty-seven years later, in another haunted August, black residents, frustrated by what they perceived as preferential treatment given to Jews by police and city officials, rioted in Crown Heights in a surge of violence the chasidim there found reminiscent of a pogrom.

Rabbi Mosbacher is aware of the complicated context, and perhaps it is fitting that the Reform movement’s ally in the new voter registration push is the old-guard NAACP and not Black Lives Matter. The BLM broadside against Israel, the rabbi said, “certainly did not help the relationship between Jews and African-Americans, that’s for sure. I’m not going to North Carolina to stand with Black Lives Matter.”

He pledged to protect anyone on Election Day, whether it be intimidation from the left or right. “Our effort on Election Day will be nonpartisan, making sure that people have access to the ballot box.” And if a Donald Trump voter is the one being heckled and intimidated? The rabbi replied, “The right to vote is not a partisan issue.”

Rabbi Jeffrey Salkin, an award-winning blogger and leader of Temple Solel, a Reform congregation in Hollywood, Fla., told The Jewish Week, “The voting booth is the Holy of Holies of American civic life. I am deeply moved that the Reform movement is helping to protect the right to vote. Especially at a time when there is renewed discrimination and obstruction of voting, our efforts are yet another chapter in the fight for social justice.”

Rabbi Salkin, who logged years in the South as senior rabbi of the historic Reform congregation The Temple in Atlanta and another in Columbus, Ga., continued: “Our great-grandparents fled to American shores because of the American promise — that all citizens have the right and obligation to shape the American future. American democracy is a guarantee. But we still have to struggle for it. More than a half century after we went South to register voters — and this is still going on? Yes, ‘been there, done that’ — but we cannot give up this fight.”

But suspicion of the voting process has been a hallmark of the right and left in 2016, with both the Bernie Sanders and Donald Trump campaigns warning that the election system is “rigged.” (Trump has hinted that the election itself will be rigged because of voter fraud, while Sanders has suggested that the delegate-selection process is rigged.) Republican operatives have been recruiting lawyers and poll watchers of their own, and the Republican National Lawyers Association has documented hundreds of instances of voter fraud in the past decade, leading to convictions or prosecutions in 46 states. The fraud included numerous examples of non-citizens being registered and voting, vote buying, falsely filing election documents, absentee ballot fraud, multiple voting, felon voting and voter impersonation. (Nonpartisan groups that have looked at voter fraud conclude that it is extremely rare.)

Rev. William Barber II and NAACP President Cornell Brooks had asked the Reform movement to help protect “the right to vote this election year,” and so Nitzavim was born; it is expected to continue for the duration of the campaign. A Reform movement statement on the new initiative said, “Recent elections have shown that eligible voters can be turned away at the polls. Reform movement congregants with legal expertise are encouraged to join the effort to protect the right to vote in places where it is most vulnerable.”

The project was launched in North Carolina, said the leader of the Reform movement, Rabbi Rick Jacobs, because the state’s “voter suppression laws — swiftly enacted after the Supreme Court’s 2013 decision in Shelby v. Holder struck down a key part of the Voting Rights Act — are among the strictest in the nation. Same-day voter registration has been eliminated, early voting has been restricted, and onerous voter [photo] ID laws have been implemented.” (A federal appeals court recently struck down North Carolina’s restrictive voter-ID requirements.)

Rabbi Mosbacher said about the two-day trip down South that Friday was primarily for training, “and then Saturday [was for] going out into the community and helping with voter registration. I don’t want to overstate the fact that [we were] there for one day; there’s a lot more work to do. This also extends through Election Day, when we’ll be sending out teams, including lawyers and clergy, to where voting rights may be at risk.

“If this were just one day, it would be meaningful to the people who went, but not necessarily impactful. If we can extend our efforts into November we will have made a meaningful impact, and made a meaningful statement, frankly, about the opportunity for the African-American community and the Jewish community to work together in constructive ways, symbolic of work that we used to do together, meaningful work that we haven’t really done in a long time.”

As for the recent strains in the black-Jewish dialogue, Rabbi Mosbacher said, “In order to confront people,” in the best way, “you have to be in a relationship with them. The uneasy question becomes: ‘If we disagree about something does it mean we can’t do anything together?’ Sometimes the answer might be yes, if what we disagree about is so profoundly critical, and the issue of Israel is a key issue for me.

“It will be interesting to see how this plays out,” the rabbi summed up. “If we can get into a relationship with people, maybe we can change hearts and minds.”