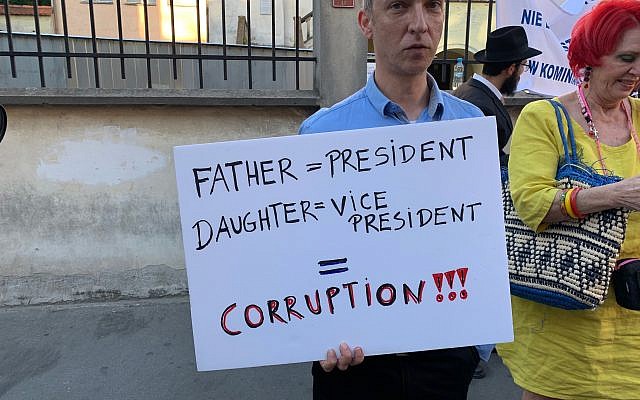 A protest last week in front of the Izaak Synagogue in Krakow. Critics oppose the shuttering of the synagogue by the community’s leadership. Michael Berenbaum

Masked armed guards — it must have been anti-Semitism. How low could the Poles go, especially in a week when Krakow was flooded by Jews from all over the world participating in the Jewish Cultural Festival and the Jewish Community Center’s Ride for the Living from Birkenau to Krakow?

But it was not anti-Semitism. It was the ugly, vicious, anti-Jewish act of the Gmina, the official organ of the Jewish community, against the rebirth of Jewish life in Krakow.

Dov Landau, a Holocaust survivor in his 90s, was in tears. He had seen this before, but it was the deeds of enemies, not his fellow Jews. Rabbi Avi Baumol was worried. A daily attendee at the minyan, his tefillin were inside. Luckily he had a spare pair in his adjacent apartment. Dovid Singer, a Bobov chasid, was frantic. It was Monday, the Torah must be read. Where could he get a Torah and a minyan? Jonathan Ornstein stood by his window overlooking the synagogue, not quite believing what he was seeing. His vantage point allowed him to photograph the scene.

A word of background: the Gmina has been the heir of Jewish institutional property. Private Jewish property has not been restored in Poland. In Krakow, the holdings of the Jewish community are significant, and yet these vital resources have been treated as if the community were a private business, intent on maximizing profit with few responsibilities for the continuation and the enhancement of Jewish life.

One family has ruled the community for the past 70 years through communism and nascent democracy and even now during the right-wing authoritarian epoch of contemporary Polish history. The current patriarch, Tadeusc Jakubowicz, is president, his daughter, Helena, is vice president, and his son-in-law is a powerful force behind the scenes. They have ruled not as if they were custodians of Jewish communal resources but as if this were a family enterprise.

The Gmina is a closed community. It does not welcome new members, even if they are observant, distinguished Jews. Professor Jonathan Webber, a religious Jew and a leading authority on the Jews of Galicia, had to sue in European Union court to join. Ornstein, the dynamic and charismatic leader of the JCC, was expelled, seemingly $8 behind in his dues. His application for reinstatement was rejected, and guards barred his entry into a community meeting to plead his case. Both Webber and Ornstein are halachic Jews; their mothers were Jewish, so too, their pious fathers. The Gmina has some 125 members; the JCC has more than 700, most of them halachic Jews and thus eligible for Gmina membership, but they have been discouraged from joining.

The Izaak Synagogue was restored not by the Gmina but by donations from Jews around the world. As landlords, the Gmina wanted to get rid of its current synagogue tenant and get higher rent from a catering establishment, so it decided to force the synagogue community out by raising the rent 1,000 percent. There have been press reports that, according to the Gmina, the current Chabad rabbi has damaged the synagogue but I have been to the synagogue on multiple occasions for many years and have noticed no such damage.

It didn’t matter that the Izaak was a functioning synagogue with services morning and evening, and a kosher restaurant next door. The restaurant is open on Shabbat and takes advanced reservations to serve the observant Jews who visit Krakow and Auschwitz every week.

In the weeks before the gates were locked, and Jews were barred, the Gmina had shut off the electricity. When the synagogue bought a generator, the Gmina turned off the water on the eve of the Jewish Cultural Festival, when thousands of Jews would be visiting Krakow — and the Izaak Synagogue. This is the synagogue that had a congregation, a mission, a place where services were held and Torah was taught. Such behavior was a chillul Hashem, a desecration of God’s holy name.

I have been visiting Krakow regularly since the 1970s. I was there when the synagogues were being closed because there were no Jews to attend them. One became a crutch factory. I was at the magnificent Progressive synagogue adjacent to the JCC for what seemed to be its last service. The Izaak, before its restoration, was a crumbling, dangerous building. Built in the 1700s, it seemed as if would not survive into the 21st century and then the possibility of rebirth.

I have been in the presence of Jewish leaders of international renown, of distinguished rabbis, of people “in the know” who spoke knowingly of the Jakubowiczes holding too much power, winking and making snide remarks but unwilling to take action. A man outside the synagogue during a recent protest carried a sign reading, “Father = President / Daughter = Vice President = Corruption!!!”

This Gmina has failed.

It is an obstacle to the rebirth of Jewish life, not its vehicle. It not only does not help this remarkable regeneration of Jewish life, but it hinders it. I say this because I have seen this. I stake my reputation on this charge.

Had the Poles done this to the Jews, the entire Jewish world would have been protesting. When Jews do this to fellow Jews, our protests cannot be any less intense. World Jewry and its organizational representatives must speak out and take action.

Krakow Jewish life is at once vital and vibrant, a promising success story of Jewish rebirth, yet its official representatives are engaged in vile behavior. This is a moment of decision.

Michael Berenbaum is a professor of Jewish studies and director of the Sigi Ziering Institute at American Jewish University in Los Angeles.