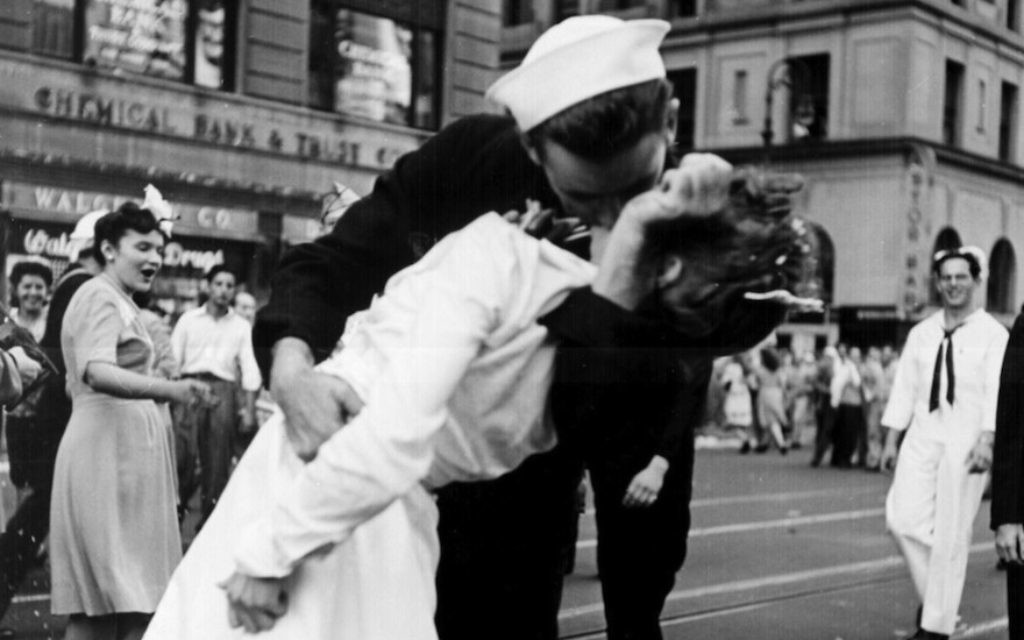 Greta Zimmer Friedman, the Jewish refugee whose Times Square kiss from a sailor on the day World War II ended became an iconic photo, has died.

Friedman, who had been living at an assisted living facility in northern Virginia, died Sept. 8, CBS reported, quoting her son, Joseph Friedman. She was 92. She will be buried at Arlington National Cemetery alongside her husband, Mischa Elliott Friedman.

For years, the identities of the people in the photograph by Life Magazine photographer Alfred Eisenstaedt, taken on the evening of Aug. 14, 1945, after the news of Japan’s surrender was broadcast, were unknown.

After an appeal from Life Magazine in 1980, a number of people identified themselves as being in the photo. A 2012 book, “The Kissing Sailor: The Mystery Behind the Photo That Ended World War II,” used forensic analysis to validate two claims, by George Mendonsa, a sailor returned from the Pacific, and Zimmer, who had fled Austria with her younger sisters in 1938.

Mendonsa was in Manhattan on his first date with Rita Petry. News of Japan’s surrender broke while they were watching a movie. They went to a bar to celebrate and then headed to Times Square. Mendonsa saw Zimmer, a dental assistant, and mistook her for a nurse. He had been grateful to nurses since May 11 of the same year, when kamikaze planes hit his aircraft carrier, and he watched nurses from a hospital ship arrive to tenderly care for the wounded.

He grabbed Zimmer, a grinning Petry looking on, kissed her, and continued on. (The kiss didn’t dampen the young couple’s enthusiasm for one another; Mendonsa and Petry married and remain a couple in Rhode Island to this day.) A U.S. Navy photojournalist, Lt. Victor Jorgensen, caught the same picture from a different angle.

Zimmer became a costumer and for a time was part of a circle of theater professionals in New York. She met Friedman, a doctor, and they married in 1956.

The kiss became Eisenstaedt’s most iconic photo. Its symmetry and natural light capture the fading New York day. The grinning spectators encapsulate the relief Americans felt at the end of the war. Posters of the photo hang on many walls, and countless fans have tried to replicate the moment.

Eisenstaedt, himself a Jewish refugee, was already well known. He shot one of the best known photos of Nazi Propaganda Minister Joseph Goebbels at a League of Nations conference in Geneva in 1933. In it Goebbels glares at the camera. Moments earlier, Eisenstaedt had captured Goebbels grinning. Some photography enthusiasts have speculated that in the interim Goebbels learned Eisenstaedt was Jewish.

In recent years, the Times Square photo has prompted discussion over whether Mendonsa’s actions were appropriate. Zimmer did not anticipate the kiss.

Her son, Joseph, earlier this month told The New York Daily News that his mother was sympathetic to those views, but also to Mendonsa, with whom she was reunited for a CBS news item in 2012.

“My mom always had an appreciation for a feminist viewpoint, and understood the premise that you don’t have a right to be intimate with a stranger on the street,” he said, but added that she thought Mendonsa to be “a lovely person.”

“She didn’t assign any bad motives to George in that circumstance, that situation, that time,” he said.