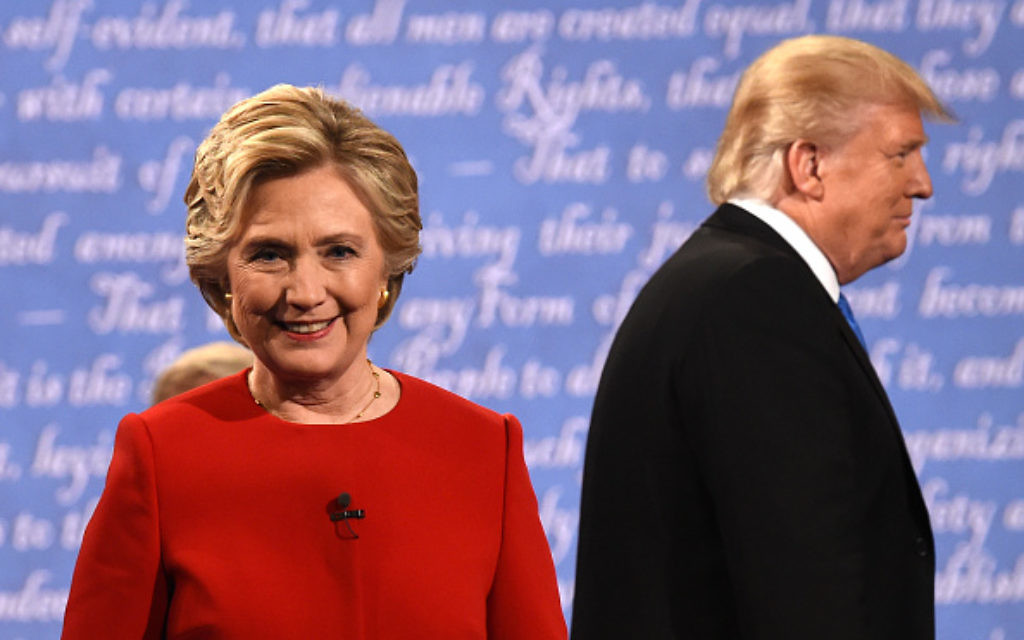 With the first bruising presidential debate behind them and only five weeks before Election Day, Donald Trump and Hillary Clinton are turning their attention to industrial battleground states in an effort to gain ground in a race that has become too close to call.

And as they do, a new study suggests the Jewish vote in two of those key states could determine the next president.

It was when Trump hammered away in Monday night’s debate about the loss of jobs in key industrial states that he appeared most in command, analysts said. “You go to New England, you go to Ohio, Pennsylvania, you go anywhere you want, Secretary Clinton, and you will see devastation where manufacture [cq] is down 30, 40, sometimes 50 percent,” he said. “NAFTA [North American Free Trade Agreement] is the worst trade deal maybe ever signed anywhere, but certainly ever signed in this country. …”

Clinton replied that there are “different views about what’s good for our country, our economy and our leadership in the world. … And people have looked at both of our plans, have concluded that mine would create 10 million jobs and yours would lose us 3.5 million jobs, and explode the debt which would have a recession.”

Analysts consider Pennsylvania — along with Florida and Ohio — as critical swing states in this year’s election. The new study, billed as the first state-by-state, county-by-county examination of the Jewish population, finds that the votes of Jews in parts of Pennsylvania and Florida could be decisive in those states.

“That’s three times more than the national numbers” of Jews, according to Daniel Parmer, a research associate at the Steinhardt Social Research Institute at Brandeis University, which conducted the study.

Similarly, the 209,400 Jews who live in the Palm Beach area of Florida comprise nearly 15 percent of the adult population. Barack Obama carried Florida in 2012 by just 74,309 votes—less than 1 percent of the total vote.

And in the 2000 election, George W. Bush carried Florida by only 537 votes, giving him all of Florida’s 25 electoral votes. That edged him over the top to a total of 271 electoral votes — one more than required to defeat Democrat Al Gore and win the presidency.

The new study found that more and more Jews are identifying as independent voters, according to Leonard Saxe, the institute’s director.

Saxe said the data used for this analysis came from 250 surveys by governments, large foundations and organizations.

“For the first time we have accurate data on people who claim Judaism as their religion,” he said, noting that computers were used to analyze the data.

“It takes 24 to 48 hours for computers to run the models,” Saxe said. “We use dozens of different combinations to get the final model that gives us the best estimate. Previously we didn’t have the statistical tools or the computer power.”

During the presidential debate, Trump noted that Israeli Prime Minister Benjamin Netanyahu is “not a happy camper” over the Obama administration’s Iran nuclear agreement that his opponent, Democrat Hillary Clinton, helped orchestrate when she was secretary of state.

Trump’s obtuse reference to the strained relations between Netanyahu and President Barak Obama was the only reference to Israel during the 90-minute debate at Hofstra University. That rift is just one of the reasons the Pew Research Center in April found overwhelming Republican support for Israel — 75 percent — compared to just 43 percent among Democrats.

Although analysts insist that both parties are pro-Israel, they point out that Democrats are more willing to be critical of Israel on issues such as West Bank settlements at the same time that Republicans are more unconditionally supportive. And they note that such support has been increasing for nearly 50 years.

But that has not translated into Jewish votes for the Democrats when it comes to presidential elections. In fact, the pattern since 1928 is that about 70 percent of the Jewish community has voted for the Democrat, according to a recently released study.

Conducted by the Ruderman Family Foundation’s Program for American Jewish Studies at the University of Haifa, it found that even when concerns were raised by members of the Jewish community about Obama’s ties to a controversial Chicago preacher who often criticized Israel, Obama still received 78 percent of the Jewish vote in 2008 and 69 percent four years later.

Thus, it said, despite efforts by the Republican Party to reach out to Jewish voters over the last few decades, the “liberal-Jewish-Democratic connection has strengthened not weakened since Ronald Reagan.”

“Even though the Republican Party is more pro-Israel than ever, and sometimes more ‘pro-Israel’ (however you define that) than the Democratic Party, American Jewish liberalism has become a mentality, a sensibility, an ideology, a cultural identity,” it added.

It is therefore not surprising that half of all contributions to the Democratic Party are from Jews while just 25 per- cent of the money donated to the Re- publican Party is from Jews, according to the study’s author, Gil Troy, a professor at McGill University in Montreal. The study found also that American Jews “more than ever” are embracing their liberalism — especially this year. “United by the fear of Evangelicals, ‘Trumps’ and the Tea Party, their liberalism is defined by freedom, liberation and autonomy,” it said.

"The Jewish community remains extremely active in American politics and has achieved a real impact on so many levels of the political scene, yet the motivations of the community are varied and complex,” said Jay Ruderman, president of the Ruderman Family Foundation. “The secret of the com- munity’s political success can be boiled down to an intense desire to improve American society and its role in the world.”

A recent Wall Street Journal/NBC News poll found that perhaps as much as 20 percent of the American electorate is still not firmly committed to either Clinton or Trump and may be toying with voting for a third party candidate or even sitting out the election.

Gary Johnson, the presidential candidate of the Libertarian Party, has started an online petition signed by more than 1 million people seeking to convince the Commission on Presi- dential Debates to include him in the next debate. The commission has said it would include Johnson if he averaged at least 15 percent in the polls, something he has failed to do. But Johnson insists that other polls show that more than 60 percent of Americans want him and his running mate, Bill Weld, in the debates to present a “credible alternative to Clinton and Trump.”

The general consensus of observers following Monday’s debate was that Trump won the first half-hour and that Clinton won the remaining 60 minutes.

“If the debate did anything, it prob- ably broke for the moment the belief that he [Trump] had the energy and the momentum,” said Aaron David Miller, who has been an adviser to both Re- publican and Democratic secretaries of state. “It stopped the refrain that he was on a roll.

“The fact that Israel was not mentioned or discussed was not surprising,” he said. “There are so many more critical issues, and within 24 hours of the debate both met with Netanyahu [who was in New York for the United Nations General Assembly]. … Both were photographed with the prime min- ister, and given the number of other issues it would have been hard for one candidate to attack the other on the Israel issue.”