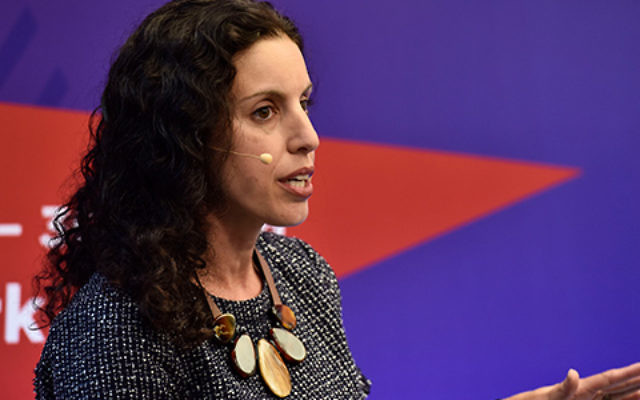 Sarah Hofstetter, CEO of 360i

Editor’s Note: Judith Rosenbluth was a finalist for The Norman E. Alexander Award for Excellence in Jewish Student Writing. Nearly 70 contestants from around the country answered the following question: “Choose a living or deceased Jewish-American woman and write about her legacy in any field such as law, medicine, sports, politics, entertainment, and more. Why are her accomplishments meaningful to you?” The contest was sponsored by the Jewish-American Hall of Fame and The Jewish Week Media Group.

According to published statistics, only 14.5 percent of business executives in the United States are women. Sarah Hofstetter is one of a very small group of women who has risen to the top of a male-dominated field. The 38-year-old Jewish mother of two is the CEO of 360i, an award-winning advertising agency. Hofstetter received the 2012 Stevie Award for “Female Advertising Executives of the Year,” has been named one of Ad Age’s “40 Under 40” marketing leaders and has landed some major clients such as Coca-Cola and OREO. What makes her amazing, though, is that throughout her career, she continues to observe the Sabbath every week, keep a kosher diet and proudly identifies as a Jew.

Sarah Hofstetter has shown me that being a practicing Jew and being successful in the business world go hand-in-hand.

In an interview with Fortune magazine, Hofstetter retold a story about how her Jewish beliefs collided with her business life. A few years back, Hofstetter was thrilled to acquire a new client, Oscar Mayers.  However, her excitement soon turned to anxiety when one of the executives asked her to sample some of the meat company’s new products. Hofstetter explained that although it had been her lifelong dream to work with such a prestigious company, her faith prohibited her from eating non-kosher food, big client or not. In the end, her decision not to eat the food samples didn’t lose her the client, it won her a newfound respect from the executives at Oscar Mayer and her professional colleagues.

Hofstetter said in her interview that ever since she was young, she made a commitment to herself that she would keep her Jewish values and practices, even while interacting with the non-Jewish world. Doing so meant declining invites from friends to sneak out the house and go to McDonald’s on Friday nights, which she remembers was difficult. She noted that observing the complicated laws of kashrut taught her how to be selective and choose only the best quality products, which is an important skill to have in the business world.

As a Jewish teen who is interested in going into business and marketing, I find Hofstetter to be an inspiring role model. She is someone who has kept her values and faith and still managed to rise to the top of her field. I think that Jewish teenage girls have a lot to learn from Hofstetter, even if they aren’t interested in business. Her accomplishments have motivated me to pursue a career in business because I now realize that keeping my Jewish values and traditions aren’t restrictions; they will help me reach my goals. Sarah Hofstetter has shown me that being a practicing Jew and being successful in the business world go hand-in-hand.