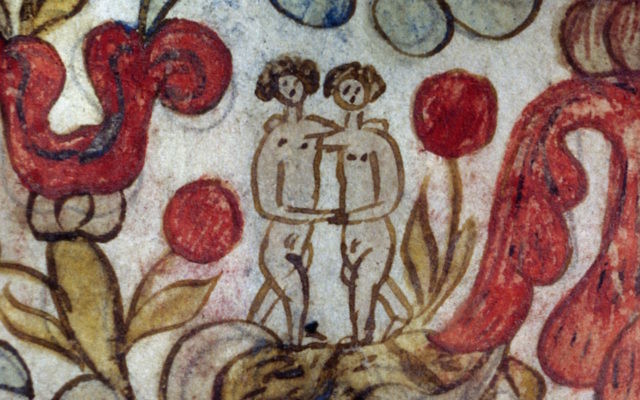 Adam and Eve depicted on a 19th-century ketubah, a Jewish marriage contract, from the Norsa-Torrazzo Synagogue in Mantua, Italy. (DeAgostini/Getty Images)

NEW YORK (JTA) — One of the wisest things ever said about intermarriage came from former Atlantic sports columnist Jake Simpson: “No stat could have predicted … the wonder that was David Tyree’s helmet catch in Super Bowl XLII.”

Granted, Simpson wasn’t writing about the high rates of Jews marrying non-Jews. He was complaining that the growing emphasis on statistical analysis in sports — sabermetrics — was undermining the human element of the game. A statistician will tell you who is likely to catch a touchdown pass. But only ecstatic Giants fans (and heartbroken Patriots fans) could appreciate the glories of Tyree’s improbable reception.

Another sportswriter, Joe Posnanski, described it as “the human record versus the human heart.”

It’s not a stretch to recognize a similar argument among those who care about Jewish “continuity” and what it means to live a meaningful Jewish life. On one side, the think tanks and sociologists are churning out statistics (Hebrewmetrics?) suggesting the dire toll intermarriage is taking on the strength and vitality of Jewish life.

The implication is that the non-Orthodox Jewish population is in a steep demographic decline, perhaps perilously so.

On the other side, rabbis and others in the grassroots are demanding that Jewish leaders take into account the deeply personal stories of individual Jews and those who love them, lest they feed the alienation from Jewish institutions that the numbers crunchers complain about.

According to a new analysis by the Jewish People Policy Institute, or JPPI, analyzing stats on “non-haredi” American Jews aged 25 to 54, “just 21 percent are married to Jews, while well over twice as many [50 percent] are non-married and 29 percent are intermarried.” Only 15 percent of this cohort are in Jewish-Jewish marriages with Jewish children at home.

The implication, once you exclude the haredi Orthodox — as well as the modern Orthodox, who often marry before age 25 — is that the non-Orthodox Jewish population is in a steep demographic decline, perhaps perilously so.

The Jewish engagement gap between the inmarried and the intermarried is “truly enormous.”

As authors Steven M. Cohen and Sylvia Barack Fishman point out in an essay for JTA, this decline is not only a function of intermarriage. It’s also the result of late marriage, no marriage and low birth rates.

Yet the Jewish engagement gap between the inmarried and the intermarried is “truly enormous,” according to JPPI. The inmarried are more likely to feel that being Jewish is very important, to have Jewish friends, to belong to a synagogue and to raise their children “in the Jewish religion.” By contrast, “non-Jewish spouses and children in the home each seem to diminish the likelihood of Jewish engagement.” 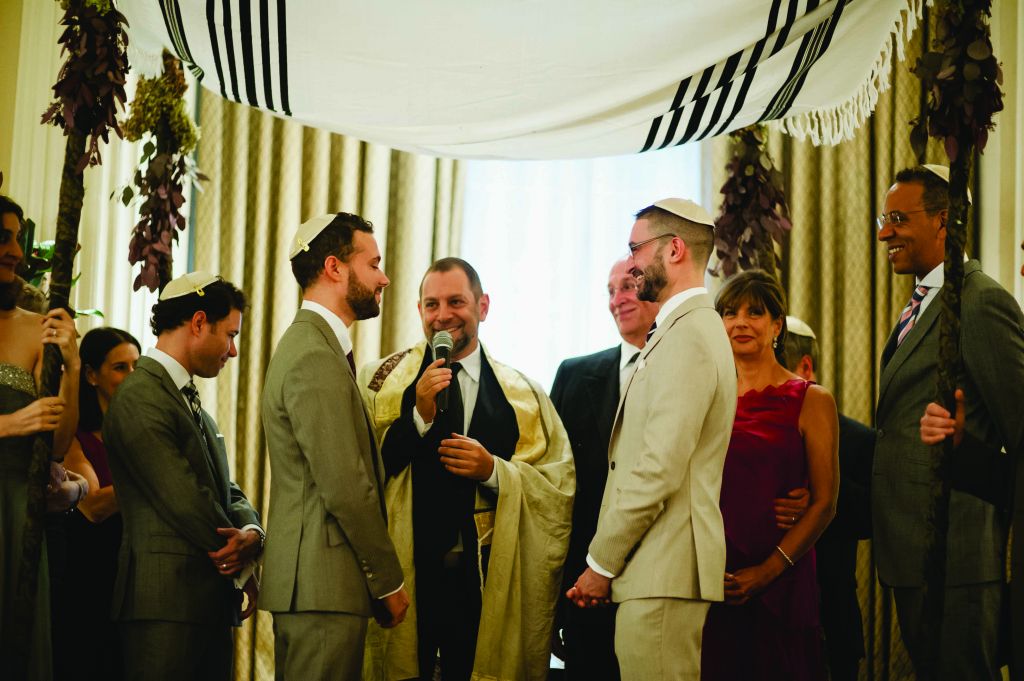 Rabbi Lau-Lavie officiating at a wedding. Courtesy of Bonnie Burke

These kinds of analyses alarm Jewish institutions; they seek answers in institutional ways. Should more money be invested in a highly engaged “core,” or spread among outreach to the “periphery”? Does the smart money go to the hip startups that are trying to attract less-engaged Jews, or to the legacy institutions that still have large (if shrinking) membership bases?

Just days after the JPPI study came out on June 5, there was a much different kind of reaction to the intermarriage “challenge” coming from rabbis of at least three distinct stripes.

Clergy at B’nai Jeshurun, a big and influential synagogue on New York’s Upper West side, announced that they would begin officiating at the weddings of interfaith couples who commit to creating Jewish homes and raising Jewish children. (Read the full story here.)

Downtown, Rabbi Amichai Lau-Lavie, who runs the innovative Lab/Shul, said he, too, would officiate at intermarriages despite his training in the Conservative movement, which bans its rabbis from doing so. (Full story here.)

And in an essay in our publication, Rabbi Avram Mlotek, who was ordained at the liberal Orthodox Chovevei Torah yeshiva, suggested that “it’s time we revisit our tribalistic approach toward intermarriage and our highly divisive conversion practices.” Mlotek was coy about what that would mean in practice, although he did suggest that the Orthodox and Conservative movements should take a cue from the Reform’s “welcoming posture towards families with non-Jewish partners.”

B’nai Jeshurun is not affiliated with a movement and its decision is internal; Lau-Lavie and Mlotek will have to deal with the consequences within their affiliated institutions. (Chovevei Torah already issued a statement reiterating that it forbids its rabbis from performing intermarriages.)

The denominational and halachic issues are intriguing for insiders, although the casual reader might be more taken with the personal stories each of the rabbis tells. In a nearly 60-page explanation of his decision, Lau-Lavie wrote of the interfaith marriages he performed before his ordination as a Conservative rabbi, as well as the requests he continues to receive from “Jews and people of other heritages or faiths seeking a Jewish wedding, life, and community. 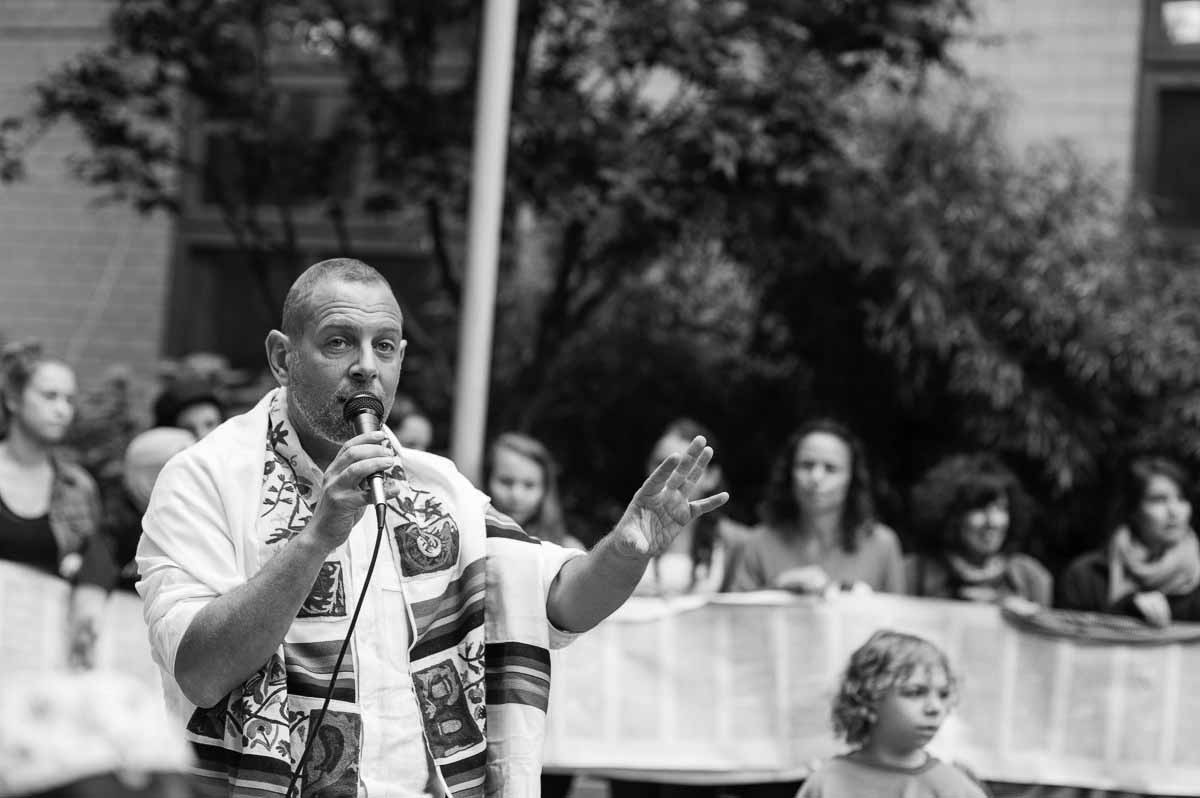 Risk taker: Amichai Lau-Lavie fears his break with tradition may weaken Jewish life. But he is optimistic it will have the opposite effect. Jennifer Lee

“Each story was unique,” he wrote. “I couldn’t bear saying no. The firsthand encounter with the pain of rejection and its consequences to the couple, to me, and to our community convinced me of the need for an urgent solution. It has become not just a practical issue but also one of deeply personal, ethical, and theological dimensions.”

Mlotek wrote of the young Jewish woman he met as a staffer on Honeymoon Israel, which takes interfaith couples on heritage trips to Israel. “Rachel” told Mlotek that her parents cut her off after she became engaged to an Arab man.

“My guilt is tremendous and I understand my parents’ disappointment,” she explained through tears. “Still, is there any way there might still be a space for me within Judaism? I feel as if God has brought my partner and me together.”

Mlotek wrote: “A posture of radical hospitality and love will be the only way to ensure Jews remain Jewish and Jewish remains worthwhile.”

For the B’nai Jeshurun rabbis, the personal is theological, to borrow a phrase. Their decision came with the launch of what they are calling the Jewish Home Project, which will feature support programs, “resources for daily Jewish living, a more robust conversion program and rich Jewish education courses.” If rabbis a generation ago performed intermarriages to smooth the feelings of the Jewish partner’s parents, now they want to embrace the couple and do all they can to make them a part of the Jewish community. 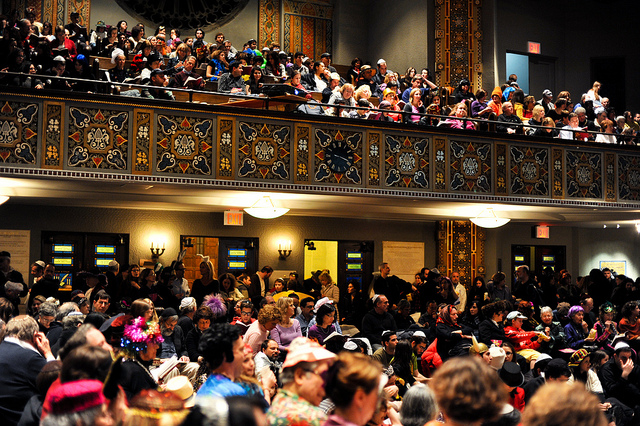 Critics of the “stat heads,” as a baseball fan might put it, say that, unlike folks on the ground, they don’t see the people behind the numbers. These critics say the major studies and their authors treat the intermarried as a statistical burden rather than living and breathing individuals making sometimes hard, sometimes welcome choices. That interfaith couples feel judged by the “tribalistic” mainstream, and that Jewish institutions should accept people as they are, not as they wish them to be. Besides, critics say, the statisticians are working against forces they can’t resist and longing for a past that cannot be recaptured.

The battle line has been drawn, and it runs right between the human record and the human heart.

Meanwhile, the sociologists and pollsters insist that they are deeply concerned about Jewish individuals, not just faceless Jewish “communities.” They study Jewish belonging not because they are scolds, but because they believe that a vibrant Jewish community — with strong institutions, crowded events, knowledgeable members and complex friendship and family ties — creates a deeply meaningful life. That the Jewish thing is not worth preserving for its own sake, but because of the difference it has made in the lives of individuals and the world.

And their research, as opposed to their gut, leads them to recommendations — and yes, judgments at a time when judging is out of favor.

The authors of the JPPI study take aim at their critics when they conclude, “Many regard all Jewish journeys and family configurations not only as equally valid, but as equally valuable for Jewish engagement and continuity. In contrast with such avowedly non-discriminatory and non-discriminating thinking, our study demonstrates that Jewish spouses matter, Jewish children matter, and, more generally, the configuration of Jewish families matters a great deal for current Jewish engagement and future Jewish continuity.”

The battle line has been drawn, and it runs right between the human record and the human heart.