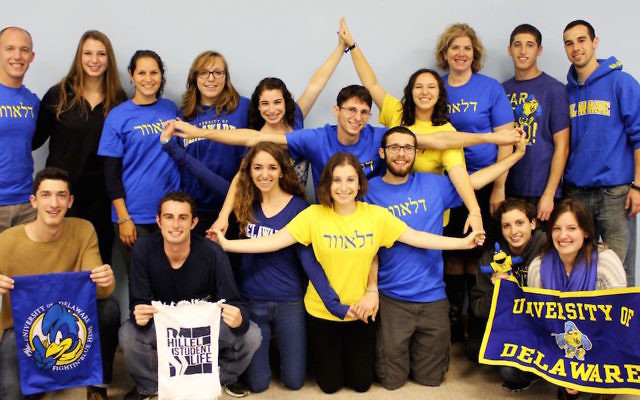 Illustrative photo of a Hillel group at University of Delaware. Courtesy

NEW YORK (JTA) — Over 300,000 Jewish college students have arrived or will arrive shortly on American campuses — and what they experience there is likely not only to broaden their minds and uproot long-held assumptions, but shake their Jewish selves to the core.

They will contend with powerful faculty and student voices accusing them of complicity in a regime of privilege and oppression here in America and of colonialism, genocide and apartheid in Israel.

The Boycott, Divestment and Sanctions movement and its campus allies have far had little impact thus far either on the investments made by universities or the policies of the governments of Israel or the United States. They are, however, diverting enormous time and resources from important work of Jewish education and community building. No less important, they are causing untold numbers of students to keep their heads down where Israel — and Judaism — are concerned, and to feel ashamed when they have every reason to be proud.

I am not afraid that Jews or other college students will fall for the Big Lie about Israel. The world is a dangerous mess right now, nowhere more than in the Middle East. Simplistic narratives of good and evil like those propounded by the BDS movement are unlikely to prove persuasive to anyone who reads up on the matter or exercises their minds.

But I do fear growing doubt among some Jewish undergraduates that the Jewish community and tradition are worthy of their involvement and commitment. I worry about increased suspicion — thanks in part to language endorsing BDS positions in the platform released by a coalition affiliated with the Black Lives Matter movement — that students can stand up for justice as Jews, and can fight mass incarceration and racism as supporters of Israel. I want all to know that they can and should maintain deep ties to the Jewish community and tradition at the same time as they claim membership in larger communities and work alongside others for universal causes of justice and peace.

My message to students, this fall in particular, is this: Have pride in your Judaism. Learn about its history and Israel’s. Keep your minds and hearts open. Maintain the moral courage to reject claims that Israel practices apartheid and genocide — because they are unequivocally false. Work to create spaces on campus where one can openly, and lovingly, question choices and actions made by Israel’s leadership, and America’s, without giving up attachment to either. As Jews, we must stand beside those fighting against inequality and injustice, and should do so regardless of the incorrect views that others hold of Judaism and Israel. As a committed Jew, I am commanded to have unceasing concern for both Jewish learning and the struggle for justice. That same passion attracts me to the State of Israel, which I view as an attempt to translate age-old Jewish values into policy. This attempt, which will always fall far short of perfection, deserves our enduring support — and, when necessary, our critique. Like any nation, Israel requires such challenge and correction if it is to remain true to its founding ideals. Israel has a lot to figure out, many wrongs to make right, incredible achievements on which to build, deep-seated currents of bigotry to overcome, a proud tradition of democracy (the only one in the Middle East) to develop, and the hopes of many millions and many centuries that it dare not betray.

But history shows that whenever people say that Jews (or any other group) are largely to blame for significant portions of the world’s ills, or that things would be perfect if only Jews stopped insisting that we, too, have a right to live in the world, or that the Jewish state, or the Jewish community, has no right to exist unless it conforms to allegedly “universal” ideals demanded of no other people as a condition of legitimate survival — something is dangerously wrong. That point of view, which sadly has a long history behind it, must be resisted.

Though they will hear its rhetoric and see its demonstrations, few students will ever visit the BDS website, where one learns that the movement is avowedly part of the Palestinian national struggle against the very existence of the State of Israel. BDS materials say nary a word about the partial responsibility of the corrupt Palestinian government in the West Bank or the murderous Hamas regime in Gaza for the failure of the peace process thus far. One hears a great deal from BDS and affiliated groups like Jewish Voice for Peace about Jewish and Israeli culpability — but nothing about mistakes made on the Palestinian side, oppression committed by it, the blatant anti-Semitism built into its policies and publications. BDS is silent about the many countries that are guilty of abuses far worse than those charged to Israel.

Much of the Middle East is in flames. The Syrian death toll has passed 400,000. And not a single Middle Eastern society guarantees equality and justice for all its citizens — women and men, Christian and Muslim — to anything like the degree that Israel does, however imperfectly.

(Arnold M. Eisen is the chancellor of The Jewish Theological Seminary.)