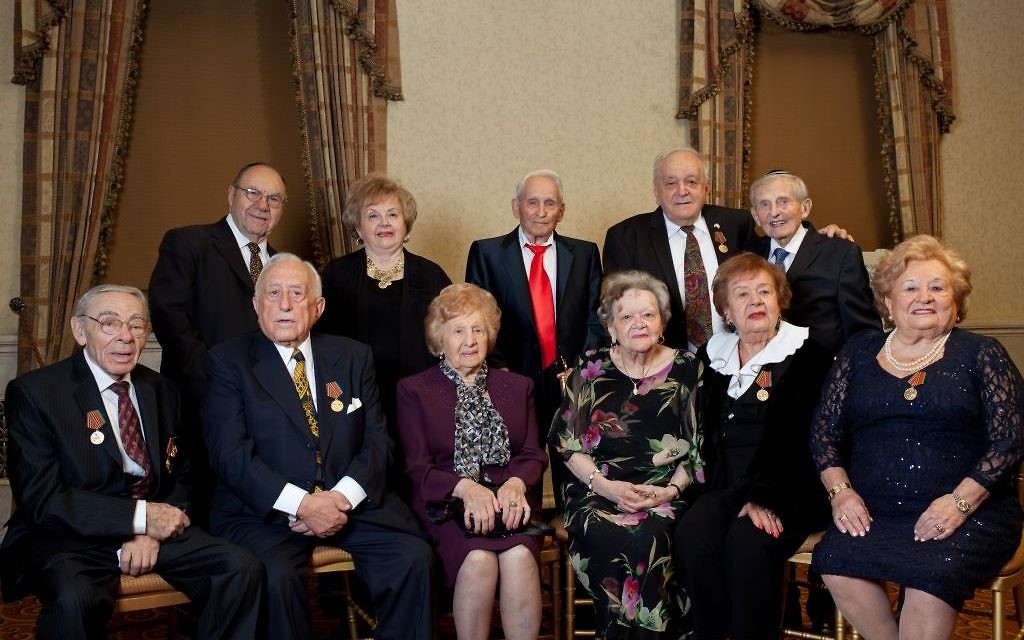 Sixteen surviving members of the Bielski Brigade, Jewish partisans who saved thousands from the Nazis and their collaborators in Belarus during the Holocaust, were honored in Manhattan Monday night by the Jewish Partisans Educational Foundation.

The group included Aron Bielski, now known as Aron Bell, the youngest of four brothers and last survivor of the family that took up arms during a bloody three-year uprising and inspired several books and a 2008 action film, “Defiance.”

“It was hell on Earth,” Aron Bell told The Jewish Week. “They were killing Jews left and right. To be a Jew was like being the worst criminal in the world. We had to survive.”

The 16 former Bielski partisans, of 50 known to still be alive, were each presented with a medallion created for the event that bears the words “We Are Here,” from a song they sang during the war, also bearing the inscrition “Honored Commander Tuvia Bielski.”

Tuvia was the eldest of the brothers. He died in 1987 in New York and was largely unrecognized for his heroism during his life. He was portrayed in the Edward Zwick-directed film by actor Daniel Craig.

In addition to Aron, the other partisan brothers were Asael and Alexander, although the family had 12 siblings at the start of the war. Although the Bielskis were able to save an estimated 1,200 Jews, they were unable to save their parents and many of their siblings, who were killed in a massacre near Novogrudok, Poland. Some left Europe before the war.

“They were martyred, and inspired by future generations to resist oppression,” said Alan Bell, Aron’s son, who visited the site of the mass grave to say kaddish for his relatves.

Aron Bell took to the podium but defered to his son to speak for him. “He graciously accepts these accolades as the last surviving member of he Bielsksi family,” Alan Bell said.

In his keynote address, Alan Dershowitz, the noted author and Harvard law professor, said the Bielskis’ courage should inspire young Jews today to stand up and defend Israel and denounce anti-Semitsm.

“Courage is not something you are necessarily born with,” said Dershowitz (See above vdeo). “You can learn many things from the incredible bravery of the Bielski brothers and all the people who risked their lives in the woods to save the lives of others.”

He said the lessons learned from history, when the Allies failed to stop Hitler’s army from becoming the mightiest power in Europe during the 1930s, should be applied today. “We have to think about this when we think about Iran in the future,” he said.

The San Francisco-based JPEF was founded in 2000 to educate the world about the estimated 30,000 Jews who rose up in Europe to fight back against Hitler’s final solution.

“The goal is to teach young people to stand up to injustice and never give up no matter how difficult the circumstances,” said Dana Tyler, the WCBS news anchor and host of the progam at Gotham Hall in Midtown.

Elliott Felson, son of a former Lithuanian partisan, Don Felson, and co-chair of the event, said the Bielskis “are an integral part of our world. My father used this [history] to show what his experiences were like. It’s important to teach young peoplet hat they can make a difference against intolerance and injustice wherever it occurs..”

The philanthropy guidebook Slingshot recently named JPEF one of the top 50 Jewish organizations in the United States. JPEF founder Mitchell Braff told the crowd he was moved to create the foundation as a filmmkaer because, despite his own Jewish education background, he had never heard stories of Jewish resistance when he was growing up.

“I never even knew what partisans were,” Braff said.

In addition to Aron Bell, the Biekski fighters honored at the dinner were:

JPEF now offers e-learning opportunities on its web site and has curricula for colleges and high schools.

In a brief phone interview with The Jewish Week upon his return to Palm Beach, Fla., Aron Bell said his memories of the war were still vivid.

He said that even before the Nazi invasion of Belarus, life had been difficult for Jews in the region. “But I didn’t feel it. My older brothers looked out for me. They were very tough.”

Recalling stories from her husband, Henryka Bell said that his brothers would try to toughen him up when he was small. At one point Asael threw him in a pond to teach him to swin. “He had no choice” but to swim, she said.

Later, when the Nazis were hunting the Bielski brothers, who had retreated into the woods to rescue other Jews and launch raids on the invaders, Aron witnessed his father, David being brutally questioned about their whereabouts. But he refused to talk. Aron himself was eventually taken to a police station and forced to dig his own grave, but also wouldn’t offer information about his brothers.

She said the days before the attending the JPEF dinner had been difficult for her husband. “He was not talking to anyone,” she said.