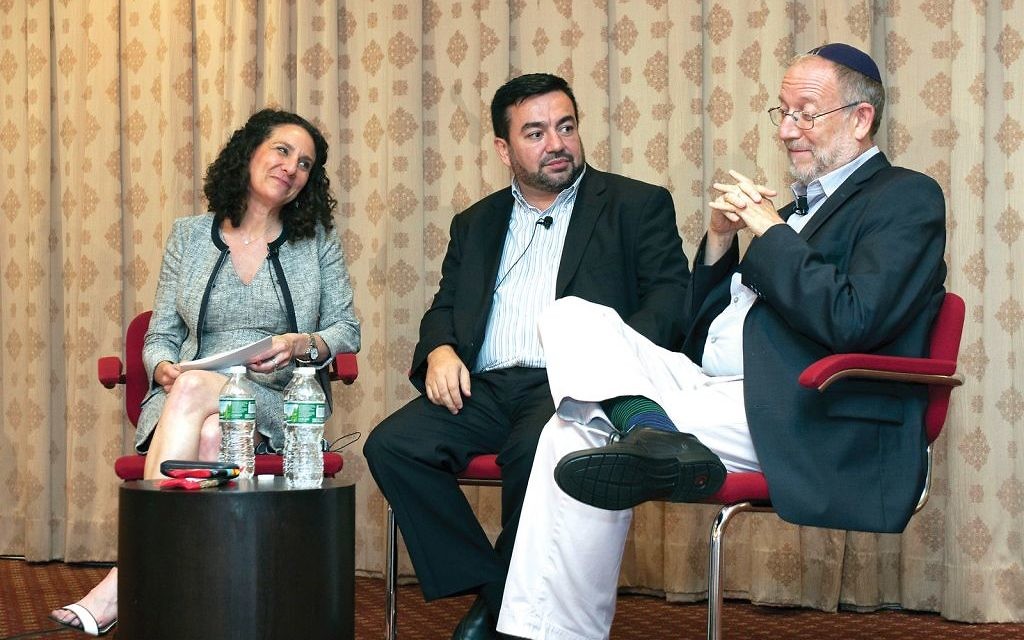 Many in the Jewish community are skeptical, if not openly critical, of Jewish-Muslim dialogue efforts, often asking, “Where are all the moderate Muslims?”

Imam Abdullah Antepli, chief representative of Muslim affairs at Duke University and co-director of the Muslim Leadership Initiative (MLI) of the Shalom Hartman Institute, has a response.

“Hineni, we are here,” he told a rapt audience of more than 350 people Monday night at Park Avenue Synagogue.

His message, delivered with both passion and warm humor, was that the majority of Muslims and Jews, whom he described as “lazy moderates … and part of the problem,” must “defeat despair and hopelessness and become rabid bridge builders” together.

“Have you undertaken a noble cause?” he challenged his audience, saying it is up to each individual to see “the other” as real people.

The imam, and his MLI co-director, Yossi Klein Halevi, an author and interfaith dialogue advocate, spoke at a Jewish Week Forum sponsored in partnership with the Shalom Hartman Institute of North America. Longtime friends, it was the first time the two were sharing their stories in a public setting.

Rachel Jacoby Rosenfield, executive vice president of the institute, moderated the discussion, the topic of which was “Across the Abyss: How a Formerly Anti-Semitic Muslim and Formerly Extremist Jew are Transforming Muslim-Jewish Relations.”

Imam Abdullah noted at the outset that he was, in fact, “a recovering anti-Semite,” because “if the poison of hate gets in your system, it is a lifelong struggle” to overcome it.

After researching Islam on his own, independent of the politics, “I couldn’t reconcile what I was studying with my hatred of Jews,” he said, and he began to meet Jews “and dive into the beauty of Judaism.”

Klein Halevi recalled his childhood in Brooklyn as the child of a Holocaust survivor who was consumed with rage against non-Jews. It set him on a path of extremism. At 14, he became “a passionate follower of the late and, for me, unlamented Meir Kahane,” the leader of the militant Jewish Defense League.

Years later, after his dramatic break with Kahane and having made aliyah, Klein Halevi served in the IDF in a Gaza refugee camp and realized he “could no longer sustain the Jew-as-victim narrative.”

Klein Halevi and Imam Abdullah, who had met through their involvement in interfaith work, described how MLI seeks to bridge the Jewish-Muslim divide by offering a yearlong fellowship program to young American Muslims from all walks of life interested in learning about Israel and Jewish life. The program includes four weeks in Israel, studying at the institute’s center in Jerusalem and touring the country.

Despite severe criticism and even death threats from fellow Muslims who say the MLI participants have been co-opted by Zionists, the program has grown in its three years. It now has about 50 alumni, and is stepping up its recruiting and planning pilot programs in Muslim-Jewish dialogue in several U.S. cities.

Klein Halevi credited Imam Abdullah for initiating the program and having the courage to persevere. The two agreed that the dialogue has to be completely open and candid to succeed, and that establishing personal relationships of trust, despite vigorous political differences, is key.

The air of racism and bigotry in this presidential race can and should be a catalyst for Muslims and Jews to work together, said Klein Halevi. He noted that the safety of Jews around the world may be determined by “the quality of our relations with Islam,” and he asserted that while not underestimating the danger of radical militants, “the American Jewish community needs to be at the forefront of efforts to protect the physical and emotional safety of American Muslims.”