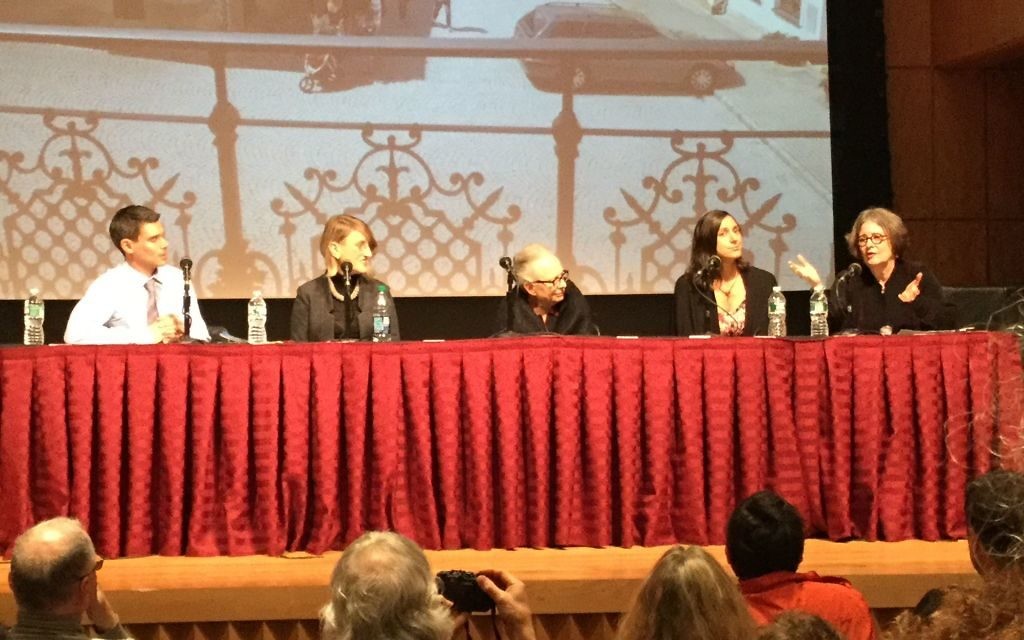 A lively, sometimes contentious symposium at the Center for Jewish History on Sunday emphatically showed that Jewish museums in Central and Eastern Europe have reached a state of fruition worthy of celebration and vigilance. The symposium celebrated a new double issue of East European Jewish Affairs. Its participants threw themselves into exploring the move of Jewish museums “away from nostalgia and toward … a new self-definition,” as Judith Siegel, director of academic and public programming at the CJH put it.

The afternoon had two panels. First, Olga Gershenson, Barbara Kirshenblatt-Gimblett, Anna Manchin, and Ruth Ellen Gruber discussed museums in, respectively, Moscow, Warsaw, Budapest, and the Czech Republic. Gershenson described the new Jewish Museum and Tolerance Center in Moscow: housed in a former bus garage and designed by the US firm Ralph Appelbaum Associates, the museum would have been impossible in the Soviet era, but as Gershenson described it, is compromised by its founders’ ties to the Putin regime.

By contrast, Barbara Kirshenblatt-Gimblett explained that since POLIN, Museum of the History of Polish Jews, where she is chief curator of the core exhibition, was founded by a non-governmental group, she and her colleagues have a much freer hand than their counterparts in Russia.

Anna Manchin described three Budapest institutions: the House of Terror Museum (former home to both the Hungarian fascists and the Soviet-era secret police); the Jewish Museum and Dohany Street Synagogue; and the Holocaust Memorial and Documentation Center. None of these, in her view, represents what it really means and meant to be Jewish in Hungary, and one of them, the House of Terror, elides the cooperation in 1944 of Hungarian gentiles in deporting Hungarian Jews to the death camps.

Ruth Ellen Gruber’s portrayal of the Ten Stars program, a series of ten single-themed exhibitions in significant Jewish sites across the Czech Republic, left me wanting to visit immediately.

The second panel, a roundtable rather than formal talks, opened the discussion to museums in the United States. Edward Rothstein of the Wall Street Journal offered a meditation on changes in American museums over the last 50 years: he saw them move from shrines to great art or great culture to “identity museums,” or “hyphenated museums,” e.g. of Irish-American or Italian-American experience, all of which, except Jewish museums, ended on a note of triumph.

This was gently contradicted by Pamela Nadell’s account of her work at the National Museum of American Jewish History in Philadelphia, which is nothing if not triumphalist, ending with the success stories of eighteen Jews that were possible “only in America.” Norman Kleeblatt, chief curator at The Jewish Museum in New York, complicated matters by asserting that “ambiguity is an important principle” in curation, and especially at Jewish museums.

The last speaker, Benjamin Nathans, a chief planner of the Jewish Museum in Moscow returned to Olga Gershenson’s paper on the museum and tore it apart. Though painful to listen to, his attack made it clear that the team who planned the central exhibition were well aware of the compromises they had to make to open a museum with the approval of Vladimir Putin. He convinced this listener that despite the irony of a Tolerance Center that preaches tolerance only to some, Nathans and his team had succeeded in one of their goals, to show the unresolved tensions between Jewish and non-Jewish Russians. Masha Gessen, longtime critic and biographer of Putin, spoke in defense of one of Gershenson’s points, but there was no time for Gershenson herself to reply at length. The nuance and thoughtfulness of Nathans’s attack left this listener eager to read his article.

Above all, the afternoon’s talks demonstrated that, first, the tremendous liveliness and energy of the museum worlds in both the US and Central and Eastern Europe have indeed enabled new self-definitions for Jewish museums; and second, that the sometimes murderous political tensions of our time have not allowed those self-definitions to grow freely. In today’s Jewish museums there is huge room for growth but none for nostalgia.

Until January 20, the issue of East European Jewish Affairs is available free online.It can also be consulted at the New York Public Library online or in print.

Elizabeth Denlinger curates the Carl H. Pforzheimer Collection of Shelley and His Circle at the New York Public Library.