Ask Gemma Kirby about how her flight was, and you might be surprised what you hear.

Gemma “The Jet” Kirby, 25, considers soaring several hundred feet through the air at 75 miles per hour an average day’s work. As the youngest performing human cannonball in the Ringling Bros. and Barnum & Bailey circus — she just celebrated her one-year “cannonversary” — some might consider her a big shot.

But her day job isn’t the only thing that gives her a rise.

Kirby, who grew up in Minneapolis, is a passionate feminist and a proud Jew who has even managed to lead makeshift Passover seders on the fly during the circus’ grueling schedule.

Wearing her silver sequined bodysuit, silver gloves, flight goggles and stage makeup, the statuesque Kirby spoke to The Jewish Week during a brief intermission last week at the Barclay’s Center, in a room directly behind the circus ring. Two performers practiced nearby, balancing on one another’s shoulders before hitting the ring, while another did back flips to warm up. The ringleader’s booming voice was audible through the music.

Though Kirby had been launched out of a cannon just minutes before — gracefully arching her back in mid-flight and executing a forward somersault — she was unruffled and poised, the rigors of circus life at a temporary remove.

“Bringing joy and excitement to others is why I do what I do,” she said, adding that she was raised on the ethic of helping others. “And who has to be asked twice to be a human cannonball?” 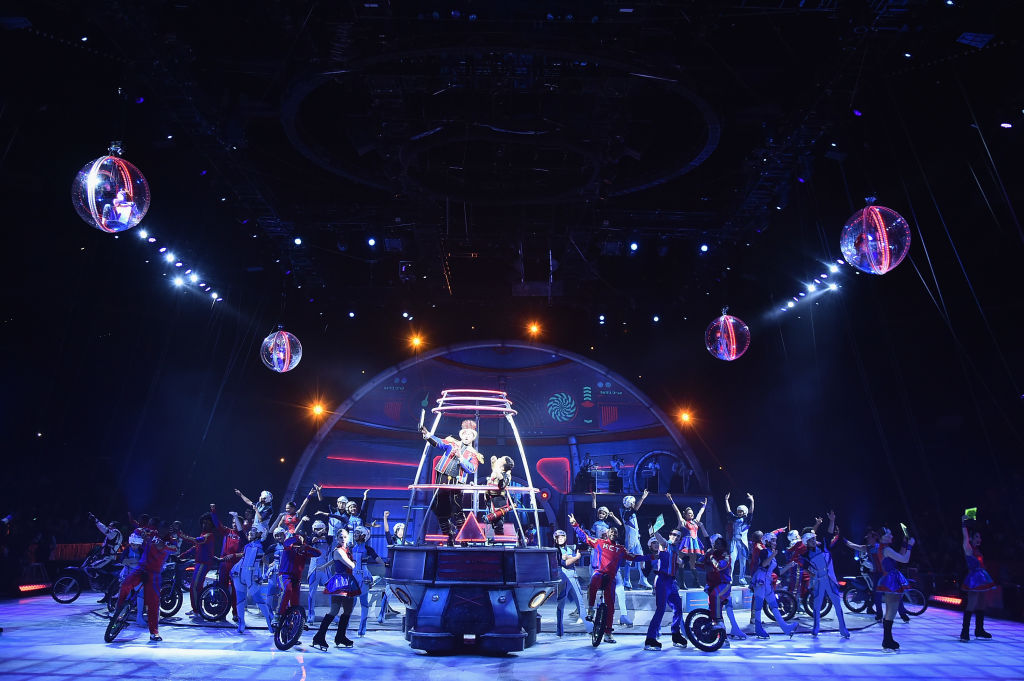 Ringling Bros. and Barnum & Bailey’s “Out of this World” at Barclays Center on March 2, 2017 in New York City. Ringling Bros. Getty Images

Not Kirby, it turns out. The cannonball, she said, actually found her. She began her journey as a dancer at the age of 7, and later attended a circus school in St. Paul to explore aerial arts. Her talent as a flying trapeze artist caught the attention of the Big Apple Circus, where she performed from 2011-2012. Ringling then asked her to join its show.

“I fit the description of what they were looking for — I’m not afraid of heights, obviously,” she joked. “It was the right time in my life. They didn’t have to ask twice.”

And so Kirby took her place as part of an enduring staple of American popular culture stretching back more than 150 years.

While the job commands a certain glamour, it remains one of the most dangerous in the world. According to the late British historian A.H. Coxe, 30 human cannonballs have died on the job, usually the result of bad landings. Human cannonballs have been know to blackout in mid-air, due to the extreme G-force, which can be nine times as strong as normal gravitational pull.

Though Kirby knows the dangers — compressed air launches her upwards of 75 feet in the air and into inflatable targets about 200 feet away — she remains fearless. (She does not wear a helmet.) “Life’s about the challenge,” she said. To date, she has not been injured on the job. 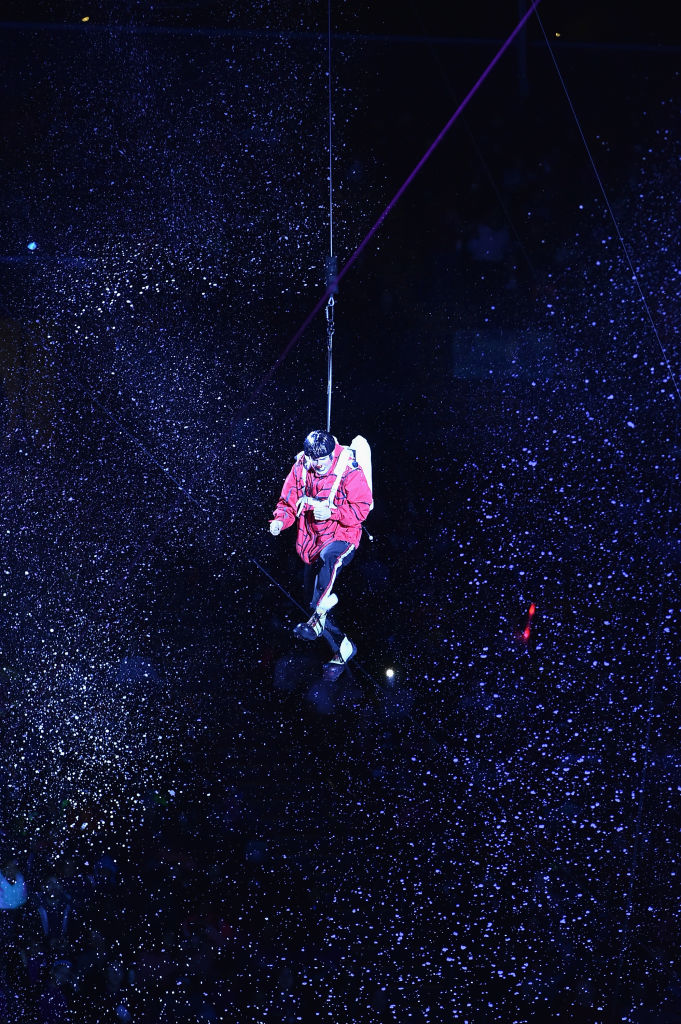 Ringling Bros. and Barnum & Bailey’s “Out of this World” at Barclays Center in NYC. Getty Images

To stay fit for the job, Kirby, like many other circus performers, logs 14-hour days filled with strength training, stretching, dance practice and rehearsals.

“One thing audiences might not understand is the tough schedule,” said Kirby, who said getting used to train life is a must. “No one pours this much of their life into their job unless they are 100 percent passionate.”

Despite her hectic schedule — her Ringling “Xtreme” troupe performs 850 shows over two years — Kirby finds ways to bring her Jewish identity with her on the road. She has a menorah, which she proudly lights in the window of her train car every Chanukah. And, along with two of her fellow circus-mates (one Jewish, one just curious), she was able to celebrate Passover, her favorite Jewish holiday, while on the move.

“I led a seder while we were on tour!” Kirby exclaimed. She described how she and her two circus mates set up the ritual feast below a bridge in a “sketchy” park outside Washington, D.C., dining on matzah ball soup and a festive cup of wine. “It’s one of my fondest memories — bringing my faith and traditions with me wherever I go.”

A Birthright Israel trip in 2009, when she was 19, helped solidify her Jewish identity. “I always knew I was Jewish growing up, but visiting Israel made me feel truly connected to my roots,” Kirby said.

While in Israel, Kirby received a Hebrew name at a special ceremony on Masada: Michal.

“I wasn’t given a Jewish name when I was born, so one of the rabbis on the trip asked if I wanted one,” she said. “When I’m performing, I think of myself as Gemma, but Michal is now a deep part of who I am.”

Alongside the hard work and the adventure of Passover seders on the run, there are some funny perks for Kirby. For instance, watching people’s reactions when she tells them about her day job. Most people, she said, “Flat out don’t believe me.”

While staying in a Brooklyn hotel last week during the circus’ late-February run, Kirby relayed how she heard one hotel guest ask another, “Did you know that there’s a cannonball staying in this hotel?”

Though the physical strain of circus life is draining, Kirby says she’s not in the business to feel “happy or content.”

“At this point in my life, it’s about growing pains,” she said. “I would much prefer discomfort to comfort. You don’t move forward if you’re too comfortable.”

Kirby also hopes her example will help other young women challenge gender stereotypes, adding that she speaks with groups of students around the county while on tour.

“When young girls come to the circus and see what I do, maybe they’ll say, ‘Hey, I didn’t know that’s something a girl can do!’” said Kirby, who speaks with groups of students around the country. Seeing young women lose interest in sports, math and science starting in middle school is a trend that needs to be fought, she said. “‘If the human cannon ball is a girl, what does that mean for me?’ That’s what I hope they’ll ask.”

Ten years from now, Kirby does see herself settling down with a family, and possibly pursuing higher education. (She holds a BA in psychology and hopes some day to get a graduate degree in American Sign Language.)

But, though she’s used to moving like, ahem, a shot, there’s no rush. “I want to do what I love until I don’t love it anymore,” she said. “For the moment, that’s the cannon.”

As an afterthought, she added, “My grandma is going to be so psyched to see this! She can’t get enough Jewish news.”

And with that, Gemma Kirby, the Human Cannonball and nice Jewish girl from the American heartland, zips up her silver sequined body suit, pulls down her flight goggles and prepares for another blast of a day at the office.