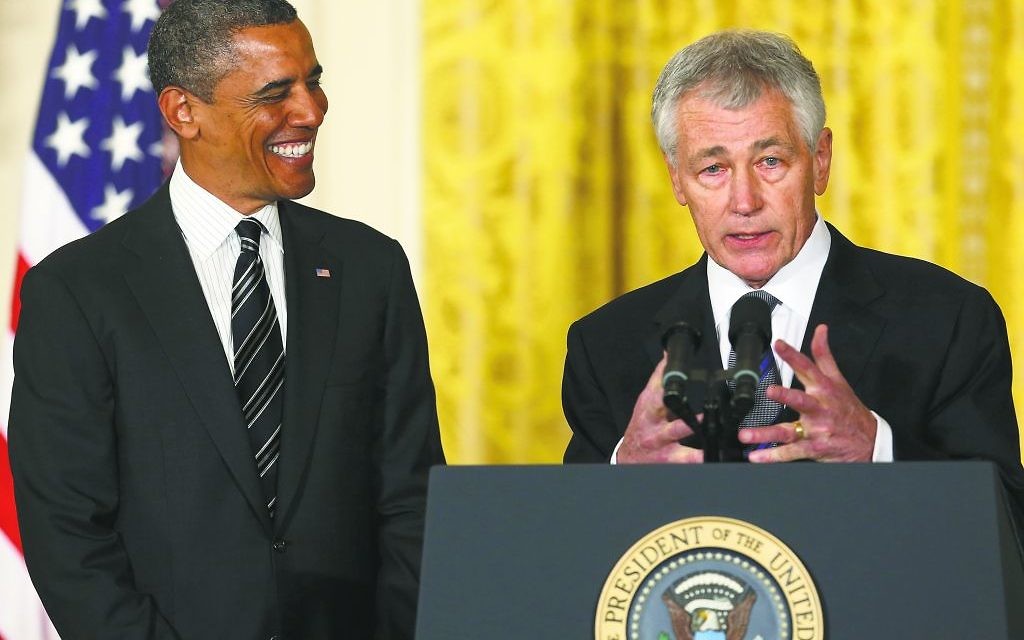 Washington — Now that Chuck Hagel is officially President Obama’s nominee to be secretary of defense, Jewish groups concerned about Hagel’s record on Israel and Iran are faced with a choice.

Do they fight hard to derail his nomination, joining common cause with Republican opponents? Or do they temper their fire for a Vietnam War hero who insists that opponents have distorted his views on Israel and has a good chance of securing one of the most sensitive posts in the U.S.-Israel relationship?

So far, it appears to be the latter.

Jewish opponents appear to be toning down the criticism that greeted the news last month that Hagel, a Republican who served as a U.S. senator from Nebraska from 1997 to 2009, likely would be Obama’s defense choice.

The Anti-Defamation League, one of the most outspoken critics of Hagel’s potential candidacy, issued a statement reiterating some of its concerns after Obama made the announcement Monday — but deferred to the president.

“Sen. Hagel would not have been my first choice, but I respect the president’s prerogative,” Abraham Foxman, the ADL’s national director, said in the statement.

In his statement, Foxman alluded to past proposals by Hagel to engage with Iran and with terrorist groups such as Hamas and Hezbollah; the nominee’s skepticism of sanctions and the efficacy of a military strike on Iran; and his criticism of Israel in how it deals with the Palestinians.

Foxman called on Hagel to address positions that the ADL chief said seem “so out of sync with President Obama’s clear commitment on issues like Iran sanctions, isolating Hamas and Hezbollah and the president’s strong support for a deepening of U.S.-Israel strategic cooperation.”

The National Jewish Democratic Council drew back from the tough criticism it leveled against Hagel in 2007 when he was considering a run as a Republican presidential candidate. NJDC said Monday that it is now “confident” Hagel would follow Obama’s lead on Israel.

Former Rep. Barney Frank (D-Mass.), who has asked to be appointed interim senator should Sen. John Kerry (D-Mass.) become secretary of state, on Monday softened his opposition to Hagel for his comments on Jews and gays.

The shift on Hagel in some Jewish corners may be enough to give the 11 Jewish senators room to support Hagel, or at least to not oppose him — a significant gain in a body in which senators tend to take their cues on special interests from colleagues who belong to the group in question.

The dimming of the prospect of an all-out lobbying effort by some pro-Israel groups against Hagel’s candidacy appears to be the product of White House outreach to Jewish groups in recent weeks, pushback by Hagel’s supporters and Obama’s own record on Israel.

The American Israel Public Affairs Committee was silent on the nomination — and not just as a matter of its traditional reticence to comment on nominations. Capitol Hill and pro-Israel insiders told JTA that AIPAC has not taken a stand in this battle.

Steve Rosen, a former foreign policy director for AIPAC who now consults for a number of pro-Israel groups, said it would not help Israel’s interests to undercut a candidate for this key security post.

“It’s about making friends, not getting into fights with people,” Rosen said.

Rabbi Steve Gutow, who directs the Jewish Council for Public Affairs, said his public policy umbrella group would not take a position on Hagel but that he looked forward to a thorough vetting process.

In an interview with the Lincoln Journal Star in his home state of Nebraska, Hagel said his record of support for Israel was “unequivocal” and had been subject to “falsehoods and distortions.”

“I have said many times that Iran is a state sponsor of terrorism,” he said. “I have also questioned some very cavalier attitudes taken about very complicated issues in the Middle East.”

Hagel suggested that differences on policy were a matter of nuance and tactics, not of goals.

“I have not supported unilateral sanctions” on Iran “because when it is us alone they don’t work and they just isolate the United States,” he said. “United Nations sanctions are working. When we just decree something, that doesn’t work.”

In the interview, Hagel did not refer to the controversy over his use in 2006 of the term “Jewish lobby” and his assertion when he was a senator that his loyalty was to the United States, not Israel.

Alon Pinkas, a former Israeli consul general in New York and a contributing fellow at the Israel Policy Forum, said Israeli leaders naturally would have concerns about past Hagel statements. But Pinkas said they would deal with Hagel not as the loquacious one-time senator who often was critical of Israeli policy, but as the defense secretary hewing to a policy set by Obama of a close U.S.-Israel security relationship.

“What a senator says at a three-martini lunch and what a secretary of defense says are two different things,” Pinkas said.

Obama made clear the White House would aggressively tout Hagel’s bona fides as a wounded Vietnam War veteran, twice calling him a “patriot.” There also was a veiled reassurance to Israel in Obama’s remarks.

“Chuck recognizes that American leadership is indispensable in a dangerous world,” Obama said. “I saw this in our travels together across the Middle East. He understands that America stands strongest when we stand with allies and with friends.”

Peter Medding, a political scientist at Hebrew University, said Israel’s leaders understand that the White House shapes the defense relationship and it would be counterproductive to create distance with the U.S. president at a time of increased regional tensions.

“Making policy is a matter for Obama, and the Israelis are not interested in taking on Obama at this time,” Medding said.

Hagel is by no means out of the woods. A number of Republican senators already have pledged to vote against him. His apostasy on President George W. Bush’s Iraq policies — in 2007, Hagel supported Democratic legislation requiring a troop withdrawal from Iraq — is still an open wound in the party. A lone Republican senator could hold the nomination unless the Obama administration is able to muster 60 votes, which could be daunting in a chamber in which Democrats control 55 of the 100 seats.

Support among Democrats and liberal groups also is not assured. Gay groups want to hear more about his apology for opposing a 1998 ambassadorial nomination because the nominee was gay. In the Senate, Hagel was a pronounced conservative on domestic issues, including government spending, abortion and gun control.

A range of rightist pro-Israel groups remains committed to upending the nomination, among them the Zionist Organization of America, Christians United for Israel, the Republican Jewish Coalition and the Emergency Committee for Israel, which on Monday launched a website headlined “Chuck Hagel is not a responsible option.”

Among centrist Jewish groups, the American Jewish Committee has written to Democratic senators urging them to oppose the nomination.

“AJC has shared our concerns with members of the U.S. Senate, who have the responsibility to ask the probing questions about Hagel’s record and vision,” AJC said in a statement.

For their part, Hagel’s Jewish allies have pushed back hard. J Street, Americans for Peace Now and Israel Policy Forum all have endorsed him.

“It is particularly troubling that some claiming to represent the pro-Israel community have tried to impugn Sen. Hagel’s commitment to the U.S.-Israel special relationship and our countries’ shared security interests,” J Street director Jeremy Ben-Ami said in a letter sent to all senators.